Email
HONG KONG: ONE Championship's dual-belted king Martin "The Situ-Asian" Nguyen and Road FC's dominant atomweight queen Ham Seo-Hee were handed their crowns at the inaugural Asia MMA Awards' Male and Female Fighters of the Year as the leading lights of mixed martial arts gathered for a gala celebration of the sport as it continues to take the region by storm. 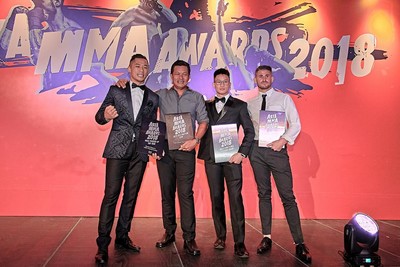 For the Vietnamese-Australian Nguyen (11-3) the award caps off an incredible 12 months that saw him capture ONE's world featherweight and lightweight belts - both via knockout. The 29-year-old has now established himself as arguably the best pound-for-pound fighter in Asia and was on hand at the Qube at PMQ in the heart of Hong Kong's Central district on Friday night. "I'm very honoured to get recognition for all the hard work and dedication I put into this sport. I want to thank everyone who has been supporting me from day one, especially the fans," Nguyen said. "It's been a rollercoaster ride this year, but don't ever count me out. That's the worst thing you can ever do is count me out. I'll be back in the winning column this year." South Korean Ham (18-8) was also there to share the spotlight and to raise a glass to a year that has seen her win and defend her atomweight title and further add to her reputation as one of the toughest fighters on the planet. "I've been training hard for the past six year and this year is the culmination of all my work," said the 31-year-old. "This award has inspired me to keep going and continue to train harder. I'm very happy and I'm very surprised. I want to that all my team for their support." Around 200 of Asian MMA's major players descended on Hong Kong for a night that reflected on the greatest moments the sport witnessed over the past 12 months while warming everyone up for a future that promises plenty more action. The world's major promotions shared the spoils on the big night, with the UFC's stunning first foray into the Chinese market - UFC Shanghai: Bisping vs Gastelum last November - being named Event of the Year, while South Korea's "Mr Perfect" Kang Kyung-Ho (14-8, one no contest) was on hand in Hong Kong to accept the Submission of the Year for the triangle choke that finished Guido "Ninja'" Cannetti (8-3) at UFC Fight Night 127. The UFC's wildly popular Red Dela Cruz was also up on stage to accept the Ring Girl of The Year award. UFC Asia vice-president Kevin Chang said it was a great honour to collect the Event of the Year for its first event in Mainland China. "It's been an amazing year for the UFC and I want to thank everyone who has been there from day one," Chang said. "I remember how it was six or seven years ago, not many people knew what MMA was. We're just really glad to be here to represent what the sport really means. "Next year we're hoping to open more and more markets in Asia." Along with Nguyen's honour, the Singapore-based ONE Championship had Philippine bantamweight hero Kevin "The Silencer" Belingon (19-5) handed Best Walkout for the traditional Ifugao tribe song that takes him out into battle, while there was pandemonium among the Hong Kongers present when local heavyweight hero Alain "The Panther" Ngalani (4-4, one no contest) was handed the Knockout of the Year award for his historic 13-second demolition of Hideki "Shrek" Sekine (7-2) at ONE: Total Victory in Jakarta. Cheers also went off around the room when the Fight of the Year was awarded to the bantamweight bout between Moon Jea-Hoon (10-11) and Asakura Kai (5-1) at Road FC 039 - a true epic ended when Moon landed the knockout blow with seconds remaining in the third. "The Asia MMA Awards are a celebration of all the things we love about the sport and pay tribute to the people who get in that cage and put on a show for us all," said Matt Eaton, founder and CEO of Hong Kong-based Asia MMA award hosts and organisers Tap Media. "We want to give these fighters the recognition they are due, but to also honour those who are sometimes missed by the spotlight,  from head coaches to gym owners, photographers, ring girls and the brands that support the fighters on their journey." The debut of the Asia MMA Awards in Hong Kong also precedes a huge weekend for combat sports in Southern China. On Saturday (15 Sept), the Copa De Hong Kong BJJ tournament returned to the Tsim Sha Tsui Community Hall for its fifth year, while further up North in Guangzhou on Saturday night saw the rebirth of Legend FC. The Asia MMA Awards gala dinner was supported by Hong Kong's top craft brewery Young Masters, Harley Davidson, Opro, Tune Talk, Cellarmaster Wines, production agency RESET, digital and virtual reality agency Shadow Factory, plus Mojo Nomad hotels. To follow everything that's happening in Asian MMA, and to find out who's doing what to whom, head to The Fight Nation - brought to you by Tap Media. For more information, please contact Matt Eaton at [email protected] All the Asia MMA Awards Winners Best Walkout - Kevin Belingon, ONE Championship Photographer of the Year - David Ash Best Technical Equipment - Venum Amateur Fighter of the Year - Theebaan Govindasamy, MIMMA Best Destination Gym - Tiger Muay Thai & MMA Ring Girl of the Year - Red Dela Cruz, UFC Event of the Year - UFC Shanghai: Bisping vs. Gastelum Most Functional Clothing Brand - Reebok Rookie of the Year - Hwang In-Su, ROAD FC Gym of the Year - Team Lakay Submission of the Year - Kang Kyung-Ho subs. Guido Cannetti (triangle) - UFC Fight Night 127 Head Coach of the Year - George Hickman, Tiger Muay Thai & MMA Knockout of the Year - Alain Ngalani KO'd Hideki Sekine - ONE: Total Victory TFN Readers' Choice Award - Max Leali Fight of the Year - Moon Jea-Hoon vs. Asakura Kai, Road FC Male Fighter of the Year - Martin Nguyen, ONE Championship Female Fighter of the Year - Ham Seo-Hee, ROAD FC
Related Items:Asia MMA Awards, Ham Seo-Hee, Martin "The Situ-Asian" Nguyen, MMA, ONE Championship, Road FC
Share
Tweet
Share
Email
Click to comment