By V.K. Santosh Kumar in Nur-Sultan 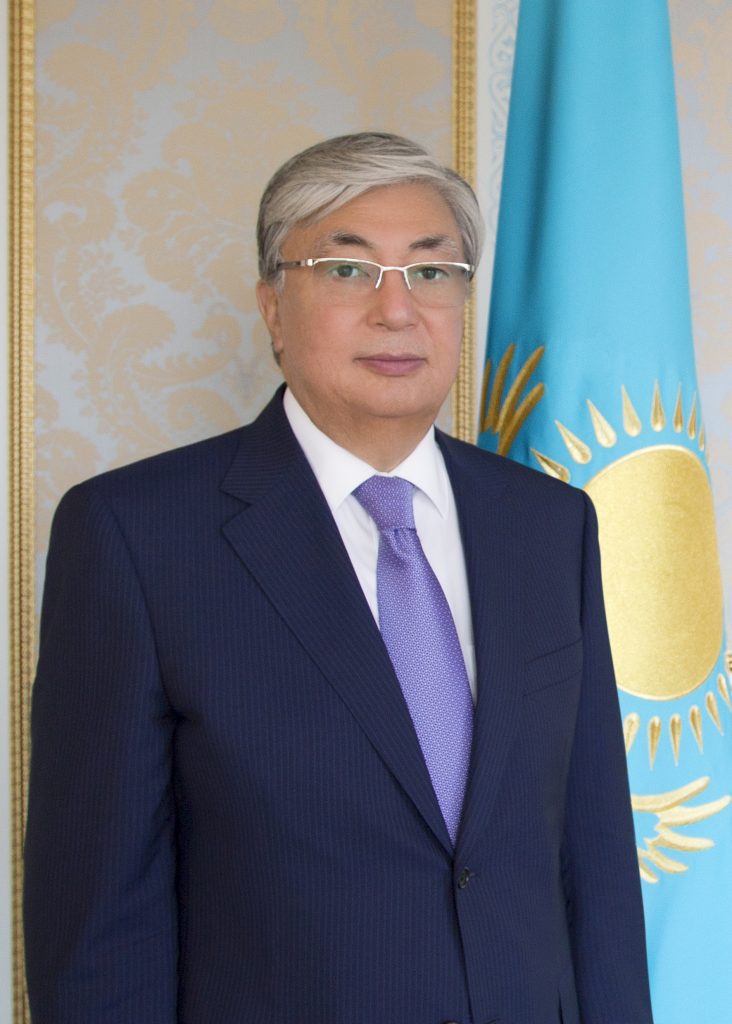 Now that, as expected, Mr Kassym-Jomart Tokayev (above) has been elected the second President of Kazakhstan, the question on everyone’s lips is what his policies will be: Will he take the country in a new direction or continue with the agenda set by his predecessor Nursultan Nazarbayev?

Kazakhstan has a new leader in three decades. Mr Tokayev was elected with 70.76 per cent of the votes cast (9,261,460) after the election on June 9. It was brought forward by more than a year after Mr Nazarbayev, who had led the country since 1989, surprisingly announced his resignation in March.

The first succession process in Kazakhstan’s post-Soviet history has been relatively smooth. The Republic did not face a situation like the one experienced by neighbouring Uzbekistan in 2016 when long-serving President Islam Karimov died suddenly from a brain aneurysm and it led to a hasty transition of power. 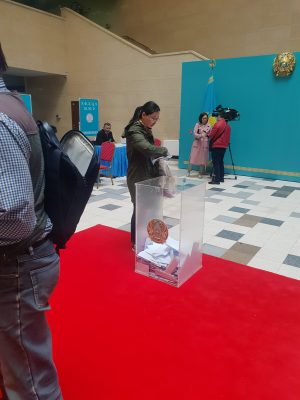 A woman casting her vote at the Palace of Schoolchildren in Nur-Sultan.

Mr Petrov also announced that Amirzhan Kossanov of the Ult Tagdyry United National Patriotic Movement received 16.02 per cent of the votes, Daniya Yespayeva of the Ak Zhol Democratic Party 5.2 per cent, Toleutai Rakhimbekov of the Auyl (Village) Party 3.2 per cent, Amangeldy Taspikhov of the Kazakh Trade Unions Federation 2.07 per cent, Zhambyl Akhmetbekov of the Communist People’s Party of Kazakhstan 1.82 per cent and Sadybek Tugel of the Uly Dala Kyrandary (Eagles of the Great Steppe) Public Association 0.92 per cent.

Voter turnout was 77.4 per cent, including 160,203 young citizens casting their ballots for the first time.

I met Kazakh political analyst Talgat Kaliyev (below) along with a group of foreign journalists in Nur-Sultan. He runs a centre that conducts exit polls and studies the outcome of elections. 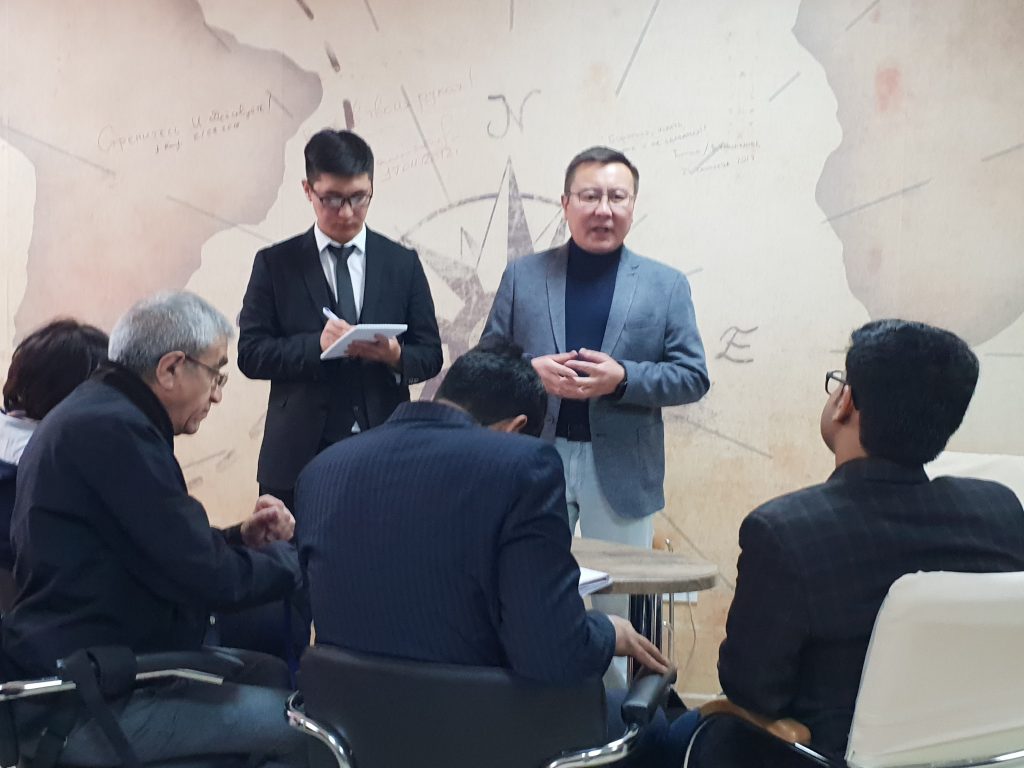 The nattily dressed and articulate analyst said that the presidential election is a milestone for the country and the people.

“I have seen the partition of the Soviet Union and also seen bloodshed during that time. But, after Nursultan Nazarbayev took over, he ensured stability by implementing welfare policies for the people. His sudden resignation was shocking for everyone. But we respect his decision,” said Mr Kaliyev.

He underlined that the country is looking for a peaceful transition of power without any social disruption. “There are certain challenges before the newly-elected government like reduction in export dependency, maintainability in oil prices and various welfare schemes they need to initiate and so on,” said Mr Kaliyev.

He pointed out that this election saw several youth participating actively in the campaigning and voicing their opinions, which he felt was good for the democratisation process that is underway in Kazakhstan. 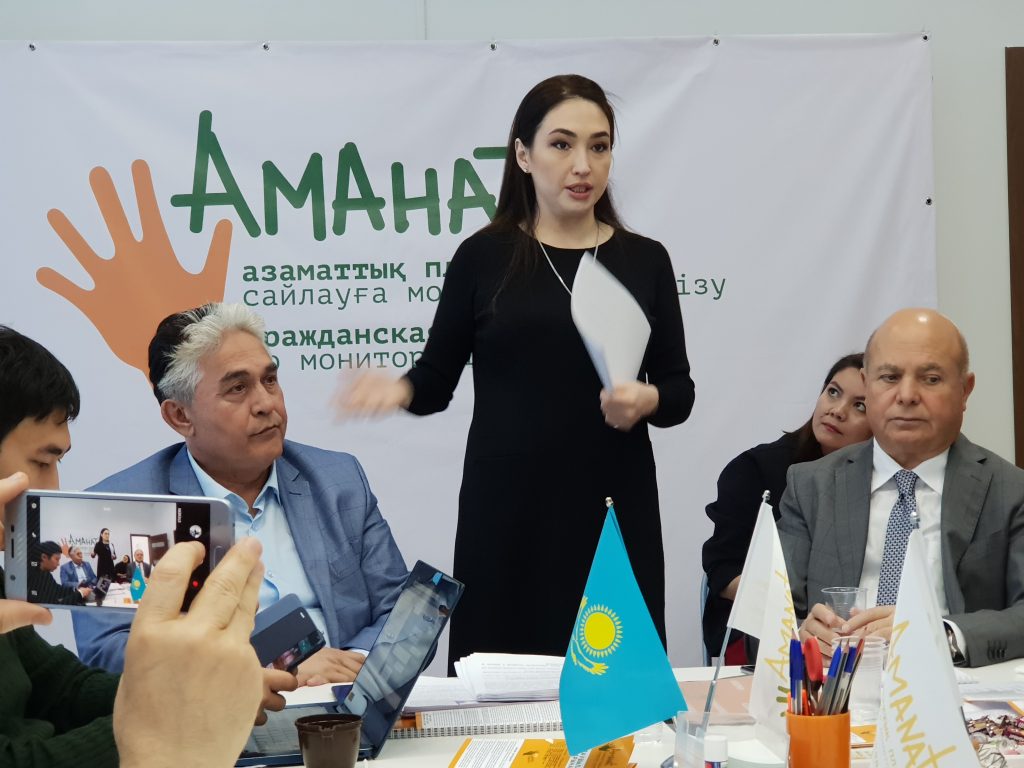 Ms Jazira Duissebekova (above) of the independent election observer group Amanat told me and my fellow journalists that there were several other firsts in this presidential election in Kazakhstan.

“For the first time in history a female candidate (Daniya Yespayeva) ran for the presidency. The very first TV debates were held which can be seen as democratisation and liberalisation of the political system,” said the opinionated entrepreneur. “Several people wrote in to Amanat seeking clarification on election issues and details about the candidates.”

Amanat, which means legacy in the Kazakh language, was formed two months ago by a group of individuals, including former Presidential candidate Daumbekov Musagali (below, third from left), who wanted to ensure fair play in the election. They actively disseminated news about the election process and the backgrounds of the seven candidates from a makeshift office in Nur-Sultan. 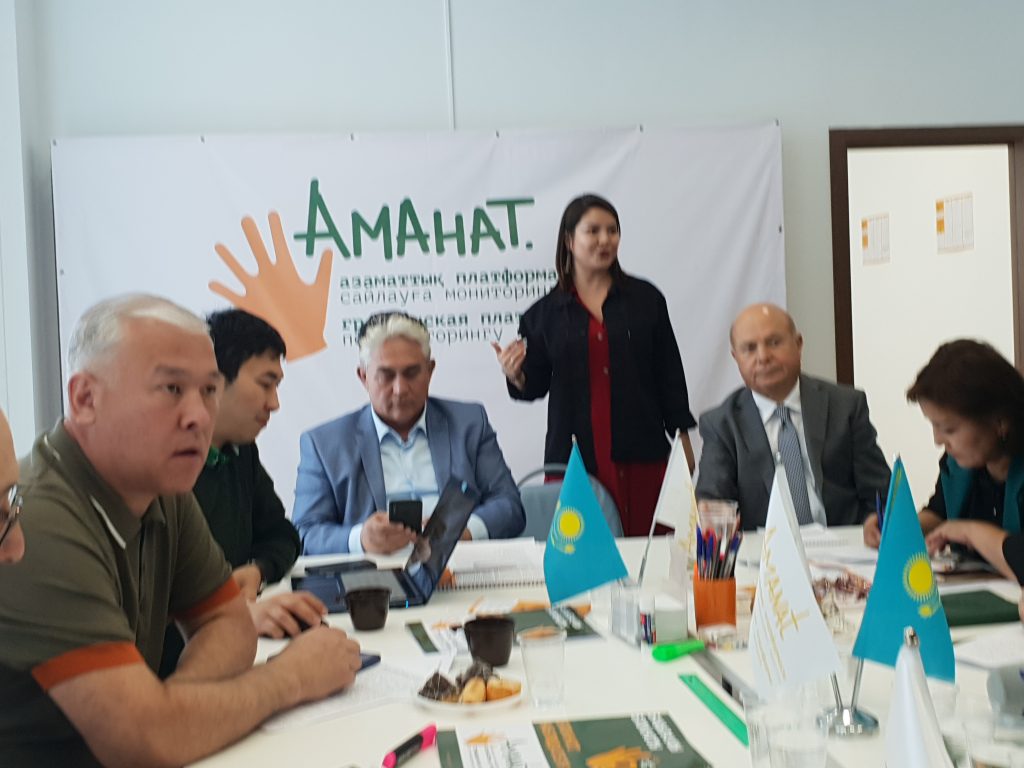 The CEC had promised that the election will be fair and transparent. It accredited 1,013 observers from nine international organisations. There were also 147 others, including journalists and election commissioners, from 41 foreign countries to observe the poll.

“It’s important to have a smooth transition and stability,” said Firangiz Yassupova, a 24-year-old green enthusiast I met in Nur-Sultan. “Some people may not be happy with a Nazarbayev ally taking charge. But Kazakhstan cannot afford confusion and chaos at this juncture.”

Romanian member of parliament Valeriu-Andrei Steriu said: “I admire what Kazakhstan is doing. It’s better to have stability.”

Mr Tokayev has received congratulations from many leaders, including the Uzbek and Kyrgyz presidents.

“We must unite to work for the future of Kazakhstan,” Mr Tokayev’s campaign website quoted him as saying.

The advantage for Mr Tokayev is that he has Mr Nazarbayev’s endorsement and that of the ruling Nur Otan party. The 66-year-old has been a Nazarbayev confidant for a long time.

Since being appointed foreign minister in 1994, he has held several key domestic and foreign affairs roles, including prime minister, chairman of the Senate and director-general of the United Nations office in Geneva.

His experience, technocratic nature and loyalty were obviously the reasons for the Nur Otan party to select him as its presidential candidate. But his elevation as president is likely to pose challenges for him on the economic, political and foreign policy fronts.

He will have to manage the complex internal balance of power that Mr Nazarbayev, 78, oversaw for decades, guide Kazakhstan through an economic slowdown and skilfully balance Russia and China which are competing for influence in the country.

Importantly, he will have to fill the big shoes of Mr Nazarbayev, who is acknowledged as the founder of the modern Kazakh nation. 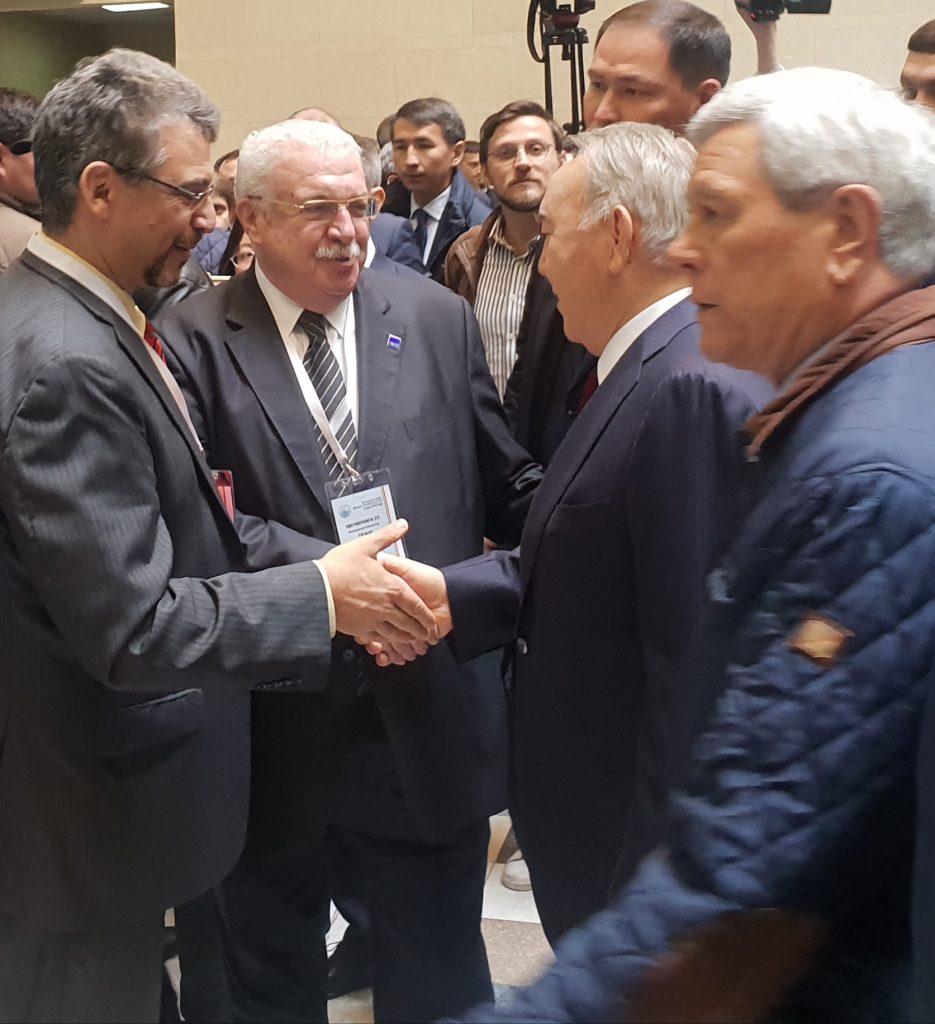 Mr Nursultan Nazarbayev (second from right) arriving to vote at the Palace of Schoolchildren in Nur-Sultan on June 9 morning.

Mr Nazarbayev guided Kazakhstan from the Soviet era through the economic and political turbulence of the 1990s and into the oil-fuelled boom of the 2000s. Over that time, he oversaw significant gross domestic product (GDP) growth and improvement in living standards. His government also built Astana, a glitzy new capital in the northern Eurasian Steppe that replaced Almaty in 1997 and which in March was renamed Nur-Sultan in honour of him.

Mr Tokayev’s familiarity and experience will ensure stability in Kazakhstan in the coming months. He can also count on the advice of Mr Nazarbayev, who will continue to serve as the chairman of the National Security Council and Nur Otan. The ex-president also took personal control of the oil-rich nation’s sovereign wealth fund last month and has been named Yelbasy, or head of the nation.

Mr Nazarbayev recently insisted that he won’t overshadow Mr Tokayev in office, telling campaign officials that there’s “only one president in the country, we won’t allow any dual authority” at a meeting of the ruling party on May 25. “We’ll all help the president,” he added.

I watched him confidently cast his vote at the Palace of the Schoolchildren (polling station No. 58) in Nur-Sultan on a cool, slightly overcast June 9 morning. He was accompanied by his daughter and Senate Chair Dariga Nazarbayeva.

Mr Tokayev’s biggest challenge in the short-term will be economic. Kazakhstan’s economy has begun slowing due to the 2014 crash in global energy prices and an ailing banking sector that has been mired with non-performing loans.

The country’s yearly GDP growth has dropped from over 10 per cent throughout most of the 2000s to just over 4 per cent.

In January, Mr Nazarbayev demanded a minimum target of 5 per cent GDP growth and called for a “clean up” of the banking sector after Tsesnabank, one of the country’s largest banks, needed a US$1.2 billion state bailout.

In February, he also called for the resignation of Prime Minister Bakhytzhan Sagintayev’s government over its failure to address socio-economic issues.

Such measures, however, have not resolved the underlying problem of Kazakhstan’s slowing economy, which is heavily dependent on oil and natural gas exports. The onus is now on Mr Tokayev to fix things.

With his first term secured, Mr Tokayev’s priorities will be to proceed with key infrastructural projects, such as Kazakhstan’s logistics and transport network within the New Silk Road, facilitating increased trade between Europe and Asia and to create 1 million jobs by 2025 through support for rural-based entrepreneurs.

The new President, who is fluent in Kazakh, Russian, English and Chinese, will also have to deftly balance the interests of Russia and China, the powers with the most influence over Kazakhstan.

Kazakhstan has long been strongly aligned with Russia, serving as a member of the Moscow-led Eurasian Economic Union and Collective Security Treaty Organisation. But, following rapid economic growth, China has become a key trade and investment partner for Kazakhstan through the Belt and Road Initiative.

Mr Nazarbayev was able to strike a balance between Russia and China by pursuing integration with both to a certain extent while preserving Kazakhstan’s sovereignty and autonomy. But any political instability in the country could threaten this balancing act.

Mr Tokayev has indicated that he will maintain Mr Nazarbayev’s foreign policy position.

This was endorsed by Kazakhstan’s Deputy Minister for Foreign Affairs Roman Vassilenko (below) at meeting with a group of foreign journalists, including me, at the Foreign Ministry on June 8. He said that Kazakhstan will continue to have “equally strong” beneficial cooperation with China and Russia despite the power transition. 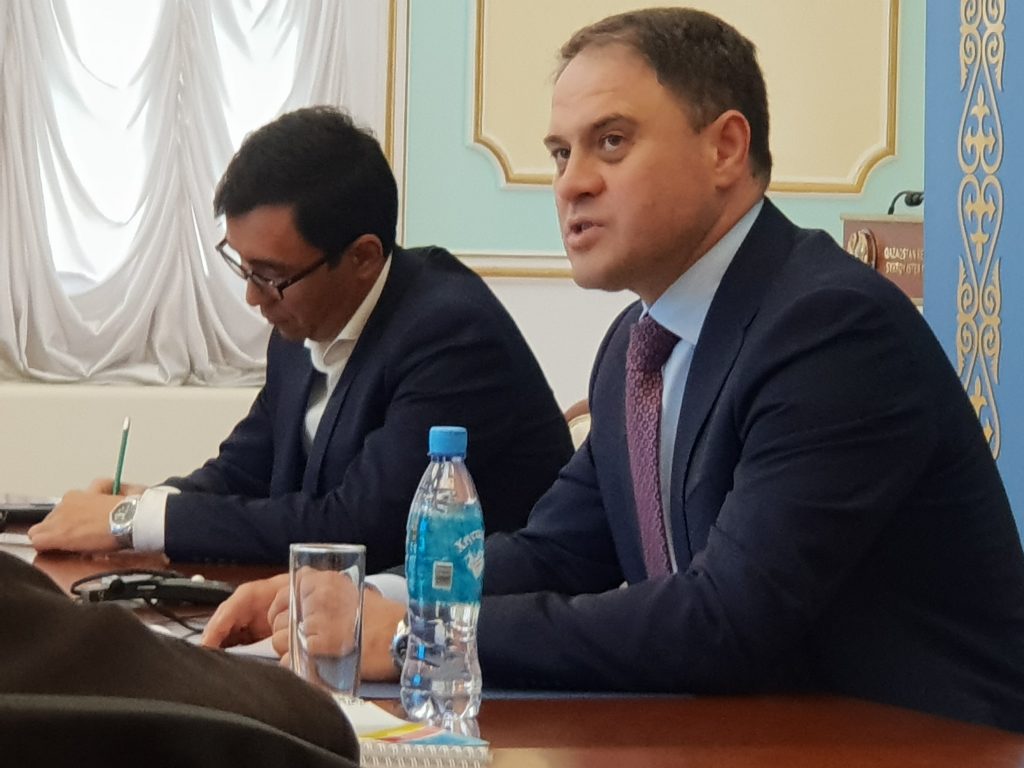 “None of the seven candidates has proposed a major change to the country’s foreign policy,” Mr Vassilenko noted.

According to the Chinese Foreign Ministry and Chinese embassy in Kazakhstan, China-Kazakhstan trade reached US$19.8 billion in 2018. China is Kazakhstan’s second largest trade partner, which accounts for 13.5 per cent of the total trade volume of the country. Russia ranks at the top with 20.6 per cent,

“As the biggest inland country, Kazakhstan will surely support the China-proposed Belt and Road Initiative, as this will largely change the geographic disadvantage of the country into an advantage that serves as an important hub of the ancient Silk Road,” Mr Vassilenko said.

He added that, while the country has undergone major infrastructural development, the election is vital to facilitate social and political stability.

“Kazakhstan must confirm the continuity, predictability and stability of its domestic and foreign policies,” he said.

The Deputy Foreign Minister also said that the newly-elected President will set out the agenda for development and progress, adding that the government will play a key role in implementing his vision.