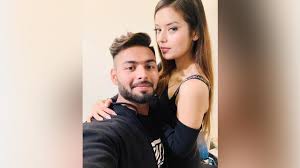 DELHI, January 18: Indian cricketer Rishabh Pant made a name for himself during the recent tour of Australia, where he played excellent knocks with the bat and also excelled in sledging from behind the stumps, especially at the home side’s captain Tim Paine.

Most thought he would be away from the news for a while as he was rested for the one-day series Down Under.

But on January 16 the wicket-keeper again began to make waves. He introduced his girlfriend to the world, particularly to his load of fans in India.

He posted a photo of himself and Isha Negi on Instagram and captioned it: “I just want to make you happy because you are the reason I am so happy.”

The girl also shared the photo on her Instagram account and captioned it, “My man, my soulmate, my best friend, the love of my life.”

The player’s millions of fans in India expressed their approval. But they were left wondering who this girl is?

A look at her Instagram profile shows that she has 37.2k followers. She is an entrepreneur and interior designer. She has several photos of herself in her account.

Isha is an alumni of Convent of Jesus and Mary in New Delhi. She also studied at Amity University. Apparently, literature was her choice of subject.

Not much else is know about the relationship between the pair. Perhaps Isha will now on be seen at matches cheering on Pant to shine further.