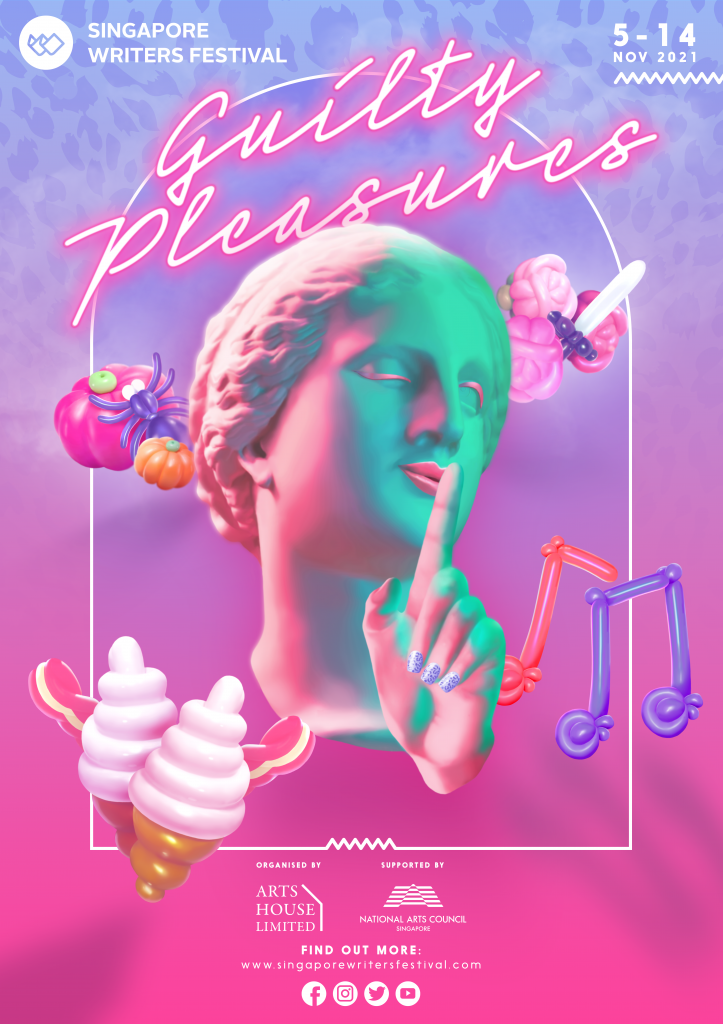 The 24th edition of the Singapore Writers Festival (SWF) will be back from 5 – 14 November 2021. Presented by Arts House Limited (AHL) and commissioned by the National Arts Council (NAC), this year’s hybrid festival (with some programmes held in-person and online) will bring together local and international authors to share candid thoughts andjuicy opinions, creating safe spaces for the public to indulge in their literary pleasures.

2021 Festival Theme: Guilty Pleasures
It’s time to crack open that romance novel under your pillow because this year’s theme is all about exploring the things we love but are too shy to admit. SWF 2021 invites authors and audiences to delve into the complicated relationships between guilt and pleasure and discover others out there who share the same literary loves.

This year’s festival will have something for everyone and festival goers should get ready for provocative stories from international and local authors, film writers and musicians and bond over the guilty pleasures that bring us together.

Not by the book: A new genre for Singapore’s festival scene

Without a doubt, this year’s tantalising theme will raise an eyebrow or two but at the same time, inject a bit of fun in what has been a trying period. Festival Director Pooja Nansi said: “Everyone needs a lighthearted pick me up. This year’s rather cheeky theme hopes to bring about some cheer and laughter to the local and international literary community. By exploring complicated relationships between guilt and pleasures, we are hoping that these novel pursuits will appeal to a wider audience and signal that the festival is not afraid of pushing boundaries to move Singapore’s literature scene forwards.”

A cocktail of international and local writers, hosts and musicians

Aspiring poets will not want to miss Ocean Vuong as he shares about finding our voice in a world rife with narratives. Geetha Sukumaran, together with two other festival authors, will share their views on the evolution of modern Tamil, Chinese and Malay Poetry.

Listen to the prolific Hamed Ismail as he shares his writing journey for the past 30 years. For a personal meet-the-author session, join Yan Geling as she discusses history, intimacy and love amid chaos.

Comic fans of G. Willow Wilson’s Ms Marvel will be able to hear her share her thoughts on creating a superhero for millenials. R.L. Stine discusses his popular series Goosebumps that took a generation of readers by storm.

Nobody embodies the concept of ‘you are what you wear’ more than Tan France who will talk about how we can use fashion as a tool for empowerment and empathy. Get groovy with Rai and other festival writers, as they share their favourite hits from the 80s and 90s in Mixtape Memories.

Join food author Pamelia Chia as she discusses how we can balance nutrition, value for money and great-tasting food, and satisfy your hunger pangs by watching Bjorn Shen as he whips up a selection of guilty pleasure dishes.

Low Eng Teong, Deputy Chief Executive (Sector Development) of the NAC, said: “The NAC has been a champion of Singapore’s arts scene for the last 30 years. We are proud of how far the SWF has come as one of Asia’s premier multilingual literary festivals; a space for local and international writers to inspire one another. AHL has always been an integral and highly valued festival partner of Singapore’s literary activities. From this year on, we are pleased that it will helm the festival and continue to uplift our community through the love for books.”

Executive Director of AHL Tan Boon Hui said: “Arts House Limited has been involved in programming segments of the festival for numerous years. As such, organising this year’s festival is a natural progression in our mission to celebrate written and spoken word artists in Singapore and beyond. We hope to continue to nurture a love for books and literature through year-round literary activities that deepen public engagement with SingLit and encourage (or for this year, entice) Singaporeans to support our local literary talents; to inspire the exploration of new worlds and ideas and uplift communities especially during these challenging times.” 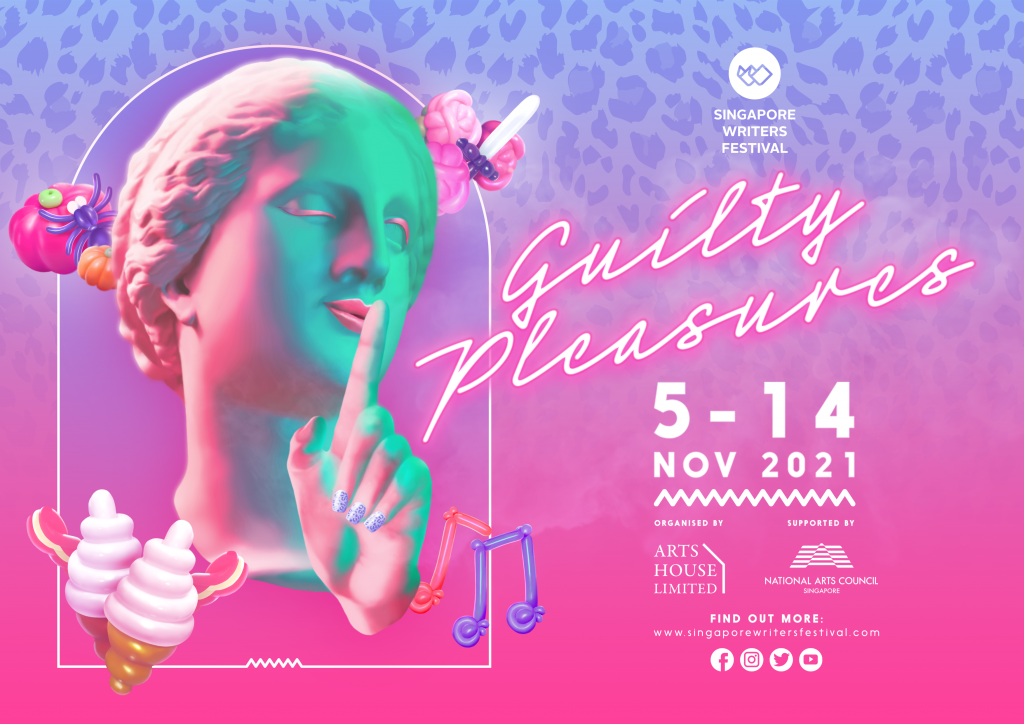 Bjorn Shen
Starting out as a dishwasher and kitchen hand, Bjorn’s 17-year culinary career has taken him through professional kitchens in Singapore, Australia,
Denmark, Indonesia, and Dubai. While today’s culinary world prides itself on creativity and innovation, Bjorn believes that these can only work when one first understands tradition. After all, food is about people, places and history. He was an Adjunct Lecturer at the Culinary Institute of America in Singapore from 2012 to 2017. Bjorn opened award-winning restaurant Artichoke in 2010.

G. Willow Wilson
Willow Wilson is an award-winning comics writer, prose author, essayist and journalist. She is the author of the acclaimed novel The Bird King (2019), co-creator of the Hugo and American Book Award-winning series Ms Marvel (2013 – 2018). She has written for superhero comic book series including The X-Men, Superman and Wonder Woman. Her first novel, Alif the Unseen, won the 2013 World Fantasy Award for Best Novel, and was long-listed for the 2013 Women’s Prize for Fiction.

Geetha Sukumaran
Geetha Sukumaran is a poet and a bilingual translator. Her English translation of Ahilan’s poetry Then There Were No Witnesses was published in 2018. A recipient of the SPARROW R Thyagarajan Literary Award for poetry, her latest collection Tea: A Concoction of Dissonance published by Dhauli Books (2021) was published in collaboration with the poet Ahilan and artist Vaidheki. She is the founder of Conflict and Food Studies and a doctoral student in the Humanities programme at York University, Toronto.

Ocean Vuong
Ocean Vuong is the author of the New York Times bestselling novel, On Earth We’re Briefly Gorgeous. A recipient of a 2019 MacArthur “Genius” Grant, he is also the author of the critically acclaimed poetry collection, Night Sky with Exit Wounds, a New York Times Top 10 Book of 2016 that won multiple awards including the T.S. Eliot Prize. A Ruth Lilly fellow from the Poetry Foundation, his honours include fellowships from the Lannan Foundation and more.

Rai
A singer-songwriter for over 20 years, Rai is an established artist who has performed on many stages globally. A lifelong student, he constantly seeks new opportunities in various artistic fields to learn and excel in. Currently, he is one of the hosts of CNA’s Talking Point, and also an educator in the field of creative writing and songwriting.

R.L. Stine
R.L. Stine has been writing horror stories and scaring young readers for over 30 years. His bestselling Goosebumps series has sold more than 400 million copies in the United States. In 2015, The Goosebumps Movie quickly topped the box office in America, and Netflix released a film based on Stine’s Fear Street series in 2021. A winner of multiple Kids’ Choice Awards from both Nickelodeon and Disney Adventures, Stine received the Horror Writers Association’s Lifetime Achievement Award in 2014.

Tan France
Tan France has been a successful fashion designer for over 15 years and is one of the stars of the Emmy-winning makeover hit and Netflix re-boot, Queer Eye. Tan recently released his New York Times best-selling memoir, Naturally Tan, the first season of his viral YouTube series, Dressing Funny and hosts the Queer Icons podcast. Before his media career, Tan was the creative mind behind successful brands including the popular ladies clothing lines, Kingdom & State and Rachel Parcell, Inc.

Yan Geling
Yan Geling is one of the most acclaimed novelists and screenwriters writing in the Chinese language today. Her best-known novels in English are The Secret Talker, Little Aunt Crane, The Uninvited, White Snake and Other Stories, and The Lost Daughter of Happiness. Many of her works have been adapted for film and television by acclaimed directors such as Zhang Yimou, Chen Kaige and Joan Chen. She has published over 40 books, has won over 30 literary and film awards and her work has been translated into 19 languages.

FESTIVAL PASS PLUS: $35
Includes access to all programmes including international headliners
Available from 3 Sept
FESTIVAL PASS: $20
A taster pass that gains you access to selected programmes, excluding international headliners
Available from 3 Sept
SEPARATELY TICKETED PROGRAMMES
Select experiential programmes to be ticketed separately. To be announced closer to date. Stay tuned for more updates.
Festival Passes and tickets to other ticketed programmes can be purchased via SISTIC:
https://swf2021-live.sistic.com (will go live on 3 Sep, 12pm)
For all other ticketing details, please refer to the ticketing guide and FAQs on the SWF website.
CATEGORY
Early Bird savings for FPP and FP (20%)
$28 and $16 3 Sep – 30 Sep 2021
Festival Pass Plus (FPP) $35 1 Oct – 14 Nov 2021
Festival Pass (FP) $20 1 Oct – 14 Nov 2021
Concessions for Students/NSFs/Seniors: $28 and $16 1 Oct – 14 Nov 2021

The Singapore Writers Festival, one of Asia’s premier literary events, started in 1986 as a biennial festival. Now presented yearly by Arts House Limited, SWF is a much anticipated event on the cultural calendar, presenting the world’s major literary talents to Singaporeans while shining a spotlight on home grown and Southeast Asian creative talents.

The Singapore Writers Festival is one of the few multi-lingual literary festivals in the world, celebrating the written and spoken word in Singapore’s official languages – English, Malay, Chinese and Tamil.
For more information, please visit www.singaporewritersfestival.com.

Arts House Limited
Arts House Limited is a not-for-profit organisation committed to enriching lives through the arts. AHL manages two key national monuments located in the heart of Singapore’s Civic District – The Arts House, a multidisciplinary arts centre with a focus on literary programming, and the Victoria Theatre &
Victoria Concert Hall, a heritage building that is home to the Singapore Symphony Orchestra.

AHL was set up in 11 Dec 2002 as a public company, with the National Arts Council as its strategic
partner. It was officially renamed Arts House Limited on 19 Mar 2014. For more information, visit https://artshouselimited.sg/

The National Arts Council champions the arts in Singapore. By nurturing creative excellence and supporting broad audience engagement, our diverse and distinctive arts inspire our people, connect communities and profile Singapore internationally. We preserve our rich cultural traditions as we
cultivate accomplished artists and vibrant companies for the future. Our support for the arts is comprehensive – from grants and partnerships to industry facilitation and arts housing.

The Council welcomes greater private and corporate giving to and through the arts, so that together we can make
the arts an integral part of everyone’s lives. For more information on the Council’s mission and plans, please visit www.nac.gov.sg