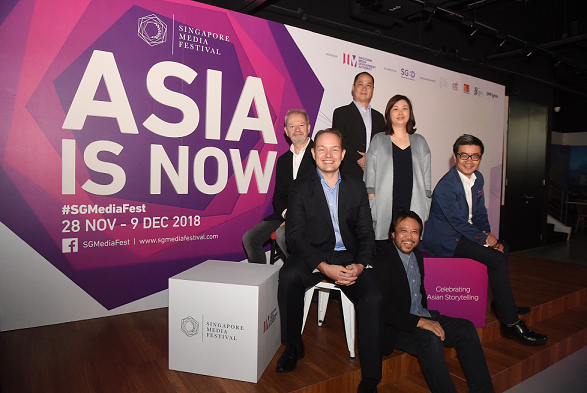 SINGAPORE: The Singapore Media Festival (SMF) is back from 28 November to 9 December 2018 for its fifth instalment to celebrate the best of Asian storytelling. This year’s SMF will feature new platforms for budding Asian media talent to be discovered and trained by international experts, a robust showcase of Asian films, as well as a vibrant celebration of Singapore films to be opened to the public.

Robert Gilby, Chairman of the SMF Advisory Board, said: “Asian stories and storytellers matter to the world. There has never been a better time for Asian stories and talent to shine bright on the global stage. The Singapore Media Festival is the most diverse platform in the region and unique in the way it brings together the best talent to celebrate these stories, foster new collaborations and discover innovative ways of storytelling. The time for Asia is now.”

NEW PLATFORMS TO PROPEL NEXT GENERATION OF STORYTELLERS

SMF will feature new platforms for aspiring media talent from Asia to be discovered and mentored by international experts.

Finalists will get the chance to pitch their ideas to an expert panel. Winners in each pitch category will take home a S$3,500 cash award, and potentially receive an opportunity for their scripts to be bought for S$15,000.

Two key figures in the short-form video content realm – Curt Marvis, CEO and Co­Founder of QYOU and Andy Kaplan, Media Industry Advisor and Non-Executive Chairman of QYOU India – will headline the ATF Leaders’ Summit. Other industry heavyweights who will be present include Howard Owens, Founder and Co-CEO of Propagate Content, an independent premium content production company.

Helmed by reputable experts such as Francesco Calvi, one of Australia’s leading lighting designers and Natalie Gee, Creative Director and Head of Production at NBCU International, the Asian Academy Creative Campus will be free for all Singaporean students studying in the media, communications and creative fields.

Young filmmakers from ASEAN and South Korea will also benefit from the 2-week Film Leaders Incubator (FLY) 2018, which is organised by the Busan Film Commission and runs from 21 November to 4 December.

Hosted in Singapore for the first time this year by the Singapore Film Commission (SFC) in cooperation with SGIFF, the FLY programme will be helmed by filmmakers from Singapore and South Korea. This includes founder of Mocha Chai Laboratories, Chai Yee Wei, and Korean filmmaker Shin Dongseok, who has won numerous awards such as the BIFF FIPRESCI and the Udine Far East Film Festival White Mulberry Awards.

The FLY programme will feature short film workshops and mentoring sessions that will equip young filmmakers with skills such as directing, cinematography and editing.

Nuseir Yassin will speak on topics including building digital audiences, digital storytelling for online platforms, and how audience response has shaped his content. He will also personally select three Singapore content creators to be mentored and produce their own one-minute videos. Interested participants can submit a one-minute video to [email protected] by 4 November to get a chance to meet and work with Nuseir Yassin.

The focus of the four-day SMF Ignite conference and exhibition from 4 to 7 December will be “The Convergence of Big Data, AI and Storytelling”.

In competition at the SGIFF’s Southeast Asian Short Film Competition are:

Beyond discovering films from the Philippines, media professionals at SMF will also have the opportunity to interact with Filipino media industry veterans through a host of programmes and initiatives that spotlights on the Philippines.

SINGAPORE FILMS TO BE CELEBRATED AT SMF

SMF will also feature a celebration of Singapore films by home-grown filmmakers:

“The media industry in Singapore and the region has truly grown from strength to strength over the years. Singapore has a unique position as a connecting hub in Asia, and we welcome the creation of more made-with-Singapore content with a universal appeal. The Singapore Media Festival is the best platform in the region to make these collaborations happen and to bring our stories from Asia to the world.” said Howie Lau, Chief Industry Development Officer, IMDA.

For more details of the Singapore Media Festival, visit www.sgmediafestival.com. Media materials may be accessed in the Festival e-Media Kit here:https://bit.ly/2ybmSUs.

The Singapore Media Festival, hosted by the Infocomm Media Development Authority, is set to become one of Asia’s leading international media events, where the industry meets to discover the latest trends, talents and content in Asia for Film, TV and digital media. Taking place from 28 November to 9 December 2018, the Singapore Media Festival brings together the newly-minted Asian Academy Creative Awards (AAA) and established media events such as the Singapore International Film Festival (SGIFF), Asia TV Forum & Market (ATF) and ScreenSingapore and SMF Ignite.