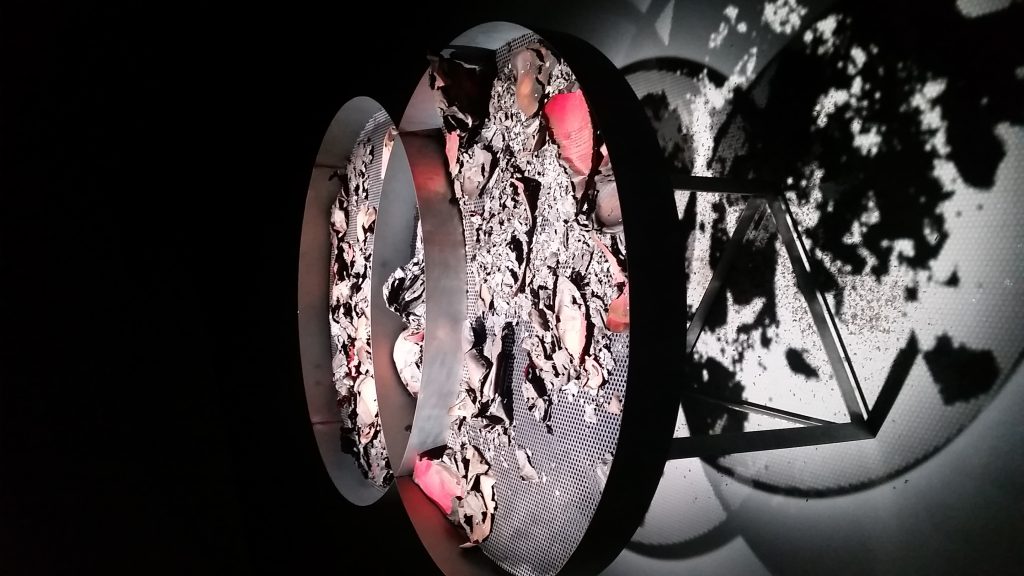 Irish artist Jesse Jones’s multimedia installation Tremble, Tremble, created for Singapore’s LASALLE College of the Arts, is inspired by women’s rights to bodily self-determination. The visual and aural cocktail has also been infused by her experience of Singapore’s history and culture. Jones spent two months as artist in residence at LASALLE in July and August 2017 during which time she was drawn to the mythologies behind the Chinese seventh month and other eclectic influences unique to Singapore.

“I believe much of the parallels in the Irish and Singaporean consciousness came from our shared experience of British colonial law,” she said. “I have tried to explore this in Tremble, Tremble. In particular I was drawn to the Hungry Ghost festival and how much spiritual connections to the dead can create a direct material way of dealing with the past and shaping the future.”

Tremble, tremble is undoubtedly a bold, complex artwork in a new iteration with Singaporean influences. Jones, for example, has starkly constructed an incinerator with burnt residue (photo), similar to the one that the Chinese use to burn money as a symbol of offering to wandering spirits. But her creation actually transcends beyond the modern influences that touched her. Her attempt is to rinse our conscious and subconscious minds free from millennia of patriarchal dogma.

To convey her views, she has created a female giantess, who dominates two screens. Irish actress Olwen Fouere appears like a figure from a Shakespearian shipwreck, at times tiny and at others huge, intoning powerful texts that she and Jones devised, which includes the words from a medieval manuscript, The Malleus Maleficarum, for identifying and prosecuting witches.

To maximises emotional and visual impact, the viewing space is semi-enclosed by full-height black voile curtains, with the image of a woman’s bare arm depicted on the upper part of each one. An assistant sweeps the curtains along their ceiling tracks to circle the audience in a spooky embrace.

The title Tremble Tremble is taken from a women’s movement protest in Italy, from the 1970s, which called for wages for housework. It was orchestrated by the feminist academic Silvia Federici, whose book on the patriarchal appropriation of women’s bodies in order to fuel the capitalist system with workers and soldiers has had a major influence on Jones’ work. Jones hopes the title evokes “this trembling sense of being on the precipice of massive political change”.