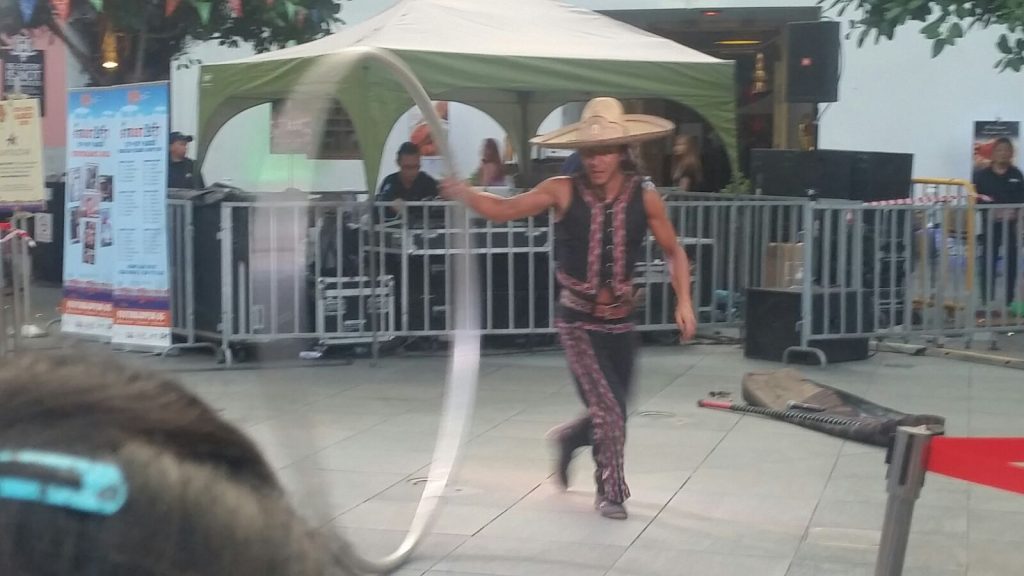 Round and round he whirls, displaying precision and strength. One slip or a bad move could result in crushed fingers or a serious body injury. But Pancho Libre is totally focused on what he is doing, dismissing from his mind the fact that he is performing on hard concrete. The Mexican knows that he is the master of his art and has confidence that a mis-step by him leading to a fall would be rare.

The cyr wheel is difficult to manipulate and control. It is an acrobatic apparatus that consists of a large ring made of aluminium with a diameter of about 15cm taller than the performer. Pancho stands inside it and grasps its rim, causing it to roll and spin gyroscopically while performing acrobatic moves. It is a large hoop, but he deftly spins it and makes it to follow his commands while rotating along with it all the while.

Over four days, from March 14, the Mexican mesmerised the crowds with his agility and ability at Clarke Quay during the StreetFest, part of the Singapore Festival of Fun. “He was absolutely stunning,” said Amanda Lim, 28, who watched his show on March 17 with her three children. “He has great skills, is fearless and has a nice sense of humour.”

Pancho earned thunderous applause each time he performed. But he was modest in his assessment of his abilities. “I am certainly not the world’s best,” said the 35-year-old from Otumba, a town near Mexico City. “There is always someone better than me. But I always like to do something different. I have a lot of skills, so I mix elements like gymnastics and comedy in my acts. I do very dangerous things like head-stands on a five-metre pole. I have to hold the crowd, so I do exciting things. At the same time, I have to be careful that I do not lose control and balance.”

Several experts reckon that Pancho, whose real name is Francisco Sandoval, is among the best in the business. He admits that he is among the top three in his country. “Not many people in the world do the cyr wheel, probably about 200,” he said. “I can make it spin like a coin. It requires a lot of strength, balance and technique. You should know when to remove your fingers as the wheel rotates, else they could get crushed by the concrete or stone slabs underneath.”

His finale of a handstand atop a five-metre pole caused a number of jaws to drop at Clarke Quay. He got the crowd engrossed in his work by making jokes and then got them watching his balancing skills on the thin pole, which was held steady by four members of the public by tugging on ropes attached to it. Learning the move was no mean feat, Pancho said: “I used to train eight hours a day for more than four years and now I train four hours a day minimum. It takes a lot of work and it’s not easy to learn, it takes a lot of dedication.”

He started to do circus acts at the age of 17 after he was convinced that physical performing arts were the best methods to pursue his passion for exercise. “I started doing circus for fun,” he said. “Then it became a challenge. I wanted to control my body. So, I began to train seriously.”

After learning from teachers in Mexico, he trained with professional gymnastics in Cuba for a year. Then he enrolled at the Beijing International Art School for two years to perfect his art. Now he travels all over the world showing off his technique and style. “The learning process never finishes,” he said. “You are always learning how to control the mind and body better. If I am able to control everything, I would be god.”

Pancho’s most memorable performance, according to the man himself, came at the 150th anniversary of Canada celebration at the country’s parliament building in Ottawa last year. “Prime Minister Justin Trudeau was the emcee and I performed along with the Cirque du Soleil,” he said. “I love performing in Canada because the audiences are so appreciative of what I do.”

He also found the crowds in Singapore supportive. Pancho used the smattering of Chinese he knows to good effect at Clarke Quay to engage the local spectators. “I can speak some Chinese,” he said. “The Singapore scene is quite new to me as I am performing here for the first time. But the people have a sense of humour. They laughed at my jokes. I am different because my character is a bit funny.”