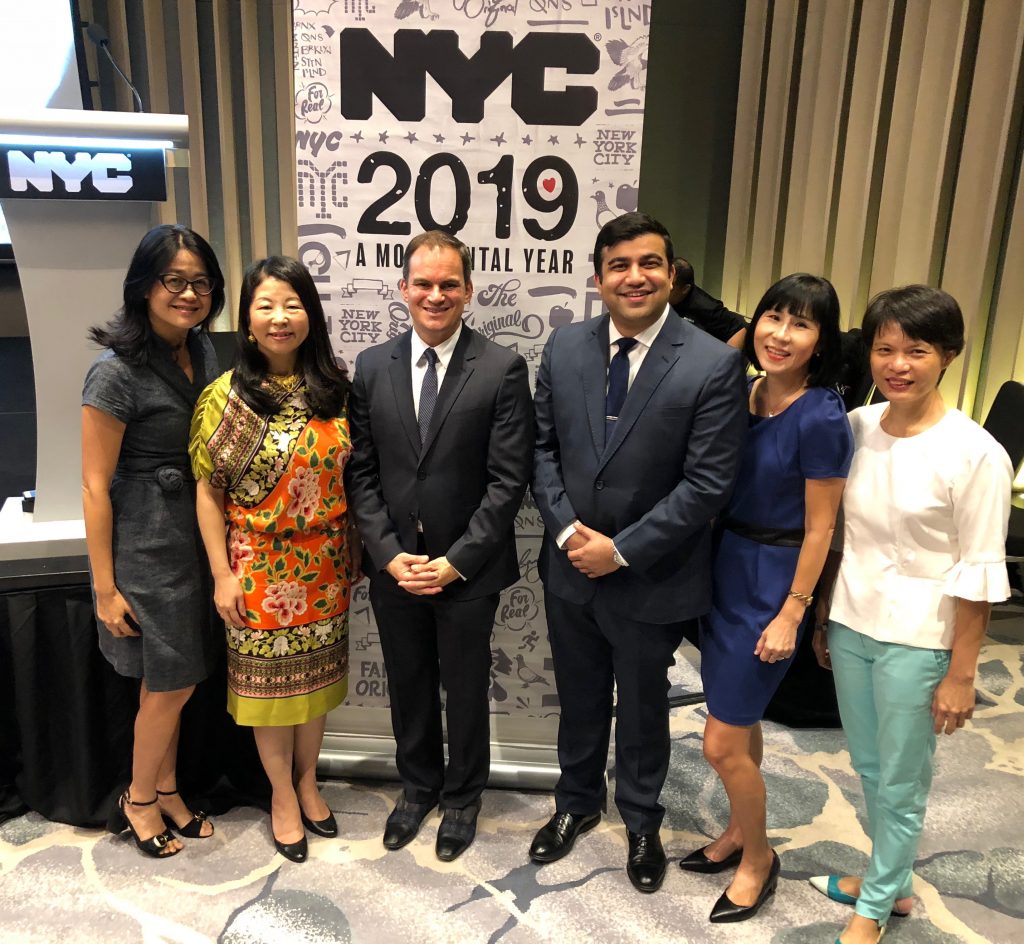 The opening comes on the heels of Singapore Airlines’ launch last week of the longest non-stop flight in the world between the New York region (Newark Liberty International Airport) and Singapore (Singapore Changi Airport). On October 19, NYC & Company President and CEO Fred Dixon will formally launch the new office with the trade and media during an event at db Bistro & Oyster Bar at the Marina Bay Sands.

“The Southeast Asia region is an important emerging target segment for New York City, representing more than 225,000 visitors each year—through the expansion of our promotional efforts in this region, we look forward to inviting even more travelers to discover the unique beauty and magnetism of the five boroughs,” said Dixon.

“2019 will be a monumental year for New York City tourism and we want to invite visitors in the Southeast Asia region to book their travel now to enjoy an extraordinary year defined by new developments and openings as well as iconic big events and cultural activity,” said Heywood.

Some of the major new large-scale developments opening in New York City next year include Hudson Yards on Manhattan’s far west side – the largest private real estate development in the history of the United States; The Shed, a multi-arts centre dedicated to global displays of visual art, design, media; and Vessel, a climbable urban landmark created by British designer Thomas Heatherwick.

Additionally, the Museum of Modern Art (MoMA) is undergoing a renovation and expansion that will increase gallery space by 30 per cent and will enhance public spaces. The first phase of renovations is now complete and the next phase will be completed in summer 2019.

In Spring, 2019, New York City anticipates the opening of the 100-store Empire Outlets, NYC’s first and only outlet destination, on the St. George waterfront in Staten Island.

In June, 2019, New York City will also welcome WorldPride, the first time the big event will be held in the United States, with three million expected over the 30-day event (the majority of events will be held June 25–30).

Additionally, in 2019, MetLife Stadium will host WWE’s WrestleMania 35 and ABB FIA Formula E Championship will be held in Brooklyn.

Other new openings this year include Domino Park, which recently debuted on the Williamsburg waterfront on June 10. On June 30, Coney Island’s New York Aquarium also welcomed the opening of the new Ocean Wonders: Sharks! exhibit.

New York City continues to have most active hotel development pipeline in the country, with 117,500 hotel rooms and an expected inventory of approximately 140,000 hotel rooms by the end of 2021. NYC currently has the highest occupancy rate (88 percent on average) and the highest average daily room rate in the nation.

The City has seen 40 consecutive months of increasing room demand, with a record 38 million+ room nights anticipated to be sold before year’s end. Recent hotel openings include The Hoxton, Williamsburg, Mr. C Seaport and the Moxy NYC Downtown. Debuting later this Fall is The Times Square EDITION.

NYC & Company representative office in the Southeast Asia region will be operated by Singapore-based Xzodus Pte Ltd., under the leadership of Director Ee Lian Lee. Trade relations will be managed by Jacqueline Lee and Press and Communications will be handled by Gemma Koh.

The route will initially be served three times a week, departing Singapore on Monday, Thursday and Saturday and the aircraft will be configured in a two-class layout, with 67 Business Class seats and 94 Premium Economy Class seats. Daily operations will commence from 18 October after an additional A350-900ULR aircraft.

For all there is to do and see in New York City, visit nycgo.com