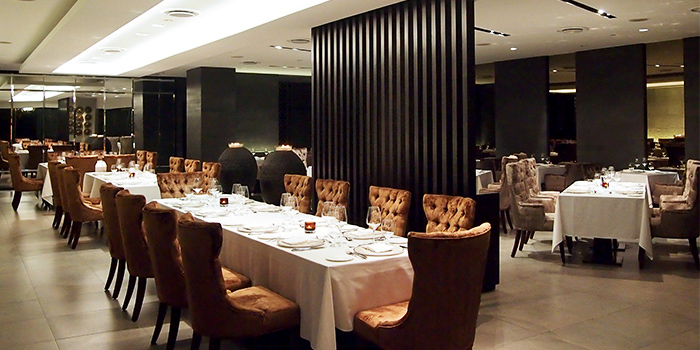 Yantra by Hemant Oberoi is a fine-dining restaurant. But it does not exude a rich ambience. The interior portrays a clam atmosphere with elegantly placed tables and chairs. The colours are earthy tones that reflect ancient India. It has been deliberately kept this way because the focus is on food.

Celebrity chef Oberoi, who retired as corporate chef of the Taj Group of Hotels in 2015 after a 41-year career, has created several award-winning Indian restaurants, including Masala Art, Masala Kraft, Masala Bay and Masala Klub. His restaurant Varq made it to San Pellegrino’s list of best restaurants in the world.

Yantra, located at Tanglin Mall, offers a balanced mix of classic and contemporary dishes, some of which can be found in his cookbook The Masala Art: Indian Haute Cuisine (2011). The 62-year-old uses ingredients that are not seen in most Indian restaurants in Singapore: such as quinoa, duck, truffle and asparagus. He adds authenticity by flying in fresh, hand-picked spices from India. The restaurant serves not just North Indian dishes. They come loaded with India’s rich cultural aesthetics.

Yantra has been in operation for nine years, but it has certainly undergone a transformation for the better since Oberoi took charge in March 2016. His creativity is clear in the fusion dishes such as Quinoa Chaat, Varqui Crab and Thepla Tacos ($16-$19). In Dhuan Gosht ($41), lamb cubes are dry roasted in a pan with freshly pounded spices and cooked overnight over slow charcoal fire and smoked with cloves. The charcoal envelopes the lamb with smokiness which adds to the flavour of the dish.

You can start off by trying out the innovative alcoholic and non-alcoholic drinks. Go for Tandoori Mojito ($14), a concoction made with pineapple, mint and white rum. The roasted pineapple is sharp, sweet and sour and complements well the mint in the mojito. It is a refreshing drink.

The tipples have been made with the idea of combining Indian spices with traditional cocktails. Yantra’s signature cocktails include the Yantra Gold Martini, Mango Gimlet, Bombay Martini and Berry Berry. An extensive wine list also allows excellent pairings of wine and food.

The sugar level in the gulab jamun, a popular North Indian dessert, is tuned down by the addition of the mascarpone cheese, which is used to make Italian desserts.

The food and drinks at Yantra come with a big touch of creativity and knowledge. But one has to pay high price to enjoy the fare.