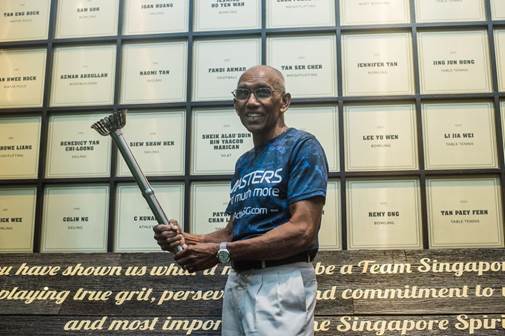 The event marks the first time in Singapore’s history that a sportsperson has been honoured with such an artefact.

Mr Kunalan has a distinguished sports career having won 15 Southeast Asian Peninsular (SEAP) Games medals and five from the Asian Games. Twice awarded the Sportsman of the Year in 1968 and 1969, his 100 metres time of 10.38 seconds at the Mexico Olympics is a record that has lasted for 33 years.

Mr Kunalan said of the process behind the artefact: “This experience has been fun and I feel very humbled by it all. I am just glad that I can share my story through the exhibit display. I wish I could do more for the community because this is the community that has given me so many, many opportunities in life.”

Before the unveiling, a hand and foot casting was conducted by local artist Baet Yeok Kuan on October 11  which was witnessed by the local track and field fraternity. During the process, Mr Kunalan enchanted the younger generation with stories from his history, such as how he soldiered on to light the flames at the 1973 SEAP Games despite burning his hand during the run up to the cauldron.

Mr Oon Jin Teik, Chief Executive Officer, Singapore Sports Hub, said: “Mr Kunalan is an inspiration not just for athletics, but also for the whole of Singapore’s sports community. It is important that we remember his story here at the Singapore Sports Museum so that others can learn from it and be motivated by it.  Achievements aside, his dedication to volunteering at the museum and imparting his wisdom to others is extraordinary. This makes him an excellent role model for all.”

Mr Lim Teck Yin, Chief Executive Officer, Sport Singapore, said: “Giving back to sport is something that runs in Mr Kunalan’s veins. His dedication to sport is exemplary and till this day he continues to contribute through the ActiveSG Athletics Club.  His achievements make him one of Singapore’s greatest athletes and his humility is something all of us can learn from. We hope that through this honour, his contribution to sport and his story will continue to inspire our athletes and generations to come.”

A senior manager at Sport Singapore, Mr Kunalan was formerly an educator for almost 50 years before retirement in 2010. His contribution to education was recognised with the receipt of the Meritorious Service Medal, part of the National Day Awards in 2015.

Mr C Kunalan is regarded as one of Singapore’s greatest athletes and mentor to sport. His contribution to athletics extends beyond medals and national records. Till this day, he continues to give back to sport as an administrator and is an inspiration to all athletes.

He started his career as a sprinter at the age of 20 when he was a student teacher and was invited by the then National Coach Tan Eng Yoon to go for training at the Farrer Park Athletics Centre.

Despite starting the sport at a late age, Kunalan would go on to win multiple medals at the Asian Games and South East Asian Peninsular (SEAP) Games and SEA Games in the 100m, 200m sprint and relays; and in 1968, he set the Singapore national record of 10.38 seconds in the 100m sprint at the Mexico City Summer Olympic Games. The record would stay unbroken for 33 years.

After retiring from competition in 1970, Mr Kunalan made a comeback in 1973 when he had the honour of lighting the 1973 SEAP Games cauldron at the National Stadium where Singapore hosted the Games for the first time. He would also compete in the 4 x 400m relay event where Singapore won the silver medal.

After retiring from competitive running in 1978, he continued to serve the sport as the National Sprints Coach from 1993 to 1996. Under his guidance, the national team broke the 4 x 100m relay record in 1994. A record that Kunalan had helped set back in 1974.

Beyond sport, Kunalan served as a teacher in Tiong Bahru Primary School and Dunearn Secondary Technical  School for 20 years before joining the National Institute of Education in 1980 as a lecturer There, he contributed significantly to the training of physical education teachers.

In the National Day Honours, Mr Kunalan was conferred the Efficiency Medal 1976 and then the Meritorious Service Medal in 2015, showing the span of his contribution to the nation.

He continues to keep his association with athletics strong and is now with ActiveSG Athletics Club to inspire the next generation of athletes.