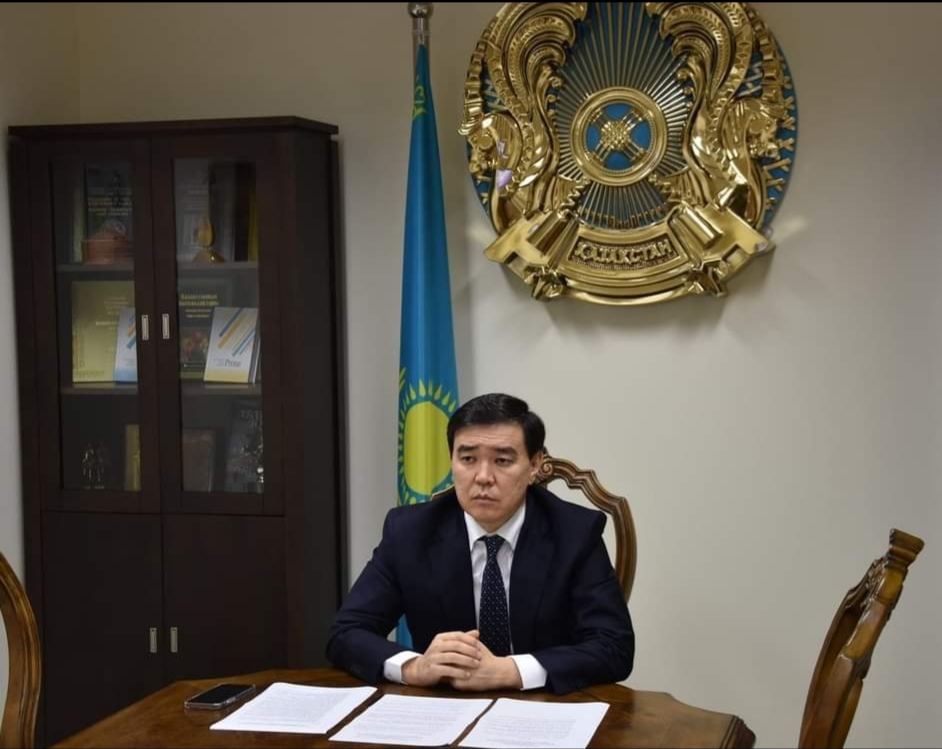 August 29, 2021, marked 30 years since Kazakhstan closed its Semipalatinsk test site, a vast, remote area that was used by the Soviet Union for hundreds of atmospheric and underground nuclear tests over a period of 40 years.

On August 29, 1991, Kazakhstan’s first President Nursultan Nazarbaev decided to close the test site, also known as The Polygon, which over the following years became the focus of close cooperation between the United States, Russia and Kazakhstan to secure nuclear material and address smuggling risks.

The effort involved the transfer of hundreds of nuclear weapons to Russia, the shutdown of plutonium production facilities, the removal of hundreds of kilograms of highly enriched uranium and the reemployment of scientists.

To do the job, the United States provided funds and project management, Moscow provided scientists and historical information and the Kazakh authorities provided access and project details.

Thanks to the extraordinary cooperation between the three countries, the threat of nuclear weapons falling into the hands of dictators, terrorists and blackmailers was eradicated. But the fallout from the nuclear tests still linger: More than a million people suffer physical or neurological defects from the radioactive dust that fell into neighbouring villages, risk of nuclear proliferation has not been totally curtailed and the impact on the environment is still devastating.

Nuclear weapons are volatile and the world can do without it. The United Nations General Assembly on December 2, 2009, unanimously declared August 29 as the International Day Against Nuclear Tests. The crux of the resolution was that “every effort should be made to end nuclear tests in order to avert devastating and harmful effects on the lives and health of people” and that “the end of nuclear tests is one of the key means of achieving the goal of a nuclear-weapon-free world.”

The initiator was Kazakhstan, which selected August 29 as the date of observance to align with the closing of the Semipalatinsk Nuclear Test site. It has since led the initiative to make the world nuclear weapons free and make it a safe place for humans.

On August 19, 2021,  the Kazakhstan embassy in Singapore organised a roundtable on the occasion of the 30th anniversary of the closure of the Semipalatinsk Nuclear Test Site. The particpants included diplomats and experts from Singapore and Kazakhstan.

Kazakhstan’s Ambassador to Singapore Arken Arystanov (above) started the session by intoducing the topic and the speakers. He spoke about Kazakhstan’s contribution to nuclear disarmament, non-proliferation and peaceful use of nuclear energy.

He also highlighted Kazakhstann’s global and nuclear initiatives and its political position based on the firm belief that general and complete nuclear disarmament and the abolition of nuclear tests are the foundation of global security.

“Kazakhstan, Singapore and Costa Rica have much in common,” he said. “Our countries have strong anti-nuclear sentiments. Nuclear disarmament and non-proliferation remain a vitally important part of our foreign policies.”

Mr Iftekhar Ahmed Chowdhury, Honorary Fellow of the Institute of South Asian Studies (ISAS) at the National University of Singapore and a former Foreign Minister of Bangladesh,  expressed his full support for the idea of creating a Global Alliance of Leaders for Nuclear Security and a Nuclear-Weapon-Free World (GAL), which was voiced by Mr Nazarbayev during the fifth meeting of the Astana Club in November 2019.

“Kazakhstan has been a party to all the major arms control initiatives,” he said. “It was instrumental in the creation of a nuclear free zone in Central Asia. The country’s capital has hosted some very significant conferences, such as the one on the Global Initiative to Combat Nuclear Terrorism in 2010 and the International Conference on building a world without nuclear weapons in 2016.

“Kazakhstan’s current President Kassym-Jomart Tokayev has constantly underscored the serious challenges the world is facing in the areas of nuclear non-proliferation and disarmament. Unfortunately, the same perceptions are not global. Ours is a world that is bristling with deadly weapons and currently confrontation, rather than conciliation, is what we see all around. Therefore, this is the time where reason and restraint must prevail. Kazakhstan has been at the forefront of maintaining peace in the international scene and surely this merits high praise. All countries should act now than later.”

In November 2019, at the 5th meeting of the Astana Vlub, Mr Nazarbayev announced a new international initiative – the creation of the Global Alliance of Leaders for Nuclear Security and the Nuclear Weapon Free World (GAL).

Many authoritative and responsible world leaders supported the idea of the First President to create a global-scale association capable of making a real contribution to strengthening the international security system.

On November 19, 2020, as part of the process of creating GAL by the Nursultan Nazarbayev Foundation and the Institute of World Economy and Politics (IMEP), an online conference of the Astana Club Advisory Council was organised, dedicated to the problems of the international security system and the resumption of the global nuclear dialogue.

The international conference was attended by authoritative politicians, heads of international organisations in the nuclear field, well-known experts and leaders of the global anti-nuclear movement.

Within the framework of the conference, Mr Nazarbayev addressed the participants with a Video Message.

He said: “When I was the president of Kazakhstan, I devoted a considerable part of my work in foreign policy to the idea of achieving a world free of nuclear weapons.”

Further, he noted the contribution of Kazakhstan in this direction, stating that “having gained independence, Kazakhstan voluntarily renounced the possession of the world’s fourth-largest arsenal of nuclear weapons”.

According to the First President, “history has proven that it was the right decision. Through our bold example, we have shown others that progress and prosperity can be achieved peacefully.”

In conclusion, addressing the conference participants, Mr Nazarbayev said: “You are well-known politicians and distinguished experts who, like me, unreservedly support the idea of striving for a world without weapons of mass destruction. It is clear that this path will not be easy and there are many serious obstacles on the way. Theodore Roosevelt once said: ‘Believe you can and you’re halfway there’.

“I am grateful to all of you for supporting my initiative to create a Global Alliance of Leaders for Nuclear Security and a Nuclear-Weapon-Free World. The Open Call on establishing the Alliance and adopting its goals, that we are launching today, is the first practical step in this direction.”

At the end of the meeting, members of the Astana Club Consultative Council adopted an Appeal to the world leaders with an appeal to support the initiative to create a GAL. The goal of the Alliance is to become an influential global platform able to unite world leaders and activists into a wide coalition promoting the creation of a secure future of humanity free of the threat of nuclear war.

Ambassador Bolat Nurgaliyev (below), Chairman of the Board of the Institute for Foreign Policy Studies under Kazakhstan’s Ministry of Foreign Affairs, spoke about the role of the First President of Kazakhstan and his contribution to the struggle for nuclear security and a world free of nuclear weapons. He highlighted the strategic vision of Mr Nazarbayev, who voluntarily renounced nuclear weapons. 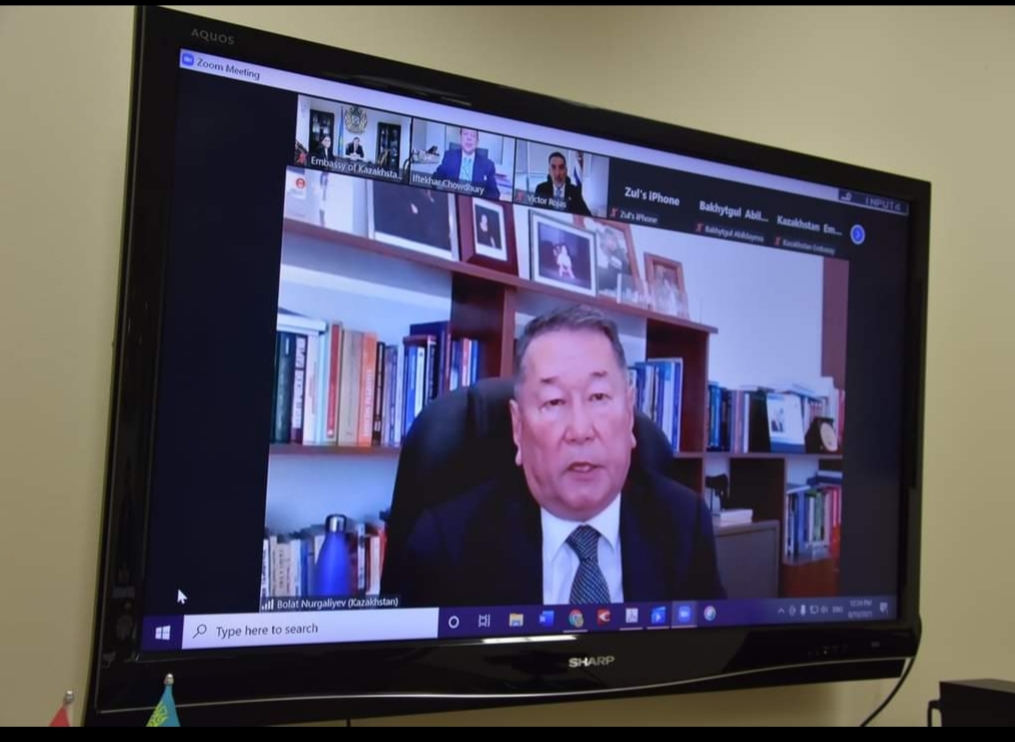 The Kazakh diplomat also noted the commitment of Mr Tokayev to the policy of the First President in the field of nuclear disarmament, which was reflected in the Concept of the Foreign Policy for Kazakhstan for 2020 to 2030.

“The 1968 nuclear Non-Proliferation treaty was a landmark international treaty. But 53 years on, the goal of getting rid of nuclear weapons is as distant as it can be,” said Mr Nurgaliyev. “We should break this vicious circle and press to honour the commitments of 1968 to keep nuclear weapons under strict international control. If foreign policy experts unite in solidarity and consistently keep raising this particular issue with decision makers, public opinion activists, the media and NGOs of different countries, further pressure can be put on the nuclear powers to do what is undoubtedly what is vital for the interests of the entire global community.

“The only path to reach a safe environment is by getting rid of weapons of mass destruction – nuclear, biological and chemical. There is a lack of solidarity and trust in today’s international relations. Kazakhstan’s call is for the international community to think in terms of joining efforts, instead of trying to blackmail others with their nuclear capacity. As our First President said, all should join Kazakhstan in the universal movement to eliminate nuclear weapons. That’s the only path. It is feasible iff we have a proper level of trust and solidarity among all states.” 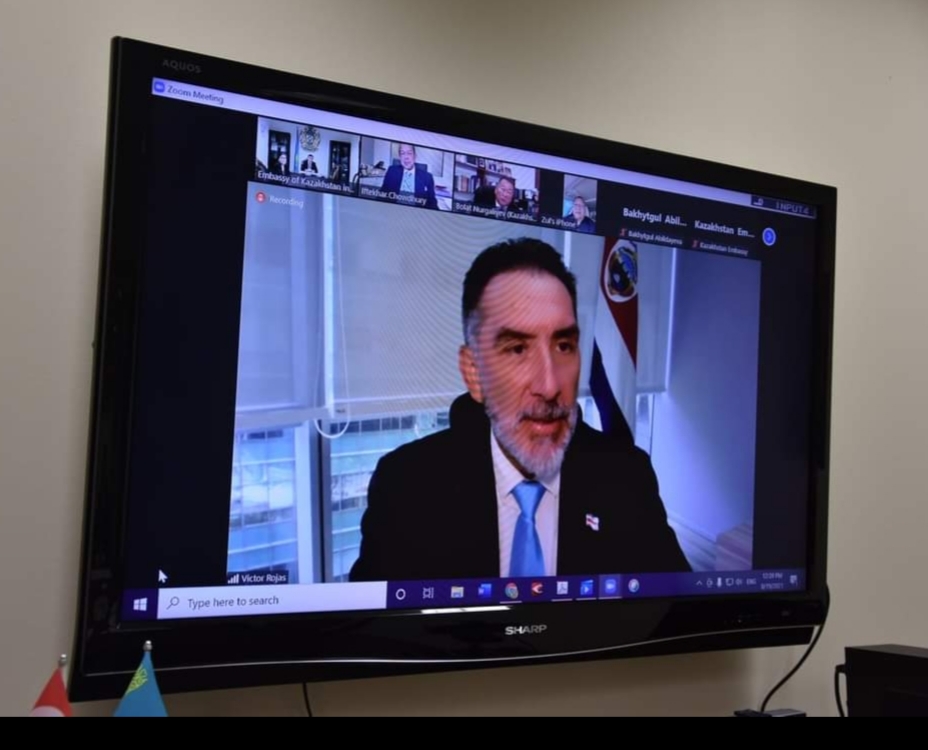 Mr Victor Hugo Rojas Gonzalez (above), Costa Rica’s Ambassador to Singapore, noted that the Central American country and Kazakhstan have a significant track record in the field of combating nuclear weapons and non-proliferation and these areas remain a vital part of the foreign policy of both countries.

Mr Zulkifli Baharudin, Singapore’s non-resident Ambassador to Kazakhstan, noted that the closure of the Semipalatinsk nuclear test site is an important milestone in the history of independent Kazakhstan. He confirmed the  commitment of the two countries to implement practical measures to strengthen the nuclear non-proliferation regime and improve nuclear safety.

In conclusion, the participants of the roundtable agreed that effective steps in the field of non-proliferation require regional and global cooperation and expressedsupport for Kazakhstan’s efforts to solve problems of international security, nuclear disarmament and non-proliferation.

“I fully support the idea that all countries must have solidarity in solving such a very important issue that concerns the whole world,” said Mr Arystanov. “We should continue our efforts to achieve a nuclear free world for our future generations and for ourselves. We hear from the news that a small nuclear war is possible in the world, but I think it’s not the solution for any problem.”