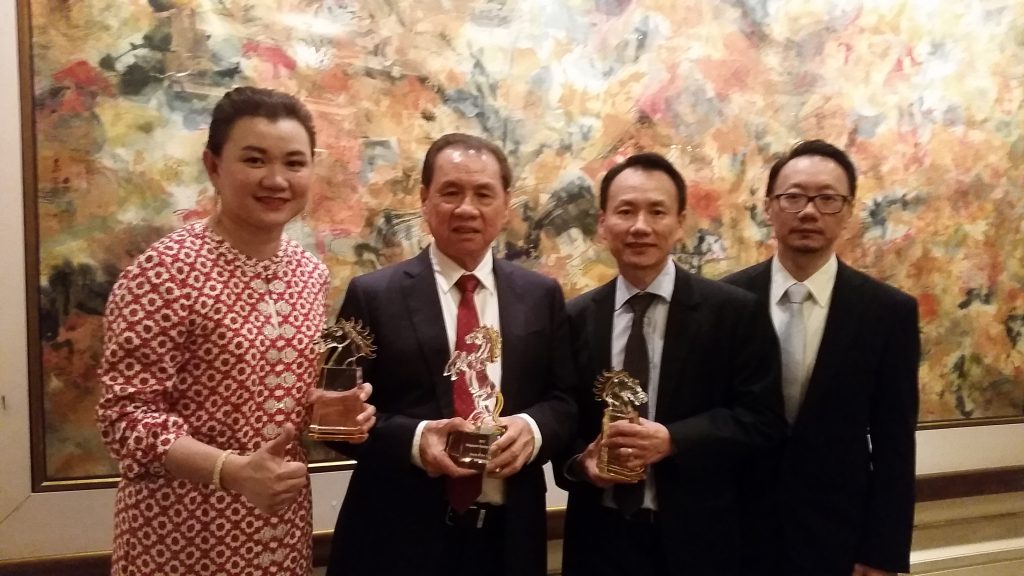 The question of who between Gilt Complex and Infantry would be declared Singapore’s Horse of 2017 was settled on Monday (January 8).

At a glittering Singapore Racing Awards night, hosted by the Association of Racehorse Trainers of Singapore, at the John Jacob Ballroom, St Regis Hotel, Infantry pipped Gilt Complex at the post to be crowned 2017 Singapore Horse of the Year.

Both horses had produced classy performances at the top level last year. But probably what helped Infantry clinch the title was the five-year-old’s blistering run to snare the $1.15 million Emirates Singapore Derby. The New Zealand-bred gelding also had victories in the $200,000 JBBA Moonbeam Vase, $350,000 Merlion Trophy and $700,000 Kranji Mile.

Gilt Complex, a late contender for the Horse of the Year award, was a two-legged winner of the Singapore Triple Crown Series, clinching the $500,000 Raffles Cup in October and the $1.35 million Dester Singapore Gold Cup in November. The Cliff Brown-trained and Graham Mackie-owned gelding was already named the Most Improved Horse of the Year and Champion Stayer.

The voting panel, consisting of the Singapore Turf Club’s (STC) handicapping panel, the media and STC’s TV broadcasting teams, also awarded the Champions Four-Year-Old and Champion Miler titles to Infantry, who is owned by the Kajorn Petch Racing No. 2 Stable.

Thai owner Benjaporn Chaisirinon (photo, extreme left) told insiderecent.com: “We are very happy with Infantry’s performance. He is an amazing horse to us.  We hope he will win more cups for us in 2018.”

The other big winners on Monday night were Lim’s Stable, which was declared the Leading Owner By Stakes Won ($2,005,561) and Leading Owner By Number Of Wins (33); Max Walker, who took the Champion Trainer award with 87 wins from 763 starts; Vlad Duric, who grabbed his maiden Champion Jockey title with 83 wins from 471 starts; and Wong Chin Chuen, who became the Champion Apprentice Jockey for the second year in a row. The Malaysian recorded 30 wins from 468 starts.