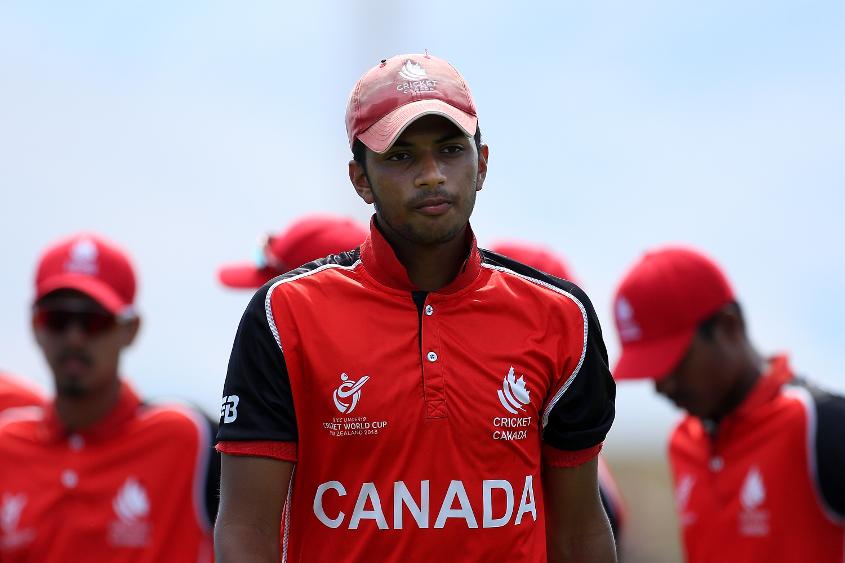 All-rounder Akash Gill slammed the first century by a Canada batsman in an ICC U-19 Cricket World Cup match as the North American side defeated PNG by 80 runs, while Wessely Madevere took two for 11 and then scored 47 as Zimbabwe beat Namibia by seven wickets.

The Super League, featuring the top two sides from each preliminary group, commences on Tuesday (January 23) with the Australia-England quarter-final in Queenstown.

Gill became the 13th player to notch a century in the 12th edition of the tournament and his performance was the highlight from the two matches in Christchurch.

Gill cracked 12 fours and two sixes as Canada notched up a competitive 265 for eight after being asked to bat first. Captain Arslan Khan and Ashtan Deosammy scored 35 apiece for Canada while fast bowler Faisal Jamkhandi and left-arm spinner Aran Pathmanathan grabbed three wickets each as PNG were bowled out for 185 in 44.3 overs. Simon Atai (81) fought a lone battle for the losing team.

Gill, who was later named man of the match, said: “I didn’t really know about that record (first Canada batsman to score a century in the U-19 CWC), but it’s honestly a great feeling. When I got to that milestone, I was just overwhelmed. It still feels surreal to me, I’m just letting it sink in.”

In the other match, Madevere’s all-round effort of 47 and two for 11 helped Zimbabwe defeat Namibia by seven wickets. Set a target of 114, Zimbabwe got home in only 19.3 overs.

The Super League, featuring the top two sides from each preliminary group, commences on Tuesday with the Australia-England quarter-final in Queenstown.

Australia and England exuded confidence as they trained ahead of their match. Three-time champions Australia found rhythm in the tournament after losing their opening match to India by 100 runs while England advanced winning all their three league matches.

Australia captain Jason Sangha said: “tWe’ve been focusing on ourselves and the way we want to play our cricket. The more we can control our plans the better cricket we will play tomorrow. We have some really good performances and the team is gelling really well together.

“We are 15 guys who can all do a fantastic role and have got full confidence that anyone who comes in the squad, he is going to give 100 per cent.

England captain Harry Book said: “The way we have been playing is outstanding. Our bowlers have been taking wickets at the top, our batsmen have been scoring runs. As long as we do the basics, simple things well, there is no reason why we can’t beat them.

“As long as we are bowling straight, making them play every ball, getting wickets consistently, there is no reason why we can’t bowl them out for 100-150, and not get off say two or three down again! Our overall balance is outstanding.”

The other Super League quarter-final will be played between Pakistan and South Africa (January 24), Afghanistan and New Zealand (January 25) and India and Bangladesh (January 26).