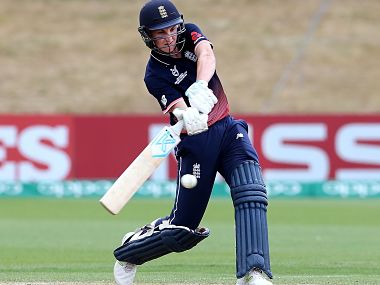 Liam Banks and Will Jacks slammed fine centuries as England completed a massive 282 runs victory over Canada in a Group C match on Saturday (January 20), a result that ensured Bangladesh also qualified for the Super League at the ICC U-19 Cricket World Cup.

England completed the league with three wins to top the group while Bangladesh qualified as the second team after their wins over Canada and Namibia, who will figure in the Plate championship which gets underway on Monday (January 22).

In other matches on Saturday, New Zealand defeated South Africa by 71 runs to top Group A, in which the Windies won their first match as they drubbed Kenya by 222 runs, while Ireland pulled off a thrilling four-run victory to deny Afghanistan a top-place finish in group D.

England, champions in 1998, were virtually assured of topping the group before this match owing to their high net run-rate but did not show any complacency against Canada, notching a huge 383 for seven after being invited to bat first.

Canada, who needed to get to the target in 37.5 overs if they were to edge out Bangladesh for a place in the Super League, barely touched the three-figure mark as left-arm spinner Prem Sisodiya grabbed three for 23 while Adam Finch, Luke Hollman and Roman Walker all finished with two wickets each. Wicketkeeper-batsman Pranav Sharma top-scored for Canada with 24.

England play Australia in the Super League quarter-finals while Bangladesh take on India.

Liam Banks, who was later declared player of the match, said: “I was a bit nervous but also looking forward to it (the match). We got a good understanding between us (with Jacks), we were talking through, trying to get the best out of it. We (as a team) are in a good place, we could pick anyone from the 15 and challenge anyone in the tournament.”

New Zealand elected to bat in a match being played in front of broadcast cameras in Tauranga. Openers Rachin Ravindra (76) and Jakob Bhula (44) produced another century partnership after having put on a mammoth 245-run stand against Kenya in their last game, as the hosts posted a total of 279 for eight. Dale Philips (43) and Max Chu (35) also chipped in with useful efforts.

South Africa lost some early wickets but a 106-run stand for the fifth wicket between Hermann Rolfes (108) and Jean du Plessis (54) raised hopes. However, the 2014 champions lost their last six wickets for 26 runs in the face of a high asking rate. Ravindra grabbed four for 32 with his left-arm spin to bag the player of the match award.

Afghanistan put Ireland in to bat and restricted them to 225 for eight in their Group D match. Medium-fast bowler Wafadar Momand grabbed three for 50 and left-arm spinner Qais Ahmed took three for 32 even as left-hander Graham Kennedy (37 not out), captain Harry Tector (36), Neil Rock (35) and opener Jamie Grassi (32) were the main scorers for Ireland.

However, Afghanistan’s batting failed to chase the total as Tector came back to take three wickets with his off-spin bowling and Joshua Little took two wickets. Afghanistan lost wickets at regular intervals and the fall of Mujeeb Zadran and Qais Ahmad towards the end sealed the match for Ireland.

Afghanistan, who had defeated Pakistan by five wickets on the opening day in what was the crunch match of the group thus finished in second place owing to Pakistan’s higher net run rate.

Defending champions Windies registered a 222 runs victory over Kenya to secure third position in Group A, scoring a huge 318 for seven after electing to bat. Alick Athanaze struck a fine 116 (93b, 15×4, 1×6) and Kimani Melins came up with a 45-ball 60.

The Windies, who went out of contention for the Super League after losses to New Zealand and South Africa, then bowled out the Africa qualifier for a mere 96 runs with Bhaskar Yadram grabbing five for 18 and Jeavor Royal finishing with four for 25.

*The draw for the Super League semi-finals has been amended by the event technical committee to ensure that teams who were in the same group do not run into each other in the semi-finals.