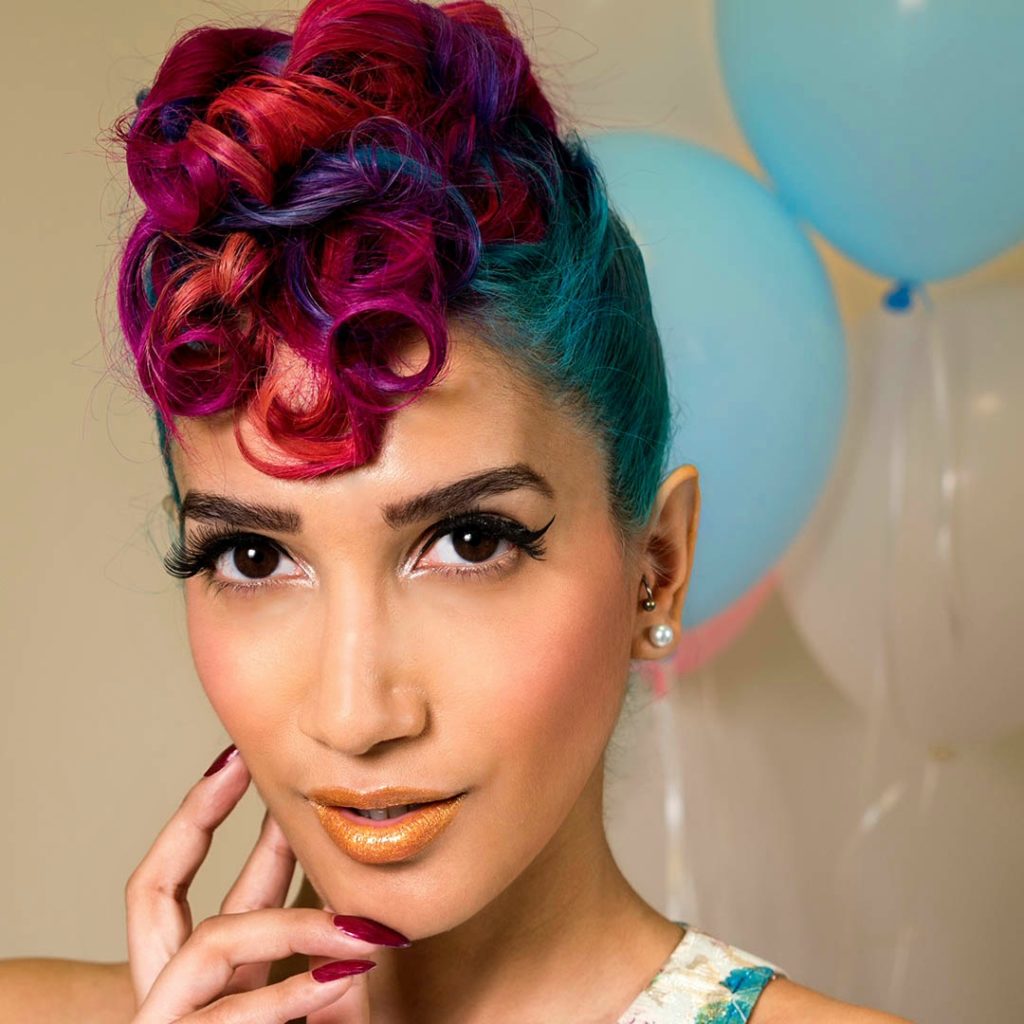 Sukki Singapora is a “what you see, what you get” kind of person. Being in burlesque, she is probably viewed as the ultimate femme fatale, but she says she’s “too uncool and geeky” for that.

“I genuinely have no filter on what I put out there, because I just believe in being myself,” she said during a visit to Singapore in the first week of December.  “I’m also the kind of person who gets extremely passionate about things I love. I tend to go ‘all or nothing’.”

She makes it clear that she absolutely loves her art. “I feel constantly excited about everything I’m doing, and what the future holds, because I get to wake up and truly express myself in a way I’ve always wanted to, through burlesque,” she said.

On stage, she admits to being a supremely confident person. But, off it, she’s “still quite shy and dorky”. That is probably because she is still a bit of a nerd.

Her extremely traditional family background may have something to do with it. Her father is Indian Singaporean and mother British. Both are very conservative.

“Growing up as a mixed-race Singaporean, people always assume that perhaps it was less stringent because of my Western side, but that simply wasn’t the case,” said the 28-year-old, who was named Sukki Menon at birth. “Both my parents are doctors, and yes, the cultural stereotypes do exist. I was definitely pushed more towards sciences and away from the arts.”

She explains that her close-knit family always had that essence of little India, despite being in Singapore. It was common to hear Malayalam spoken at home and vellayappams (pancake made with fermented rice-coconut batter) served at breakfast.

But, growing up in a mixed-race setting in the Goodman Road area, she always felt like she didn’t belong to any box. “Because of that I discovered vintage fashion as a way to express myself irrespective of race or gender,” she said. “It was simply about the pin-up look.”

The two tend to go hand in hand in burlesque, and she simply knew that she had to try it. “Coming from an extremely traditional family, everything about it appealed to me,” she said. “It was an art which allowed me to finally express myself completely and reclaim my body. It truly felt empowering.”

Burlesque was an art form frowned upon in Singapore until Sukki fought for its acceptance. She became the first Singaporean artist to perform a burlesque act in the country and founded The Singapore Burlesque Society in 2012.

“For me, it wasn’t about whether or not burlesque was accepted,” she said. “It was about the basic right that we should have as women to express our sexuality and sensuality without restriction or judgement. It was about freedom of expression, it was about going up against antiquated patriarchy and about fighting for change as a feminist.

“It was such a difficult time, especially with my family, but I’ll always remember the messages and letters I received from fans saying I was inspiring them. It was then that it became bigger than me. It would have been easier to give up, but I had become an inadvertent role model for all these women, and men, who were looking up to me to succeed. So, I knew I couldn’t give up.

“I never expected to win the fight in so few years. It was personal to me because it was home. If you cannot be free at home, then you’re not truly free. Being able to perform internationally just wasn’t the same. I wanted to pave a way for all of us to have the freedom to express ourselves.”

In 2013 she quit her day job in IT to become a full-time burlesque artist and has not looked back since. Currently she spends her time equally between Singapore, Los Angeles and London.

In early December she was back in Singapore for several shows, the launch of her first lipstick line and to see her family.

Preparation is a huge part of the art of burlesque. Sukki, who is best known for being the first international burlesque performer from Singapore, rehearses and goes through choreography weekly or daily with her backing dancers if it’s just before a show. She also trains in the gym most days to build stamina for the performances.

Her burlesque performances are noted for being lavish with elaborate costumes and a Bollywood-influenced style. Her emphasis is on sensuality and fusing Western and Eastern styles with a particular nod to classic Hollywood glamour and inspiration from Barbara Yung, a 1950s American-Chinese performer.

Her signature act used to be a performance inside a giant diamond ring, where the diamond was filled with champagne. But this year she decided to “really let loose and go crazy”, and, for her arrival in Los Angeles, designed a giant unicorn which blows bubbles out of its mouth. It is attached to a huge lit-up rainbow from which she swings from.

“I tend to keep things subtle that way,” she said. “I’d definitely say that my style is a fresh look on burlesque. I think that the traditional aesthetics have been overdone, and it’s time for a crazy change. However, despite that, with each costume I’ll always make sure that I’ve woven in some element of my cultural heritage. Be it a sari or crystals in a henna design or one act which was inspired by the Merlion. I think it’s so important to never forget where you came from, and to really put Singapore on the map when it comes to art and artists internationally.”

She believes the giant unicorn act is the most satisfying and outstanding act that she has done. “When I sat down and told everyone what I was planning to do, they all thought I was completely nuts, but now here it is. Slap bang in the middle of Hollywood! I still can’t believe I own a giant unicorn and that it’s my actual job to perform on it. From where I started, pushing for change, to this, I get really emotional every time I do that act. To everyone else it might be an awesome giant unicorn, but to me it’s the manifestation of my freedom as an artist.”

The great thing about burlesque is that it is okay to get things wrong. It never takes itself too seriously. There are also no rules. So Sukki, who received the Asian Women of Achievement Award for her outspoken views on freedom of expression for women in socially restrictive countries, is constantly trying new concepts.

“It’s a really exciting time for me,” she said. “I hope I’ll continue to inspire people to follow their dreams, especially in Singapore, and keep doing what I’m doing. It feels amazing to be able to add another string to the bow of burlesque and to be able to create something which is totally different and which people love. Anything seems possible in the future, which is an amazing feeling.”