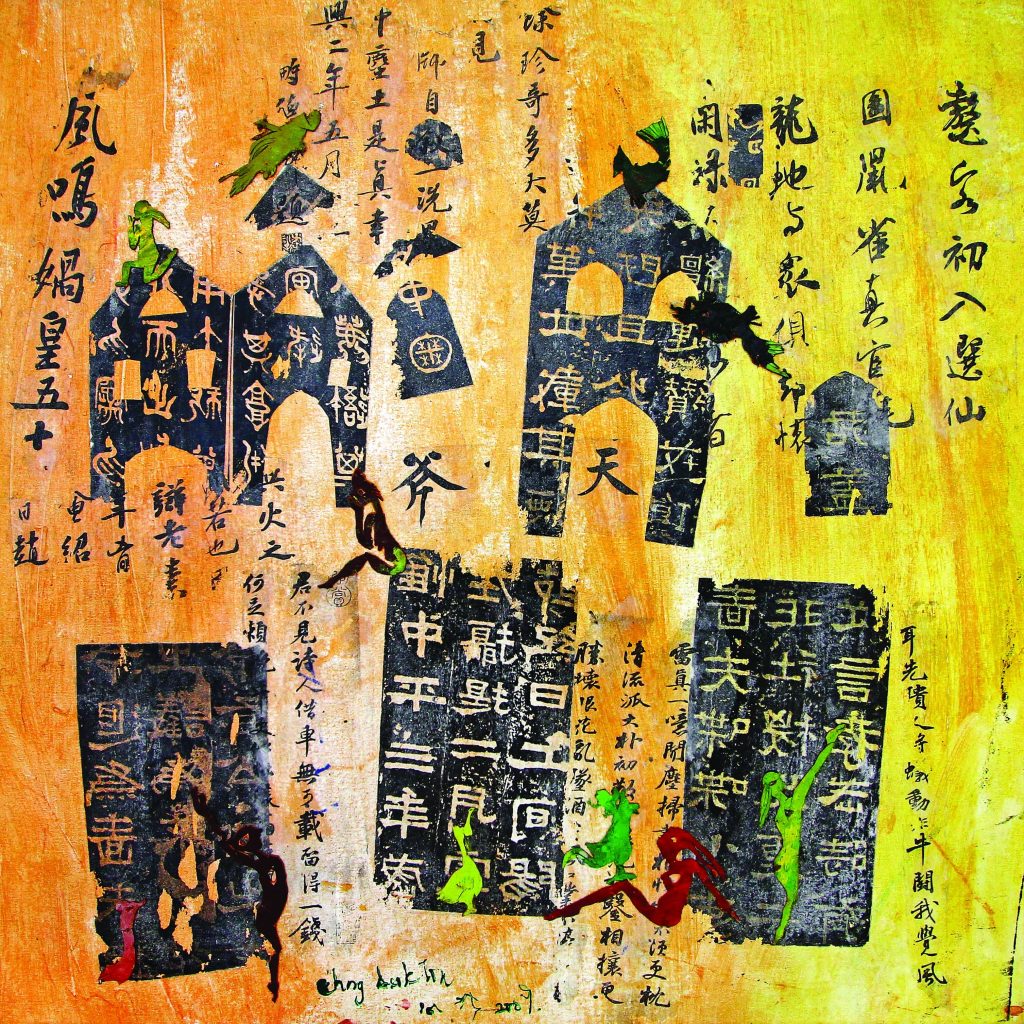 In collaboration with Pan Pacific Singapore, a series of three art exhibitions featuring artworks by Very Special Arts Singapore’s (VSA) artists with disabilities will be showcased at the hotel’s public art space from February to July 2018. A total of nine artists (grouped according to themes) will be participating in these exhibitions to present and sell their art pieces to the public.

The first showcase in the line-up is themed “Hail, Chinese Culture”, to celebrate the arrival of spring as well as the Chinese New Year in February. Featuring mixed-media paintings based on Chinese poems by Chng Seok Tin, as well as Chinese ink paintings by Teresa Tan Yan Lie and Lee Mun Choong, the exhibition aims to highlight the spirit and beauty of Chinese culture.

Seok Tin is a writer, art educator, lyricist and leading printmaker with two masters in fine art from the United States. A former lecturer at LASALLE-SIA College of the Arts, Seok Tin hs been an artist for a long time. In 1988, surgery to remove a brain abscess also damaged her optic nerve. Although left with a negligible 10 per cent vision in the right eye, Seok Tin persevered as a professional artist, replacing prints with layered collages and 3-D sculptures.

Seok Tin’s prints have won acclaim in more than 60 group and solo exhibitions across the US, United Kingdom, Taiwan, Hong Kong, Japan, China, Malaysia and Singapore. In 1994, she represented VSA Singapore at the VSA International Arts Festival in Brussels, Belgium, and was named a VSA Yamagata Fellow by VSA International in 1996.

Seok Tin has been featured in Mediacorp’s Extraordinary People and in Singapore Women at the Helm, a 1996 publication featuring 30 successful women. In 2001, Seok Tin was bestowed the title Woman of the Year.

A former student of the Spastics Children’s Association School, Mun Choong is an affectionate, enthusiastic, child-like artist whose squeals of joy interject every few strokes of his art-making process. His subjects often revolve around the natural world of flora, fauna and garden creatures. His work has a fresh and youthful quality that charms the viewer.

Mun Choong pursues art under the guidance of private tutors and the loving care of his parents. In 2001, he was selected to participate in a cartooning workshop organised by Very Special Arts and The Necessary Stage. Despite the switch from Oriental to Western graphic techniques, Mun Choong’s innocent and loving nature showed through his naive style and minimalist stick figures and objects. His work has been featured on greeting cards sponsored by Mobile One and the Community Chest.

Teresa has always enjoyed painting, but she never knew she had the talent for it until she was struck with her disability. She started her journey as an artist after attending art lessons conducted at the Handicaps Welfare Association. Even now, Teresa goes to art classes to upgrade her painting skills. As the saying goes, it is never too late to learn and this is exactly Teresa’s attitude towards art.

Teresa’s style of painting is called “Elaborate Art”. It requires a lot of skill and concentration as this form of art involves layers and layers of paints to achieve the final result. To Teresa, working on her art pieces gives her a very big sense of achievement; it also provides a chance for her to stay connected to the disconnected world out there.

The mission of VSA is to provide access and opportunities for persons with disabilities to the arts for enjoyment and integration into society. To achieve this, VSA promotes the educational, social, rehabilitative and therapeutic benefits of visual, performing and literary arts.