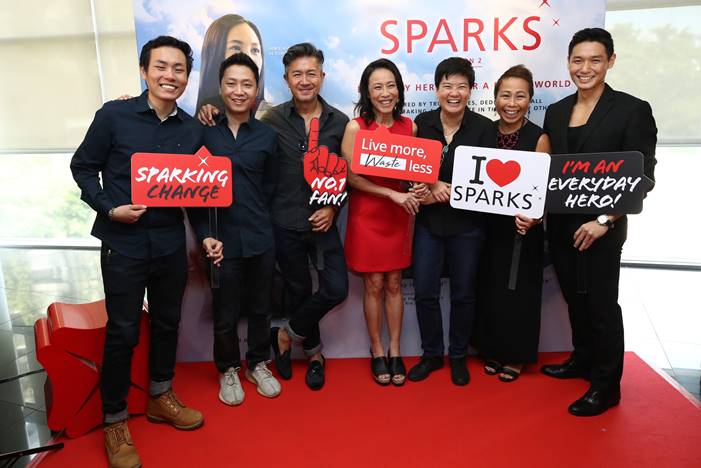 In line with its commitment to advancing the sustainability agenda as a purpose-driven bank, DBS Bank has debuted the second season of Sparks, an award-winning mini-series.

Themed “Everyday Heroes for a Better World” and inspired by true stories, the first three episodes of this new season follow a group of dynamic DBS bankers as they partner with the community to address some of the most pressing social and environmental issues of the day. These include plastic pollution, food waste as well as social inequality.

The episodes are inspired by the stories of three social enterprises (SEs), Evoware from Indonesia, Bettr Barista from Singapore and Eco-Greenergy from Hong Kong, which are supported by the DBS Foundation. The DBS Foundation was set up five years ago to champion social entrepreneurship and has since nurtured over 300 SEs around the region.

Evoware was founded to address the global plastic waste problem by providing an eco-friendly, biodegradable and even edible packaging solution made from seaweed. Bettr Barista empowers marginalised individuals through jobs training in coffee brewing so they can be self-sufficient. As food waste becomes a burgeoning issue in developed societies, Eco-Greenergy turns coffee grounds into innovative products such as compostable cutlery, therefore upcycling food waste.

Through Sparks Season Two, DBS hopes to spark conversations and galvanise change around key sustainability challenges such as:

At the same time, through the episodes, the bank seeks to pay tribute to everyday heroes whether individuals, businesses or members of Team DBS, who are passionately and resiliently stepping out to make a difference. 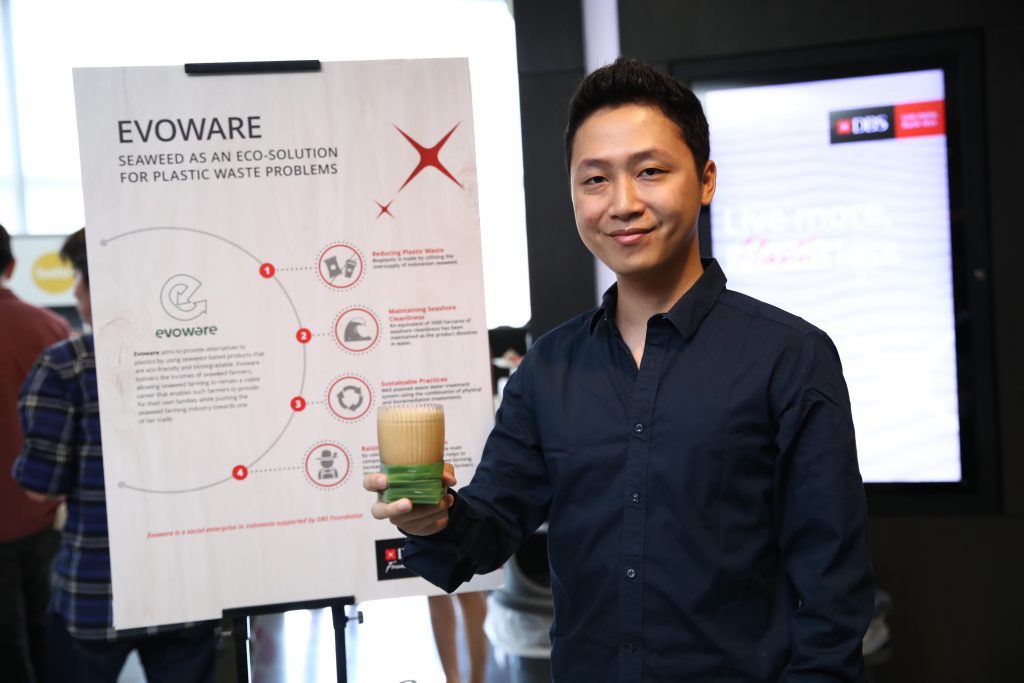 “As a purpose-driven bank that’s deeply rooted in the heart of Singapore and the region, we believe we have a central role to play in creating a sustainable future that goes beyond banking. We are acutely aware that such a huge endeavour requires us to join hands with businesses, communities and the public. Fundamentally, we also believe that there is an everyday hero in each and every one of us, and together, we can all drive change – in big and small ways – for a better world.”

Over the years, DBS has been focused on advancing the sustainability agenda, through responsible banking, responsible business practices and creating social impact. It was the first bank in Southeast Asia to be included in the Dow Jones Sustainability Index Asia-Pacific and the first Singapore bank to be named as a constituent of the FTSE4Good Global Index. DBS has also been included in the Bloomberg Gender-Equality Index for the last two years. 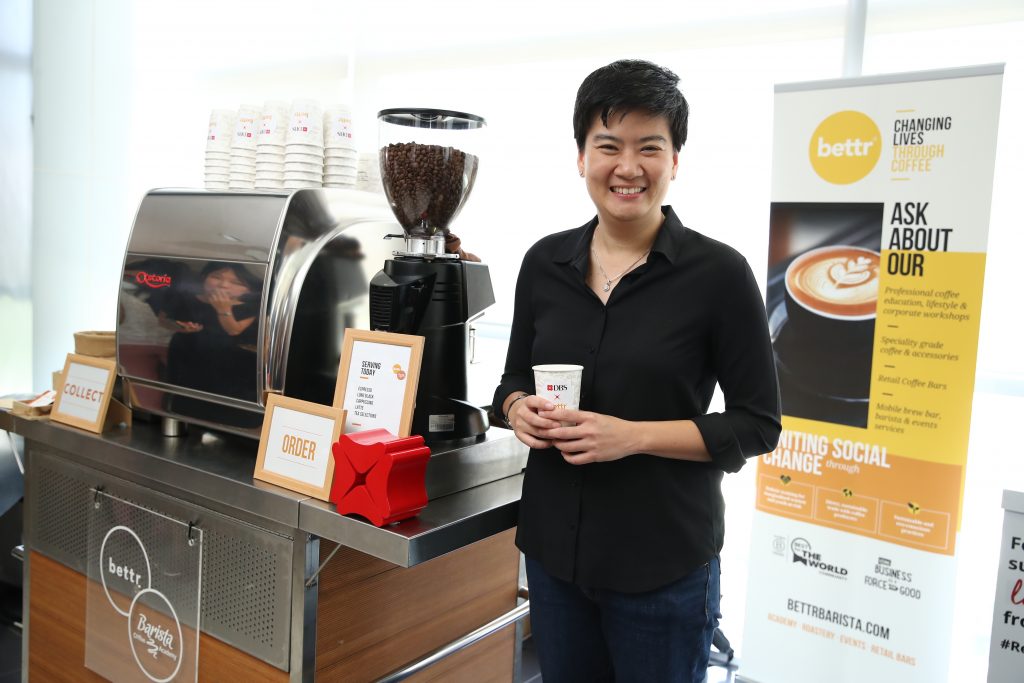 In 2018, the bank provided sustainable financing amounting to more than SGD 2.4 billion. Recently, the bank signed Singapore’s first sustainability linked loan for an SME with Chew’s Agriculture, a leading egg producer in Singapore.

DBS is moving towards utilising 100% renewable energy for its entire Singapore operations by 2030 and has partnered the Singapore Management University to launch Singapore’s first sustainability major.

On the social impact front, the DBS Foundation has awarded about S$5 million in grants to SEs across the region. These SEs have deployed social innovations in areas such as healthcare, social inclusion, environment protection, waste management, food sustainability, as well as employment and income generation for the marginalised. In 2017, DBS was also the official banking partner and sole placement agent for the Women’s Livelihood Bond, the world’s first social sustainability bond to be listed on a stock exchange. 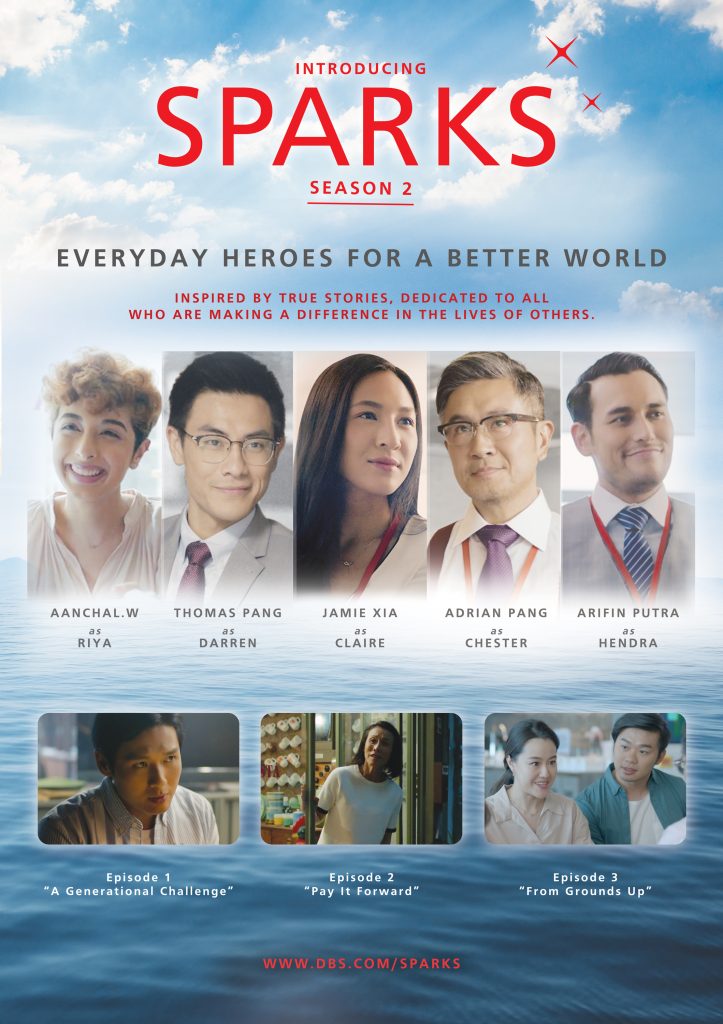 Since its 2016 debut, the 10 episodes of the first season of Sparks have garnered more than 250 million views and over 24 million digital engagements across the region. It has also won a number of global marketing accolades. These include the Gold Award in Digital Marketing at the global Efma-Accenture 2017 Distribution & Marketing Innovation Awards and Silver in the prestigious Shorty Awards 2018. Most recently, it was also named winner in the Video Marketing category, Corporate division, in the Conference Board’s Excellence in Marketing and Communications Awards 2019.

View the Sparks miniseries that has been inspired by true stories: DBS.com/sparks

Inspired by true stories, DBS’ award-winning mini-series returns for a second season. Themed “Everyday Heroes for a
Better World”, it seeks to raise awareness and galvanise action around the big sustainability issues of today – issues
such as plastic pollution, food waste and social inequality. It also celebrates everyday heroes and the passion, resilience
as well as creative invention with which they tackle these issues.

Since its 2016 debut, the 10 episodes of the first season of Sparks have garnered more than 250 million views and over
24 million digital engagements across the region. It has also won a number of global marketing accolades. These include
the Gold Award in Digital Marketing at the global Efma-Accenture 2017 Distribution & Marketing Innovation Awards and
Silver in the prestigious Shorty Awards 2018.

Most recently, it was also named winner in the Video Marketing category,
Corporate division, in the Conference Board’s Excellence in Marketing and Communications Awards 2019.

Episode 1 – A Generational Challenge
Team DBS is back! The bankers take on a new client who is on a mission to change his family plastic business. But
with family tensions threatening to derail the endeavour, can Team DBS find a way to help their client reach his goals?

Episode 2 – Pay It Forward
An unexpected visit takes Team DBS on a heartwarming journey where lives are forever changed by simple acts of
kindness. Together, they must find a way to save the social enterprise that has given hope to so many who are in need.

Episode 3 – From Grounds Up
The bankers find kindred spirits in two young entrepreneurs with a big dream. But with the odds stacked against them,
Team DBS must overcome one challenge after another to turn their dream into reality.