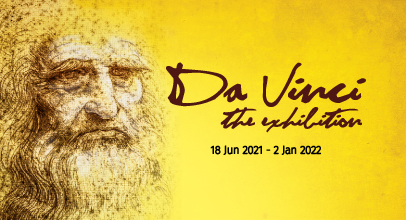 Step into the world of Leonardo da Vinci, a celebrated 15th century artist and scientist, at Science Centre Singapore’s latest Da Vinci The Exhibition: Be Inspired to Innovate.

It is one of the most robust and comprehensive touring exhibitions on Da Vinci in the world and a tribute to the Renaissance master and his relentless pursuit of knowledge across STEM and art fields including anatomy, engineering, physics, hydraulics and music.

The exhibition is curated by Argentina-based Aurea Exhibitions in collaboration with Fundación De Historia Natural. Their trained artisans interpreted and used Da Vinci’s Codices to design and reconstruct his inventions, bringing the master’s two-dimensional plans to life.

The sketches were never brought to life in the 15th century. Now, due to modern technologies, these can be seen for the first time at the Science Centre Singapore.

This wonderfully created exhibition not only features the largest collection of Da Vinci’s invention, it is also a hands-on exploration of da Vinci’s life, research and art.

Visit Da Vinci The Exhibition to learn more about history’s most creative genius.

Probably the most influential artist of the Renaissance period, Da Vinci sought a perfect combination of science, nature and art. He attempted to represent the world through his powerful masterpieces which, he believed, could transcend the verbal expression.

Discover the artist’s intricate designs and extraordinary early concepts on modern inventions, including the parachute and scuba suit. The exhibits include more than 50 life-size reproductions of da Vinci’s inventions and 15 reproductions of his most acclaimed fine art studies.

The 10,000 square-feet visual documentation of da Vinci’s outstanding discoveries include working models of his inventions, reconstructed replicas of his renowned paintings such as Mona Lisa, The Last Supper and a repository of his famous studies, such as the use of the Golden Ratio in his iconic works of art including the Vitruvian Man.