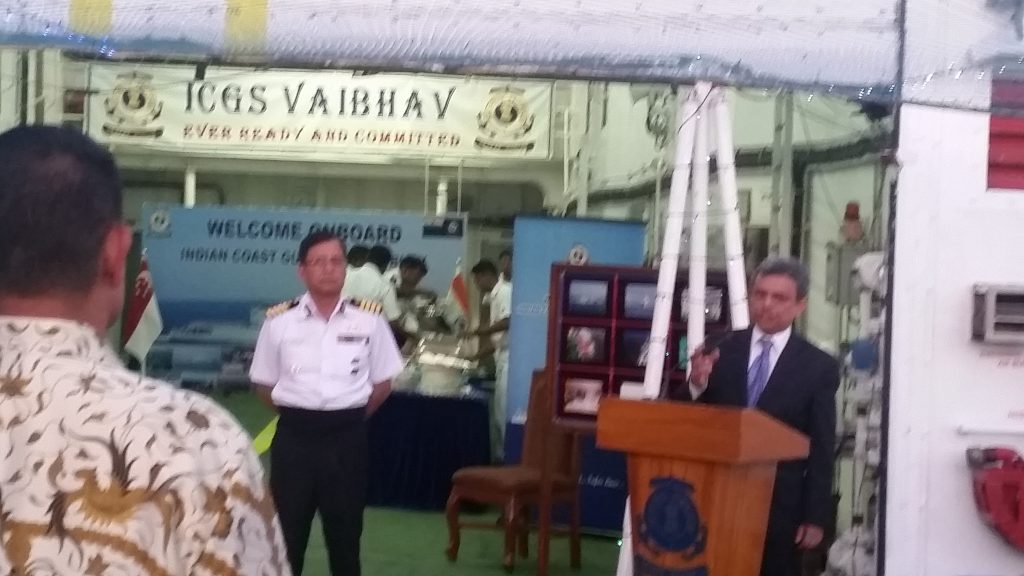 India’s Coast Guard have an unenviable task – safeguarding the country’s 7,516km coastline. In recent months they have also had to work hard to keep the sea lanes in India’s proximity and South-east Asia safe, protect the country’s offshore assets, rescue fishermen caught in cyclones and even protect endangered turtles.

Their extraordinary non-stop work received high praise from India’s High Commissioner to Singapore Jawed Ashraf (photo, right) on February 12, when he spoke at a reception held aboard the Indian Coast Guard vessel Vaibhav, which is on a visit to Singapore. “The spectrum of activities that they perform are truly head-on,” he told about 150 guests on board the ship. “The range of duties that they are performing truly deserve our greatest gratitude and admiration.”

During their three-day stay in Singapore, berthed at the picturesque Keppel Marina Harbour, the officers and men of Vaibhav held a series of training sessions with their counterparts from the Singapore Police Coast Guard (PCG). And, on their way to Darwin on February 14, the ship’s crew will engage in further drills in the high seas with PCG teams.  According to an Indian Coast Guard statement, the visit demonstrates India’s “Act East” policy and its increasing footprint and operational reach.

Mr Javed pointed out that the training sessions symbolise the close cooperation and collaboration between the Coast Guards of the two countries. “They learn a great deal from each other and share the best practices, they understand that when the time comes, and a call of duty summons them, they have the capacity and familiarity with each other to respond in a coordinated and cooperative manner to any distress in this region whether it is in term of national disaster or crime on sea or in terms of piracy,” he said.

The 12 officers and 140 men on Vaibhav have been at sea since last November. They were involved in locating and rescuing fishermen who were caught in cyclone Ockhi which struck India’s southern coast in November-December last year. After a two-day journey from their home port of Tuticorin to Port Blair in the Andamans earlier this month, they reached Singapore after a four-day trip from Port Blair. Their route to Darwin will take eight days. On the way back from Australia, they will stop in Kuantan, Malaysia, before heading home next month.

It is designed to carry a helicopter and five high-speed boats for search and rescue, law enforcement and maritime patrol. The vessel is also capable of carrying pollution response equipment to combat oil spill at sea.

Propelled by twin diesel engines which deliver 18,000 kW of power, the vessel has an endurance of 4,500 nautical miles and attains a maximum speed of 26 knots. It can stay at sea for 15 days without replenishment, which can be extended to 28 days during emergencies. The sustenance and reach coupled with most modern equipment and systems provide the OPV with a capability to perform the role of a command platform.