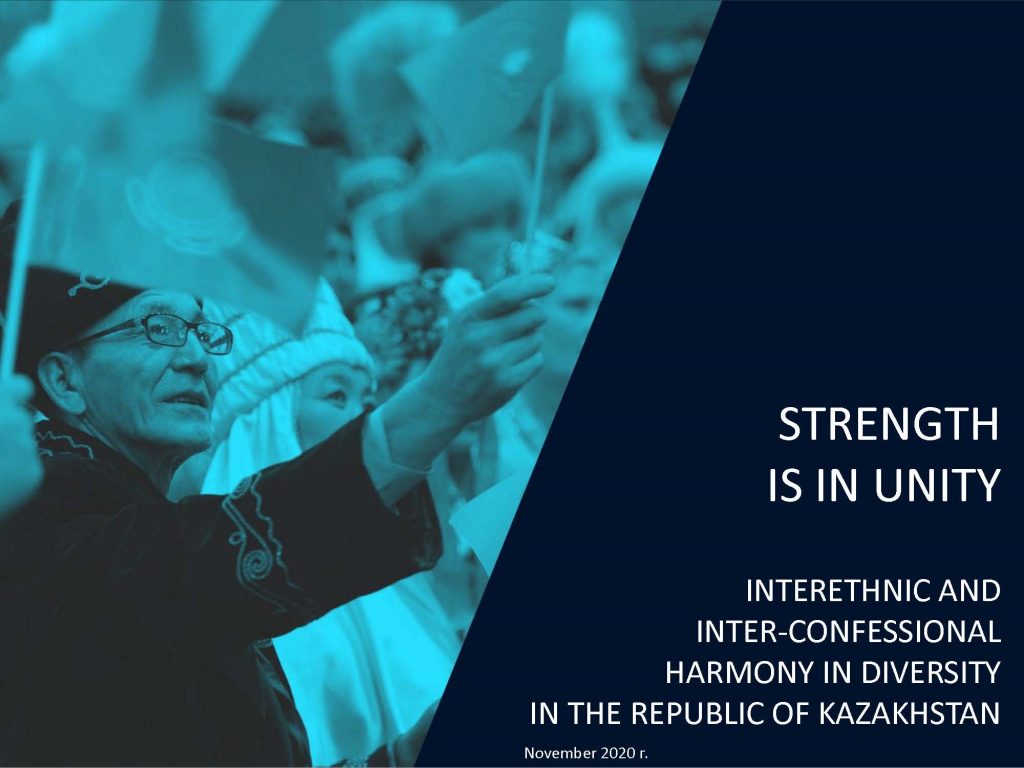 When Kazakhstan became an independent nation in 1991, the risk of ethnic conflicts was one of the most critical problems for the former Soviet nation member that inherited the world’s fourth-largest nuclear arsenal.

This was exacerbated by forecasts of large-scale armed conflicts and the risk of loss of statehood. The predictions were not unfounded.

Kazakhstan’s population was split along ethnic and linguistic lines. It was classified as a particularly diverse society in the Index of Ethnolinguistic Fractionalisation, calculated in 2001 by American researcher Philip G. Roeder, which analysed the degree of ethnic and linguistic diversity in various countries.

The situation looked even more complicated when applying the theory of overlapping lines of division, according to which the probability of a violent conflict multiplies if two such lines, for instance ethnic and social, overlap.

Clearly aware of these risks, in the early 1990s, Kazakhstan’s first President Nursultan Nazarbayev outlined the key ideas of a new policy in the field of nation-building – the preservation of ethnic harmony, ethnic diversity and the equality of citizens, regardless of their ethnic and religious affiliations. To strengthen and support ethnic harmony in the country, the Assembly of the People of Kazakhstan, a unique civil society organisation, bringing together representatives of 130 ethnic groups, was created in 1995. 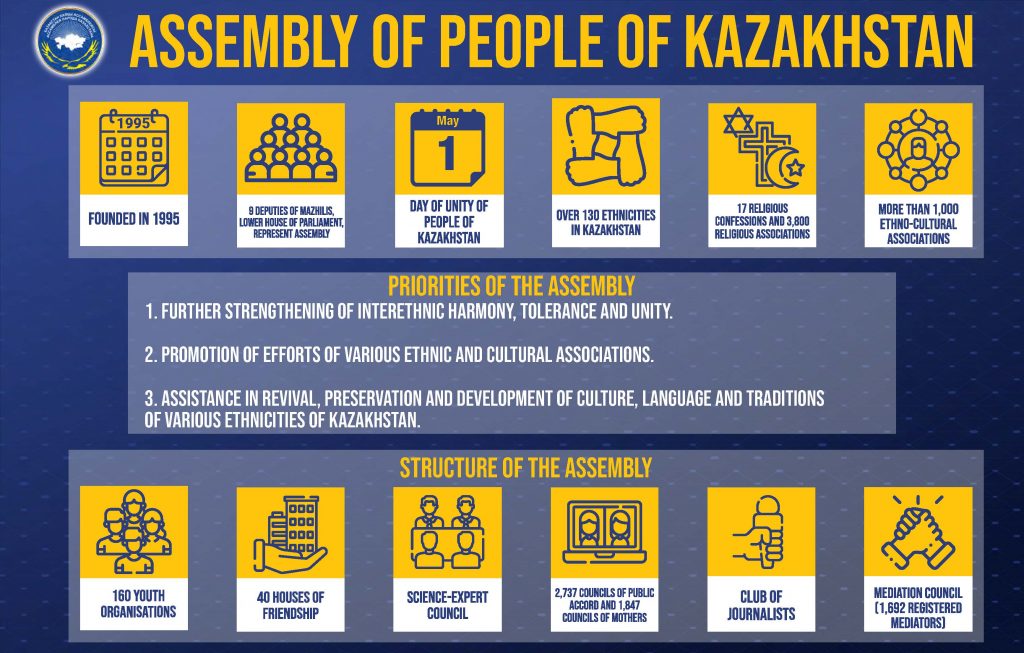 The Assembly of the People of Kazakhstan plays an important role in the formation of a unique model of social unity. Its main goal is to implement the national policy, ensure social and political stability in Kazakhstan and increase the efficiency of cooperation between state institutions and civil society in the area of ethnic relations.

The Assembly has undergone substantial development over the years and its authority is now recognised internationally. A session of the asembly is convened by the President of Kazakhstan at least once a year.

The Assembly has acquired constitutional status since 2007.

Over the years, several public structures of the Assembly have been created: councils of public accord, councils of mediation, a club of journalists, a scientific expert council, a youth movement, an association of entrepreneurs, among others. Furthermore, since 2007, the Assembly has been given power to delegate nine of its representatives to the Mazhilis (lower house of the Kazakh Parliament). 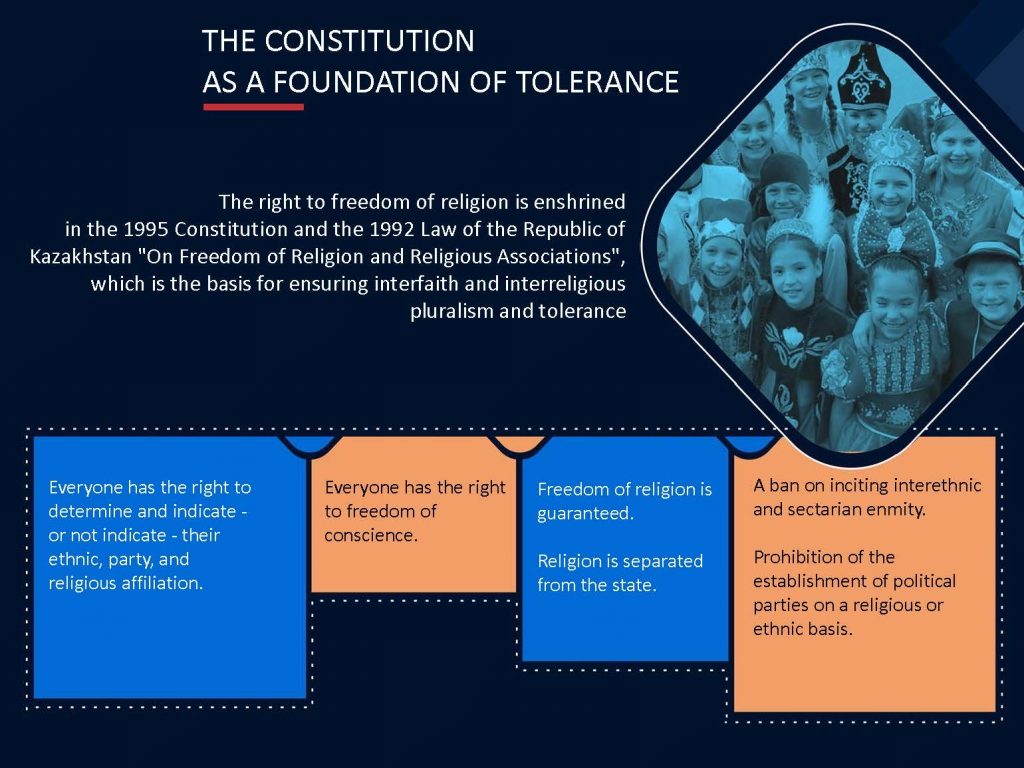 Under the asembly, there are more than 1,000 ethno-cultural associations (ECA), 29 at the state level.There are 160 youth organisations, with more than 6,700members, operating under the ECA and united under the network of the Assembly’s youth movement Zhangyru Zholy.

About 40 Houses of Friendship, multifunctional resource centres, have also been formed, along with a scientific and expert council, which was created to support the Assembly’s scientific and analytical activities. It has 52 scientists.

There are scientific expert groups, consisting of 262 scientists, working in all regions as part of regional universities. The scientific depository of the Assembly is situated at the National Academic Library. It has over 1,400 sources; most of them in electronic form. 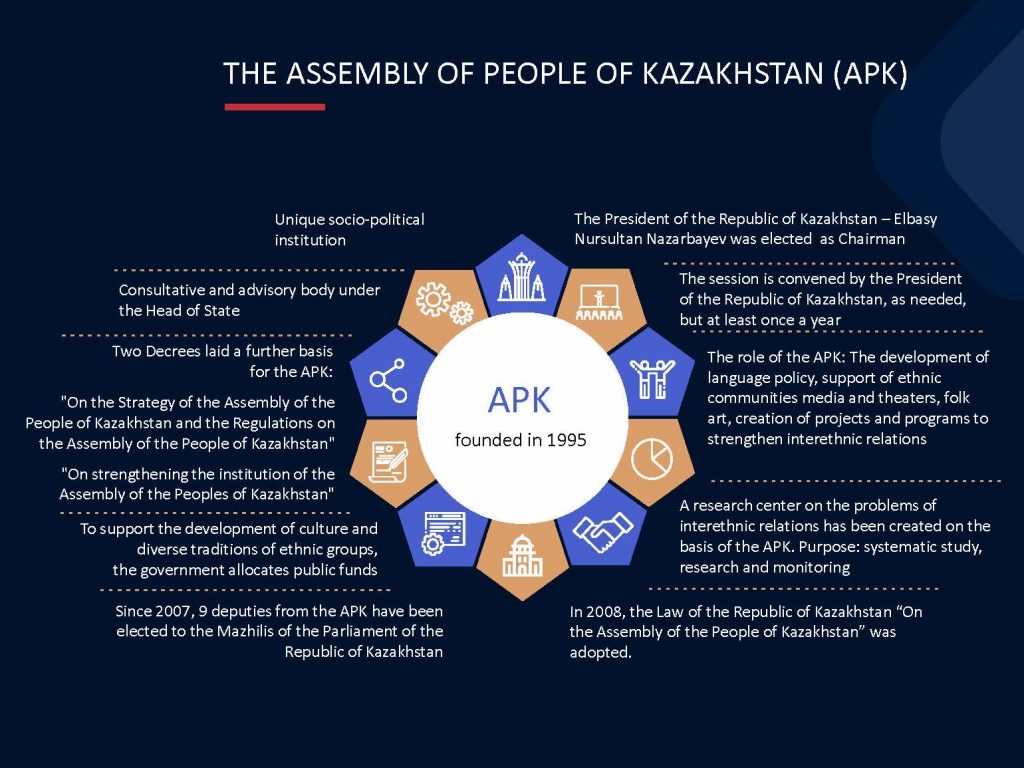 Under the Assembly, 2,737 Councils of Public Accord and 1,847 Councils of Mothers operate at the regional, city, district and village levels, as well as among workers of large enterprises. They are actively involved in solving urgent issues of the local population, including the prevention of conflicts.

Fifty-two ethno-cultural mass media associations are registered in Kazakhstan. One journalists’ club at the state level and 15 regional clubs operate within the Assembly.

Promoting mediation, social harmony and national unity are key priorities of the Assembly, which has a Council at the state level and 17 mediation offices at the Houses of Friendship which organise the work of 342 dialogue platforms. There are 1,692 registered mediators.

The Assembly also promotes charity in the country and provides coordination and other support. In the first quarter of 2021, the Assembly raised 187 million tenge (around US$440,000) at charity events and provided assistance to 4,715 families and more than 22,000 socially-vulnerable citizens. 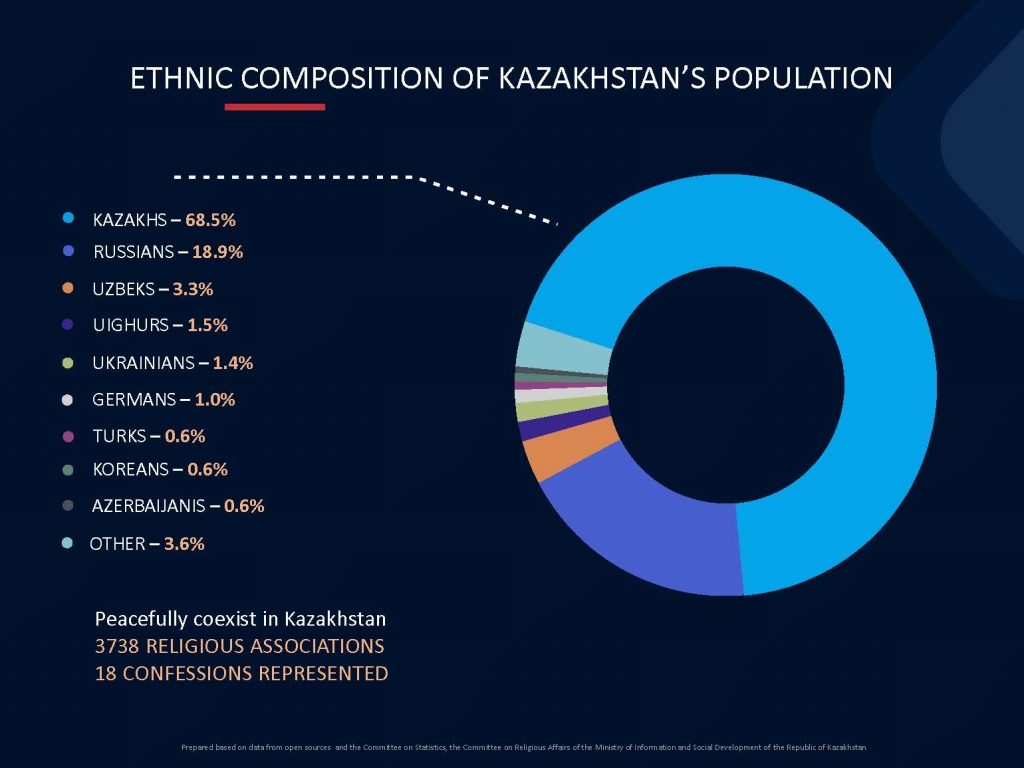 Kazakhstan has more than 130 ethnic groups, including Kazakhs, Russians, Uzbeks, Uighurs, Ukrainians, Germans, Turks, Koreans and Azerbaijanis. It also has 17 religious denominations and about 3,800 religious associations.

The Assembly contributes to the creation of favourable conditions for further strengthening the ethnic harmony, tolerance and unity. It assists government authorities in forming a political and legal culture of citizens based on democratic standards.

The Assembly’s role also involves promoting the efforts of various ethnic and cultural associations and helping to revive, preserve and develop the culture, language and traditions of different ethnic groups. It has contributed to the establishment of a unique model of ethnic and religious accord in Kazakhstan, with an atmosphere of trust, solidarity and mutual understanding, where every citizen, regardless of their ethnicity or religion, enjoys full civil rights and freedoms guaranteed by the Constitution. 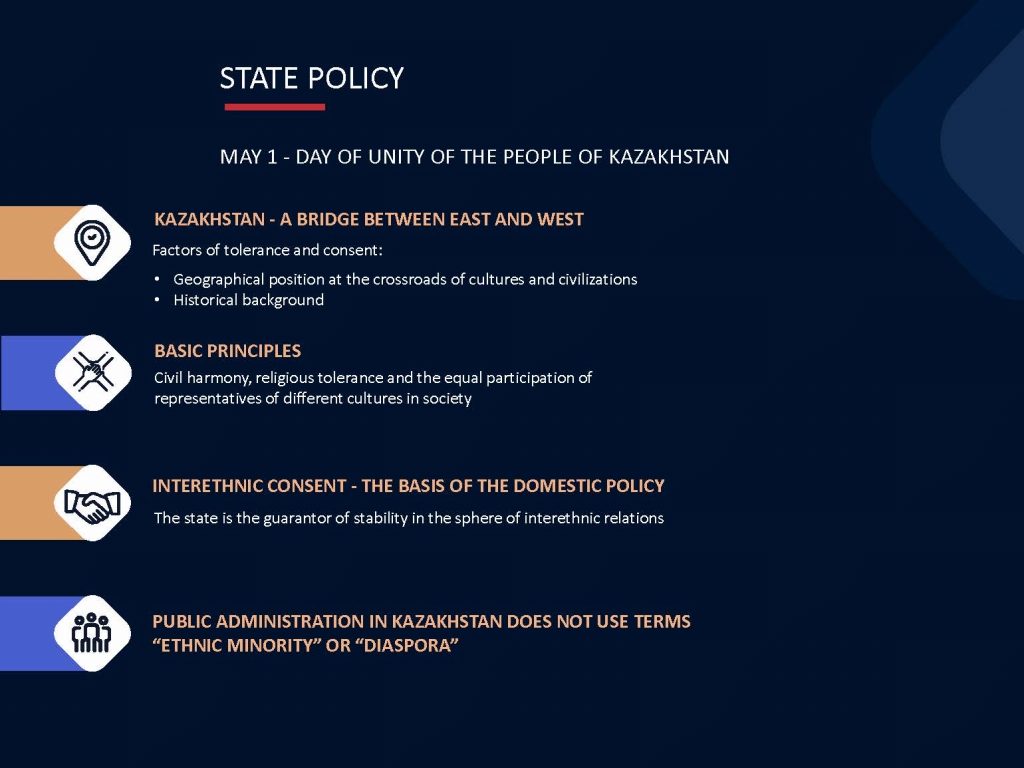 The experience and policy of Kazakhstan in the field of maintaining ethnic peace and harmony is of genuine interest to international organisations and states. In practice, each country’s situation is unique. Nevertheless, the Kazakh model, which has demonstrated its viability, is studied closely by many, with some countries developing somewhat similar structures.

The United Nations and the OSCE have previously commended Kazakhstan’s model of encouraging ethnic relations based on respect and its efforts to strengthen the unity of the nation. The Assembly itself has established formal links with the OSCE High Commissioner on National Minorities, the Centre for Global Dialogue and Cooperation and state and non-state structures of numerous countries.

The preservation of ethnic harmony is a basic condition for the development of any multi-ethnic country. Today, ethnic Kazakhs account for approximately 68.5% of Kazakhstan’s population, meaning that other ethnic groups make up 31.5%. 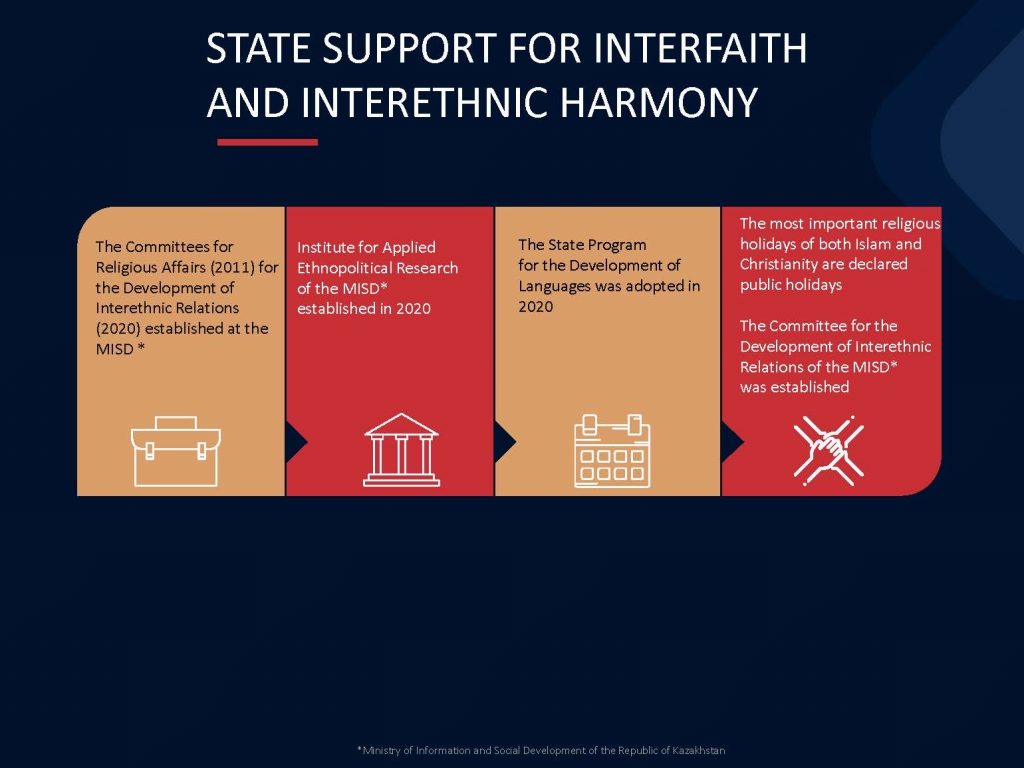 Nearly 30 years after Kazakhstan gained independence, Mr Nazarbayev, who is the chairman of the Assembly of the People of Kazakhstan, reaffirmed his adherence to the principle of unity in diversity, stating in 2020: “Peace, harmony and unity remain the key priorities of state policy. This is a principled position in the field of ethnic relations, and it will not change.”

He noted the existing demand for a new inclusive policy in ethnic relations, pointing out the importance of developing measures aimed at deepening the integration processes of society. He also pointed out that the Assembly should put particular effort in consolidating tolerance and preventing xenophobia among the younger generations. 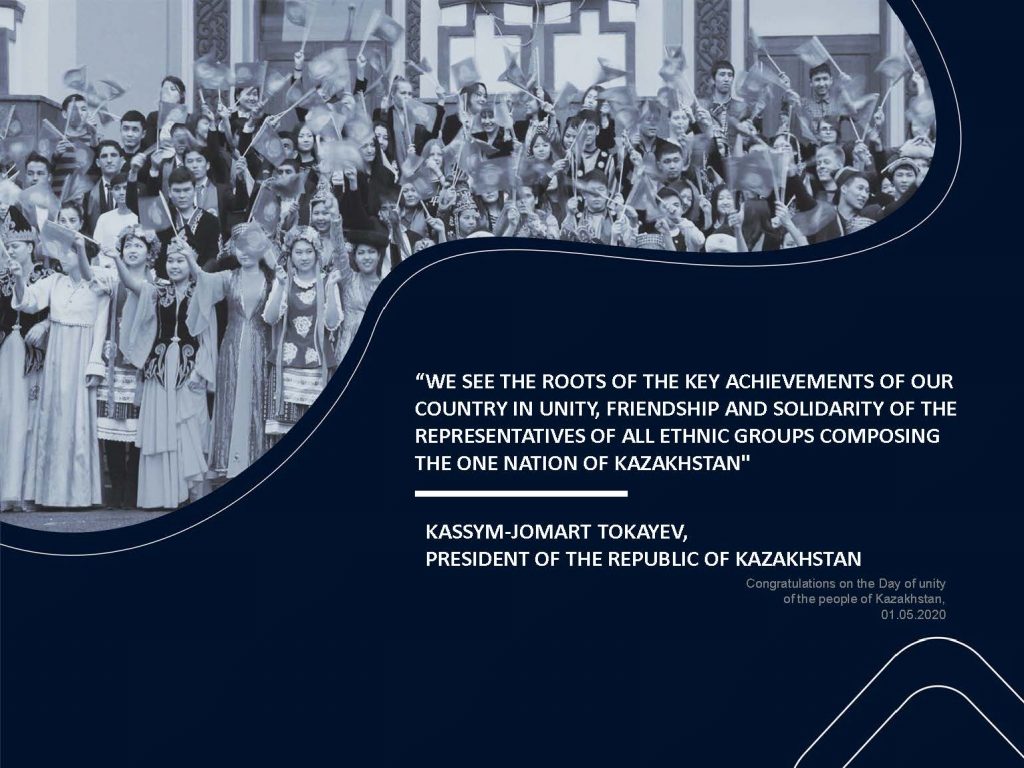 The policy of ethnic cooperation and strengthening peace and harmony is being continued and developed by the country’s current President Kassym-Jomart Tokayev. The Assembly of the People of Kazakhstan is there to play an important role in this. Over the last 25 years, the Assembly has evolved from a consultative advisory body to a legitimate advocate of the interests of Kazakhstan’s society, including through parliamentary representation.

The Assembly continues to face new tasks daily. But there is no doubt that over the past quarter of a century it has contributed to ethnic and religious harmony in the country. Kazakhstan has managed not only to preserve, but also significantly strengthen its socio-political stability.