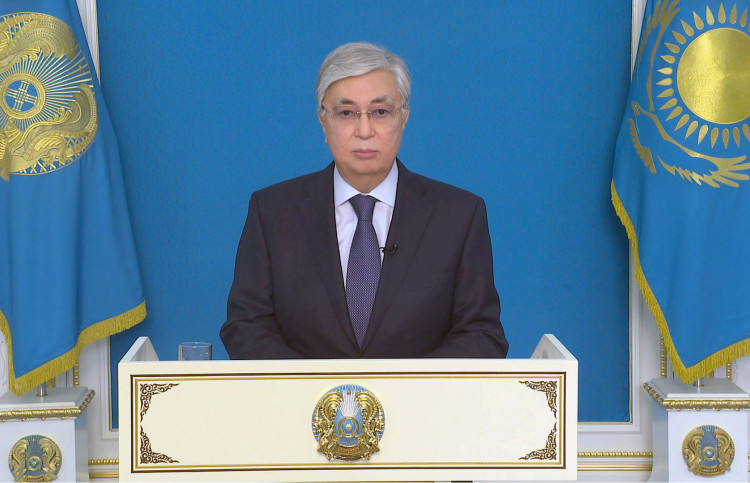 President Kassym-Jomart Tokayev on January 5 declared a state of emergency in Kazakhstan till January 19 to ensure public safety and protect the rights and freedom of people after protests over fuel price increase escalated into riots and attacks on government buildings in the Mangystau and Almaty regions.

As “the head of state, and from this day forward, the chairman of the Security Council” he  promised to act “with the utmost firmness” in an address to the nation on January 5.

The protests broke out on January 3 in the small town of Zhanaozen in western Kazakhstan after a double spike in price for liquid petroleum gas, widely used in the Mangystau region, to 120 tenge ($0.27) per litre.

People demanded the restoration of the price cap to 50 tenge ($0.12) – a demand the government fulfilled on January 3 evening.

It also released all those detained during the protest.

But then the protests quickly spread to other cities, including Almaty, Nur-Sultan, Shymkent, Aktobe and Atyrau and the demonstrators attacked the police and  government buildings.

In an attempt to curb the protest movement, Mr Tokayev on January 4 dismissed the government and declared a night curfew in Almaty, the country’s economic and intellectual capital.

But the protests did not abate and the police had to use stun grenades, tear gas and water cannons to disperse protesters on January 4 night and January 5.

Demonstrations were also reported in about a dozen other cities.

The attacks on government offices, military sites and the airport in Almaty and the taking of foreign passengers as hostages and the seizure of cargo planes showed the “high level of preparedness and coordination of the perpetrators”, said Mr Tokayev.

He added that preliminary analysis showed that the protesters were supported by “foreign terrorists” who have “received extensive training abroad”.

As the situation deteriorated, Mr Tokayev assumed the role of Chairman of the Security Council and called on the heads of states of the Collective Security Treaty Organization (CSTO) to provide military assistance and “defeat the terrorist threat”.

He also authorised Kazakhstan’s Armed Forces to ensure the rule of law.

“Calls to attack civilian and military offices are completely illegal. This is a crime that will be punished. The regime will not fall. But what we need is not conflict, but mutual trust,” said Mr Tokayev in his video address aired on the night of January 5. “All legitimate requests and demands on your part will be carefully considered and appropriate decisions will be made.”

The President warned during his address that law breakers would be treated with “maximum severity”.

He also stated that he will remain in Nur-Sultan, the country’s capital since 1997, regardless of the protests in Almaty and elsewhere.

Kazakhstan’s Ministry of Foreign Affairs said in a statement on January 5 that the government will continue to ensure the rights and interests of all citizens and the safety of foreigners in the country, including representatives of the diplomatic corp and journalists.

Foreign investments and businesses of foreign companies will also be protected.

It added that it is in constant contact with international partners on all current issues of bilateral and multilateral cooperation.