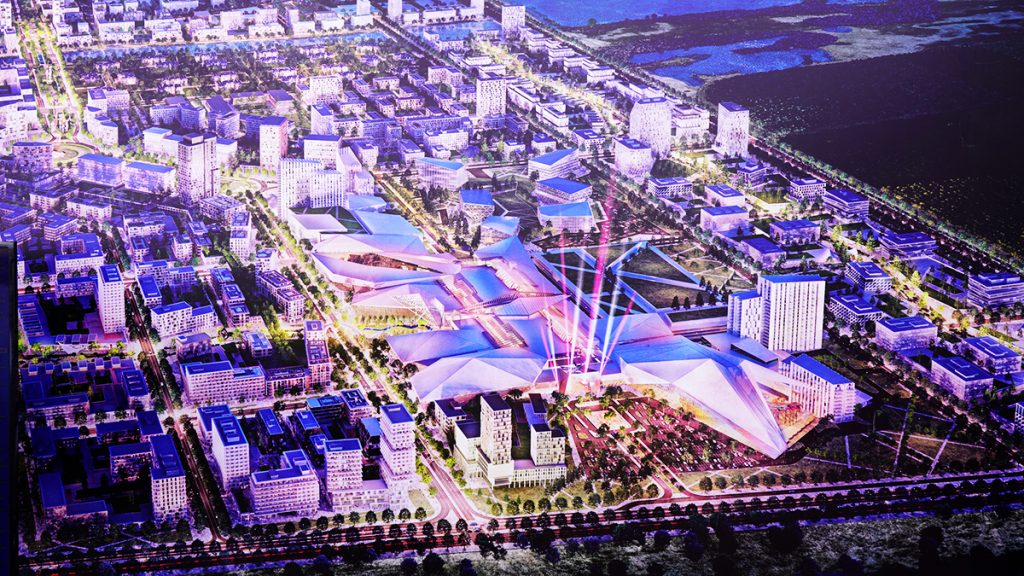 Prime Minister Askar Mamin committed to increasing the availability of modular housing in Kazakhstan during his recent visit to the first modular residential complex in Nur-Sultan, the country’s capital.

He inspected a 16-storey residential building with an area of 9,000 square metres which was built in six months. The construction time will be shortened by three months in future.

It has built-in high-quality furniture manufactured at the Shymkent and Pavlodar plants. The apartments are equipped with electronic locks with a fingerprint door opening function, built-in security system, IP intercom and other smart options.

Modular blocks can be used in the construction of residential facilities, social infrastructure facilities, including educational institutions, trade pavilions, offices and other buildings. It does not depend on climatic conditions as up to 90 per cent of work takes place at the plant.

“It is necessary to launch house-building factories and scale up the construction of modular housing nationwide.This will expand the construction capacities and provide people with affordable housing,” said Mr Mamin.

Overall, 100,000 square metres of modular construction is planned for Nur-Sultan by the end of 2021. 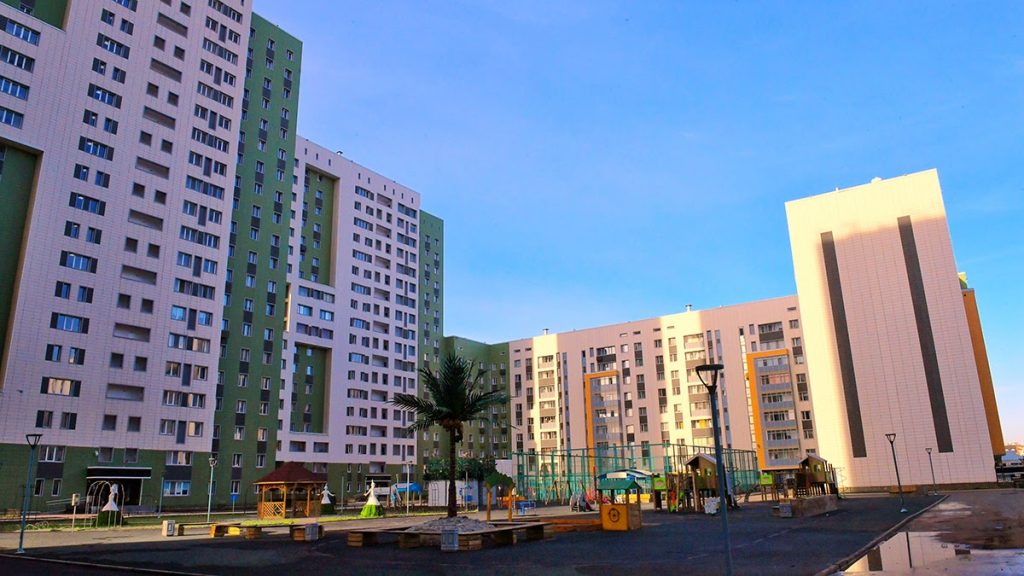 More than 700,000 square metres of housing was commissioned for the first four months of 2021 in the capital. Approximately 30,000 apartments will be additionally commissioned by the end of this year.

Nur-Sultan will also soon see the opening of a colosseum arena for street sports at the Ataturk park.

The arena will be used for basketball, football and gymnastics, as well as for boxing tournaments and dance battles. During winter, it will be used for hockey and figure skating. The two-tier construction will have four entrances, seating areas across its perimeter and shade awnings on the second tier.

The reconstruction of the Ataturk park, which started this year, includes its division into separate areas for street food, children’s playground, sports and fitness and a mini-playground for extreme sports. Five streetball courts, fast food pavilions, outdoor seating, swing sets and shade awnings will be established across the park.

“The main focus is the popularisation of mass street sports, as a part of the implementation of the President’s message to the people of Kazakhstan,” said the Head of the City Department of Architecture, Urban Planning and Land Relations Nurlan Urankhayev. This project is a part of the Nur-Sultan – the City of Comfort urban plan, a socio-economic strategy for the capital’s development. The strategy centres on landscaping the city’s parks, boulevards, abandoned sites and wastelands by turning them into areas for comfortable time and sport activity for the public.

According to Nur-Sultan Akimat (city administration), as of March 2021, more than 150 courtyards, 60 public spaces and 76 hectares of land have been landscaped as part of the plan. Earlier this year, the Akim (mayor) of the capital Altai Kulginov stated the administration’s intent to “continue to implement the green strategy: to plant trees and gardens and increase the number of green spaces in the city’s attractions and cultural sites”.

One of the specialties of the strategy is the utilisation of underbridge spaces that now contain basketball, workout and skating courts. These spaces are now located under the Saraishyk bridge and the bridge next to the Gumilyov Eurasian National University. 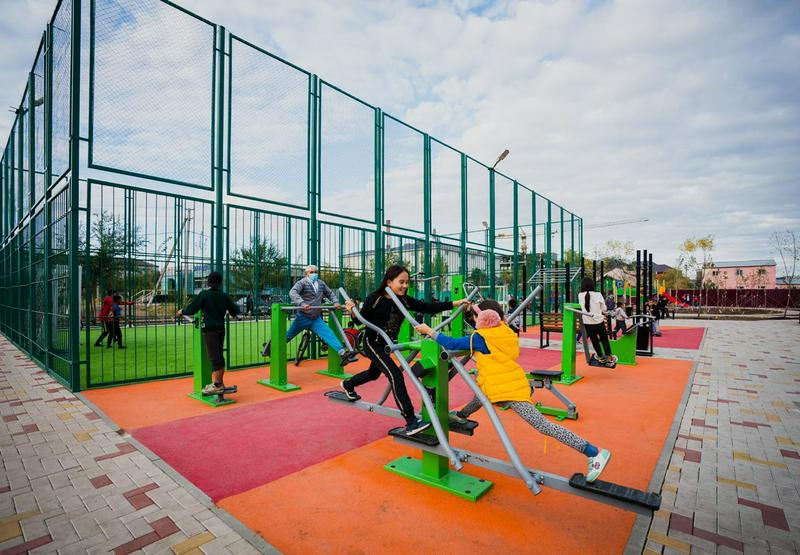 In addition to landscaping, the plan includes the construction of affordable housing, public facilities and repair and demolition of hazardous and dilapidated houses. The strategy has been shared and discussed with the residents of the city, NGO representatives and business communities.

In March, Mr Mamin also visited the construction site of the new multifunctional tourist centre in Nur-Sultan. The area is a part of the Nur-Sultan – New City special economic zone.

The total area of the complex is 2.6 million square meters with a building area of 333 hectares. Among the attractions of the complex is a large water park of 15,000 square meters, as well as playgrounds, parks, terraces, office and commercial real estate, hotels and social and housing infrastructure. The total cost of the project is expected to exceed US$2.3 billion.

The first stage of the project consisting of 29 hectares is planned to be finished by the end of 2022. This will create 21,300 temporary and 2,000 permanent jobs.

The tourist complex is only one of many Nur-Sultan’s projects in the works. Mayor Kulginov also outlined the main steps of the city’s development plan on his official Instagram account.

He noted that the capital has reached its 1.2 million population mark a decade earlier than was predicted in 2010. Such rapid expansion requires sustainable measures to accommodate the growing population of Nur-Sultan. 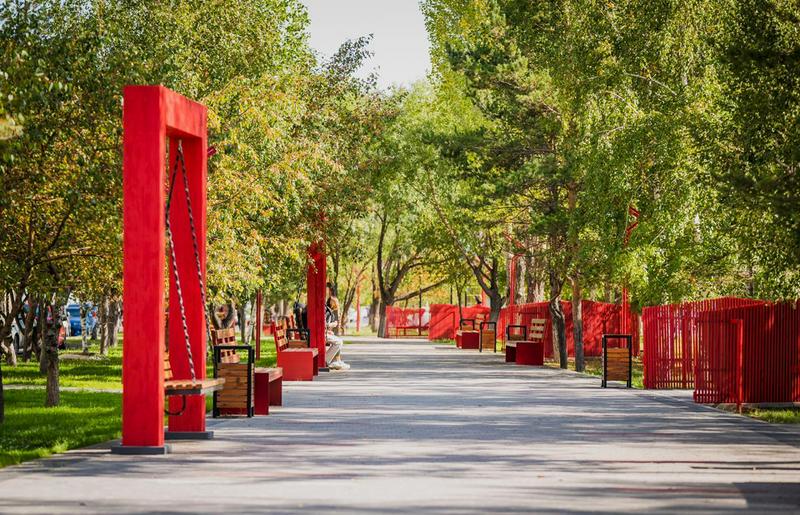 Among the key components of the capital’s urban development are increasing the number of social facilities and state-subsidised housing, creation of a road network around the city and building more water and heating supply plants.

The city administration plans to subsidise 10,000 apartments for social housing and build more bridges, schools, kindergartens and medical facilities by the end of the year.

The Mayor also noted that the implementation of the Nur-Sultan – the City of Comfort urban plan is underway, as well as the plan to improve the ecological situation in the city. One million trees will be planted in Nur-Sultan in 2021 to alleviate the city’s climatic conditions.

Two ecological parks will also be built near the Taldykol and Maibalyk lakes. The areas around the lakes will be landscaped to become attractive destinations for tourism and leisure. The Mayor reassured the public that the small Taldykol lake will be preserved.

“An increase in public spaces (parks, squares, boulevards) will help make the city truly more comfortable. The development of the capital is under the supervision of the country’s leadership,” said the mayor. In 2020, the capital of Kazakhstan marked its 22nd anniversary. The idea of creating a new capital for Kazakhstan stemmed from First President Nursultan Nazarbayev.

The decision to transfer the capital from Almaty to Akmola was made by the Supreme Council of Kazakhstan on July 6, 1994. The official transfer of the capital took place on December 10, 1997.

By a presidential Decree dated May 6, 1998, Akmola was renamed Astana. The international presentation of the new capital was held on June 10, 1998.

In 1999, Astana received the title of “City of the World” from UNESCO. Since 2000, the main city of Kazakhstan has been a member of the International Assembly of Capitals and Major Cities.

On March 23, 2019, by a Presidential Decree, Astana was renamed Nur-Sultan. At present, the capital territory exceeds 722 square kilometres and consists of four districts – Almaty, Saryarka, Esil and Baikonur.

Kazakhstan’s capital has gone through many changes over the years. By the time it was ready for its second name change, the city had already begun to change from an up and coming political capital to a burgeoning business centre and international city with a firm foothold in the world political arena.

Economic development has become the city’s cornerstone as it hosts numerous small and medium-sized businesses. More than 57 per cent of the GDP is based on these businesses’ economic activities.

The city’s small and medium-sized enterprises produce 20 per cent of all work and services in the country and their volume of production has increased by 33 times from 177.8 billion tenge (US$433 million) in 2005 to 5.9 trillion tenge (US$14 billion) in 2019.

Now there are more than 134,000 business entities in the capital. Every third resident works in small and medium-sized businesses. At first Nur-Sultan was a city of public servants and government workers. It is now a city of entrepreneurs. In 1999, a presentation was made for the master plan of the new capital, according to which the city will start fresh on the left bank of the river Yesil.

The year 2000 was the starting date for the beginning of an extensive development project of the left bank, where the construction of a new administrative centre began.

Investments in the economy of the new capital reached US$ 1 billion by 2001. The inflow of domestic investment more than tripled while foreign investment grew sevenfold.

In the spring of 2001, Mr Nazarbayev approved the State programme The Flowering of Astana – the Flowering of Kazakhstan. Its most important component was not only the development of the main city of the country, but also the increase in production in the industrial and construction sectors of the whole republic – due to the multiplier effect and the expansion of regional integration ties.

A huge milestone event for the new city was the visit by Pope John Paul II in september 2001. About 300,000 Catholics from many countries arrived to meet him in Kazakhstan.

On the eve of the celebration of Constitution Day, August 30, 2002, the dedication of the Baiterek monument took place. The idea of creating this unique structure belongs to Mr Nazarbayev. The monument thereafter became the main attraction of the Kazakh capital. 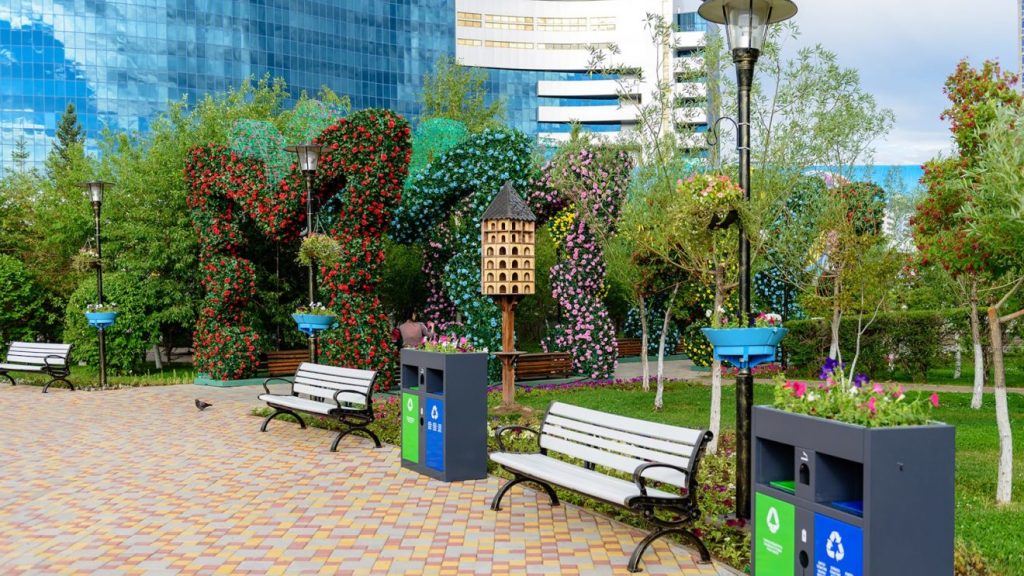 In 2003, under the chairmanship of Mr Nazarbayev, the first congress of leaders of world and traditional religions was held in the capital. Seventeen delegations of various religious faithsfrom around the world participated.

In the wake of the Covid-19 pandemic, Nur-Sultan has shown its ability to handle crises and mobilise an effective and timely response to any threats to public safety. This is further proof that the model on which the city was built is solid and able to withstand challenges.

The future of the city will continue to be built on the core principles modern management, progressive politics and integration into the international system.

Eventually, Nur-Sultan will not only serve as a positive force for improving and uplifting the rest of Kazakhstan, but will also become the cultural, financial and negotiation centre of Central Asia. A true crossroads of civilisations and peoples located in the geographical heart of Asia.

Nur-Sultan in the coming years will become an international city where the whole world can feel itself at home and come together to do business, promote peace and integrate Central Asia more fully into a global system of governance.

None of this could have been possible if it were not for the vision of Mr Nazarbayev and his tireless work to recreate a new, modern Kazakhstan that’s ready to welcome the world with open arms.