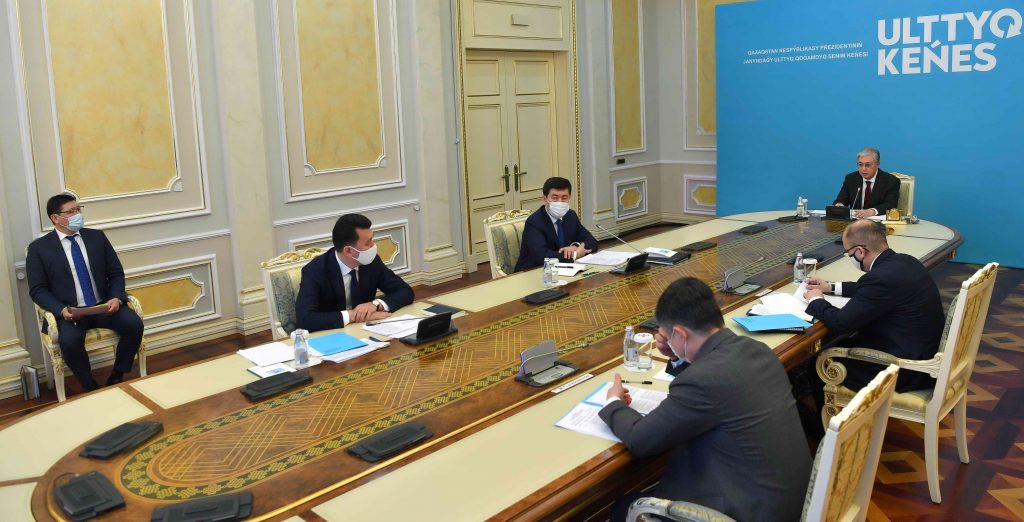 Kazakhstan President Kassym-Jomart Tokayev focused on five blocks of specific measures and initiatives in the political and economic spheres when he chaired the fifth meeting of the National Council of Public Trust on February 25, 2021.

He highlighted the improvement of housing and economic policy, ensuring equal education opportunities, the formation of an inclusive social environment, protection of human rights and the systematic implementation of political reforms at the meeting, which took place virtually.

Mr Tokayev set up the National Council of Public Trust in the summer of 2019 to better facilitate public input in the formation of national policies. On September 6, 2019, he chaired its first meeting at the Palace of Independence in Nur-Sultan. 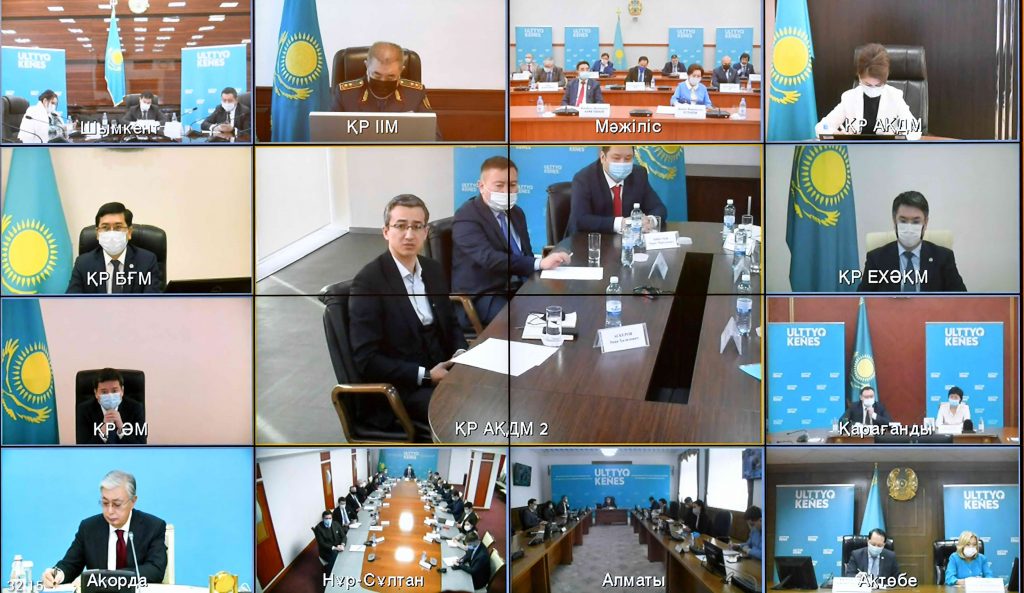 The council works on the principle of constant rotation, which allows new citizens, who work for the benefit of the country, to join it. They are expected to come up with new ideas and proposals and contribute further to the revitalisation of the council. At the Feb 25 meeting, the members of the council made several proposals.

“With the suggestions of the National Council of Public Trust, Kazakhstan adopted 13 laws, and nine more laws are being drafted,” said Mr Tokayev (below).  “The council members have done a lot of work. Initially, the council began its work as an advisory body, and today it has become an important structure for proposing new reforms. 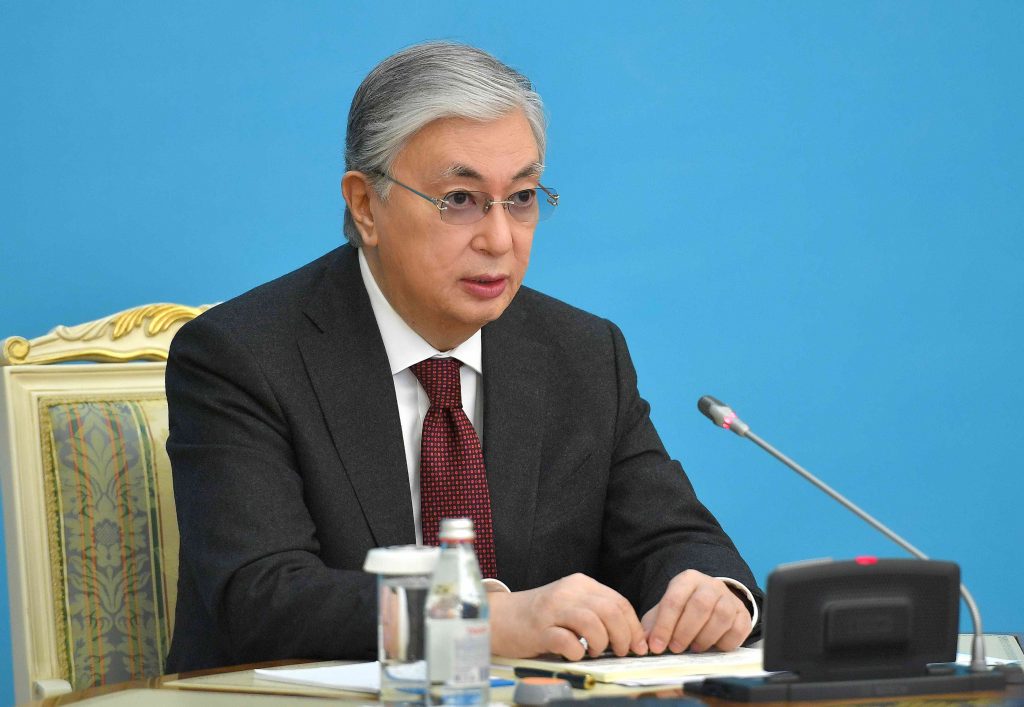 “The Kazakh government is consistently implementing the strategy of modernising the country. Our priorities are unchanged, improving all citizens’ quality of life, strengthening the nation’s human potential, building a just society and an effective state. In the previous council meeting, I announced that the year of the 30th anniversary of independence (2021) will be marked by economic and political reforms, the development of education and healthcare, digitalisation, the protection of human rights and addressing environmental concerns.”

The Council again emphasised the need to provide affordable housing, one of the main conditions for improving the quality of life in Kazakhstan.

Mr Tokayev said its initiatives include concluding offtake agreements with developers and solving the issue of housing in rural areas through state reimbursement of up to 50 per cent of employers’ expenses for the construction of residential blocks for their employees.

“In a month, thousands of Kazakh citizens have solved the housing issue by utilising part of their pension savings,” said Mr Tokayev. “People were able to pay off the mortgage, reduce the size of their loan. This is one of the ways to build a just society. This decision was supported by the council back then.”

Support for people with disabilities

The Kazakh President also highlighted the importance of the formation of an inclusive public environment as well as systemic support for people with disabilities, which is the characteristic of a progressive and socially responsible state. 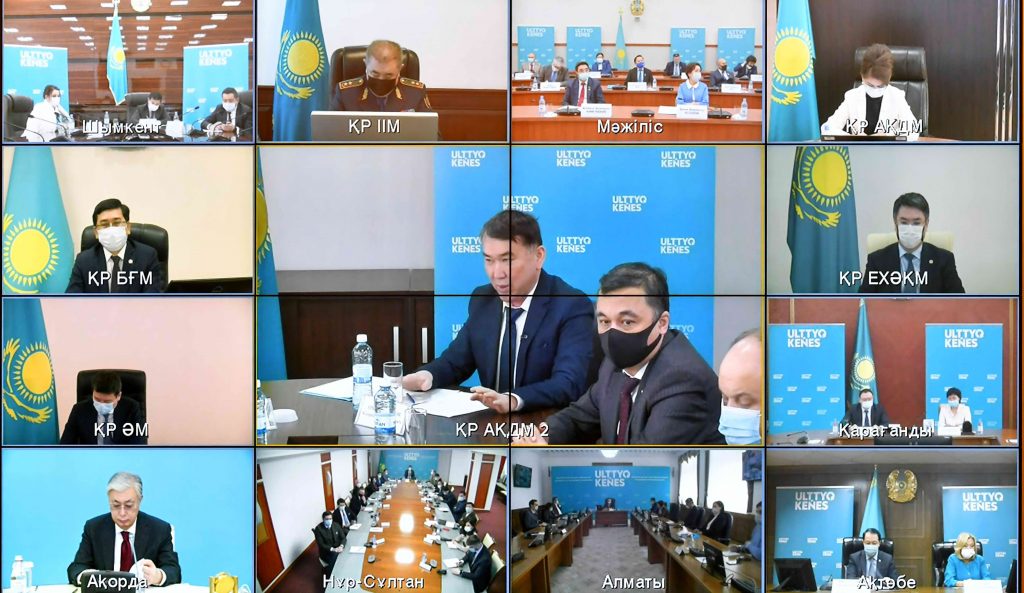 He said the initiatives will include updating norms regarding special psychological and pedagogical support for children with disabilities, improvement of screening of young children and strengthening of the activities of social services in primary health care organisations, development of a single route for a child with special needs and his or her family, simplification of the procedure for establishing disability by contacting only a medical institution and enacting legal acts to ensure barrier-free access for persons with disabilities and people with limited mobility.

“Earlier in Kazakhstan, experts ignored people with limited abilities, who often do not even have the opportunity to leave their home. The President’s proposal to resolve the issue of physical access for people with disabilities and improve infrastructure facilities is encouraging,” said Ms Aiman Zhussupova, an expert at the Institute of World Economy and Politics (IMEP). “This will bring these facilities in line with requirements, ensuring accessibility for all.”

“In current global practice, there are 14 global indicators developed by the Office of the United Nations High Commissioner for Human Rights,” he said. “I propose to start a gradual introduction of national indicators for assessing the observance of human rights on those basis.”

He added that among the new initiatives would be the restoration of the special unit for the protection of women and children from abuse under the Ministry of Internal Affairs and the introduction of female investigators to investigate violent crimes against women and children.

Plurality of opinion was a major vein running through My Tokayev’s speech and this vital tenet of democratic governance manifested itself in objectives and policy pledges covering several different areas of legislation, which were grouped under the title: “Different opinions – one nation”.

The ambitious and exciting reforms programme included mandating for no less than the legislative codification of a parliamentary opposition, a mandatory 30 per cent quota for women and young people in electoral party lists and the easing of regulations and restrictions on the creation of political parties.

President Tokayev also spoke of enshrining the right to freedom of assembly in law, unveiling plans for “conceptually new legislation” that would go beyond simple changes to the existing rules and making provision for the “organisation and conduct of all forms of peaceful assembly”.

His proposal to reduce the involvement of state-owned firms is a welcome step in the right direction towards a new (economic) growth model, which entails structural transformations of the economy that has been long used to oil dependency. The volatility of oil prices has revealed that in the long term Kazakhstan’s commodity-dependent economic model is not sustainable.

The tone of Mr Tokaye’s speech clearly indicated that the Kazakh leadership understands very well that a key pillar of transformation and diversification includes private sector development, with the state adopting a more hands-off approach and limiting itself to setting the enabling policies and regulatory environment conducive for a competitive private sector including SMEs, which typically drive innovation, growth and job creation in transition economies.

These reforms are critical for Kazakhstan to return to a sustainable growth path consistent with the country’s ambitious long-term goal of becoming one of the 30 most developed countries by the middle of the century.

Political scientist Marat Shibutov, a member of the council, said eight laws have been adopted in the legislative area, inluding ones to abolish the death penalty, lower the threshold for registration of political parties, permits for peaceful assembly and direct elections of akims (city governors).

Ms Aiman Zhussupova believes the National Council of Public Trust is becoming a key platform to initiate laws and develop measures for the democratic development of Kazakhstan and improve citizens’ lives.