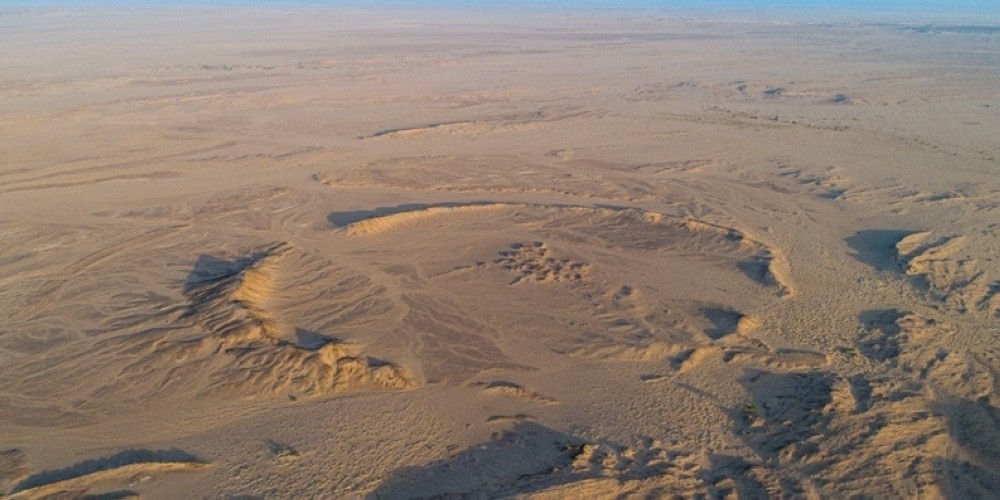 This 1-km wide crater in the desert in Oman’s Mahout province is one of the largest in the Middle East. It is believed to have been created by a 50-metre-wide meteor that struck the earth 60 million years ago.

A huge crater about 1 kilometre wide has been found in Oman’s Al Wusta region. TheDepartment of Earth Sciences at Sultan Qaboos University, which announced the discovery, described it as one of the largest impact craters in the Middle East.

Professor Sobhi Jaber Nasr said it was formed by a meteor 50 to 60 metres wide that struck the earth about 60 million years ago. He said the crater provides the opportunity for studying the effects of a meteorite impact and will also shed light on Oman’s distinctive geological heritage and the presence of ophiolite rocks.

The crater was found in the desert in sparsely populated Mahout province, 430 km south of Muscat.

When rock fragments from the site were analysed, they showed signs of having melted and recrystallized. Rocks that had not melted contained impact minerals such as quartz crystals with a distinctive pattern of parallel, flat cracks, caused by shock waves traveling through the bedrock.

They also contained another mineral, calcite. A second feature was the presence of teardrop-shaped glass fragments, and pieces of glass perforated with small holes, the result of gas bubbles. The two features show the intensity of the meteor’s impact.

The Al Wusta region is a great expanse of gravel desert known as the Jiddat al Harasis. It is one of the places in Oman where Martian and Lunar meteorites have been found. According to the Meteoritical Society, an international planetary science organization, 13 of the 137 Martian meteorites discovered on earth so far were found in Al Wusta.

The crater in Mahout will help advance scientific studies and also add to Oman’s national heritage.

The presence of certain minerals at the crater site and the possibility of developing it as a tourist site will also give it an economically significant role.