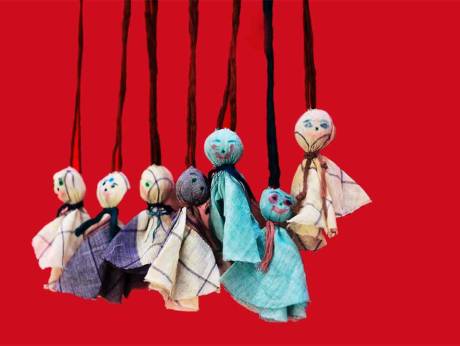 The state of Kerala in India survived one of the most destructive floods in August. So many things and people’s livelihoods were destroyed.

Among the cities affected is a place called Chendamangalam – a centre for handloom weaving. The weavers were already a bit down due to the entry of the powerloom and the floods destroyed whatever was left too – almost all the finished products and sarees. All the sarees were ready to be burnt when their saviours reached the place.

Ms. Lakshmi Menon, the founder of Pure Living Foundation, an organisation that upcycles waste materials, and Mr. Gopinath Parayil came up with an idea where all the dirtied clothes were taken, washed and chlorinated and made into small dolls, because not much could be done with the clothes due to the poor quality it had after the floods.

The dolls – called Chekkutty (meaning the child of Chendamangalam) – are then sold for a small price to the public. The money gained from this is then given to the weavers for rebuilding their community.

The dolls have become the mascot of the state and reflect the struggles of the people of Kerala to overcome the floods.

The dolls have gone viral, reaching all the way to the United States. Schools in the US have started making these dolls.

Ms. Menon has associated with Malayalis in the US who are senior management personnel working at the Google headquarters at Mountain View, California, in the making of a Chekutty app.

To show our love and support to this great initiative, a Chekutty workshop was organised and conducted by Mrs. Jayanthi Jyothish and Mrs. Suja Thampi on the October 6. Around 75 people gathered at the Singapore Malayalee Association Hall in the morning to make the cute dolls and unleash their creativity.

Every person who came in walked away with the cute dolls that were made with their own hands and the satisfaction that they were part of rebuilding a weaving community back in their homeland. The dolls were taken home by paying a small price of $2.