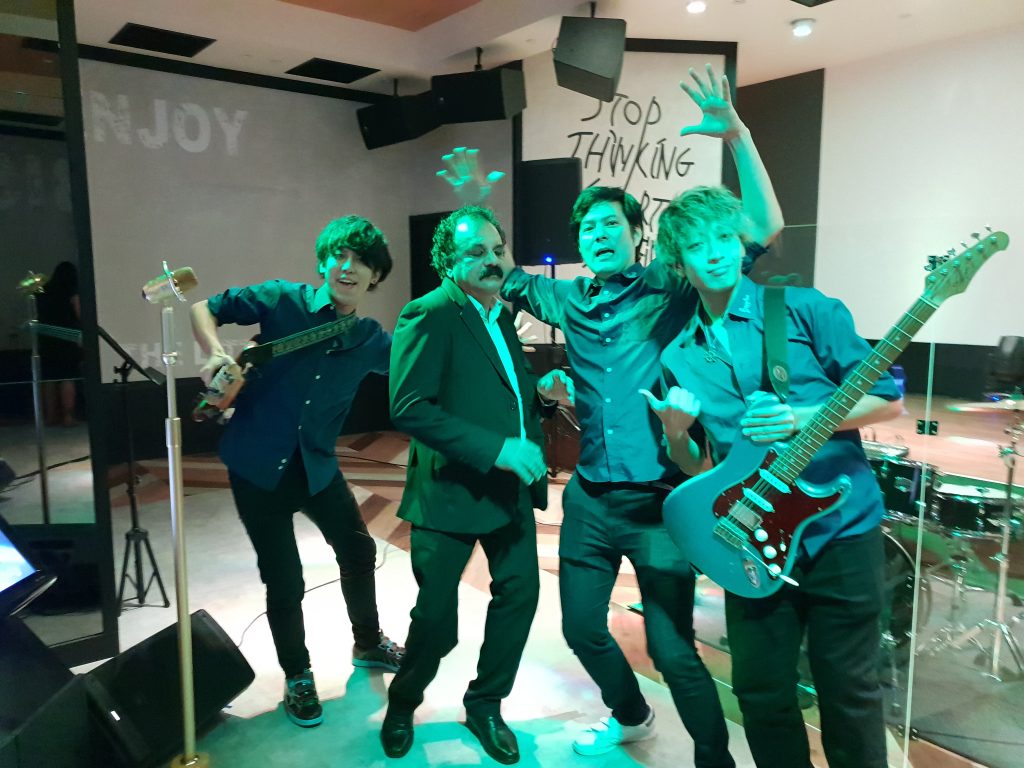 Have you ever been to a karaoke session with your friends and you constantly wonder what would it be like to have a live band playing behind you while you jam and sing your heart out?

Have you dreamt of standing on a stage and singing in front of a group of people?

You can now do that at BandKara!

On 29 November 2019, BandKara by Bistro8 opened its doors to the public.

Bistro8 is a buffet restaurant and bar that offers a delicious experience with a menu featuring Chinese, Western and Japanese cuisine and bites.

Located conveniently at Cineleisure, Level 8, a 5-minute walk from Somerset MRT, Bistro8 is open from 11AM – 8:30PM and BandKara from 9PM onwards.

BandKara is a Japanese live band karaoke restaurant and bar concept from Tokyo. It is a popular activity in Japan that sees individuals get the opportunity to sing popular karaoke songs in front of an audience accompanied by a live band.

With over 250,000 songs, everyone will get a chance to stand on the stage and sing to their hearts’ content!

The live band is well equipped to play any song from any genre regardless of language.

Customers can go on to play the instruments or bring their own if they’d like to. They can even perform without the
karaoke background music to further build up the adrenaline of performing on stage.

BandKara is similar to a collaborative space where music enthusiasts come together to enjoy playing music, performing and simply have fun. 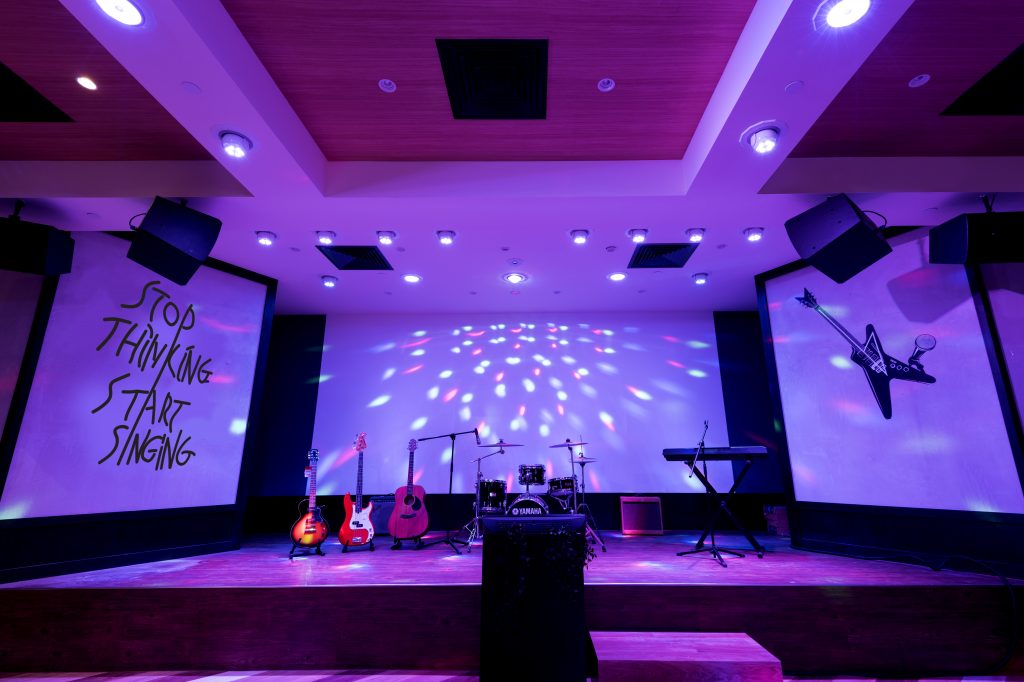 Mr Nobuhiro Genmei, Chief Operations Officer of Koshidaka Singapore, believes that everyone can have a good time at
BandKara, by reliving their dreams as a superstar or just by chilling and enjoying the live performances.

Kaito Kawade, 24, is a guitarist and currently works for his own band “MinorWorks”, while providing live support for artists, recording and guitar instructors. He started playing the guitar at the age of 16 and admired X Japan. Kaito then entered a music school after winning its contest and he was also on the cover of a magazine.

Sho Nakajima, 29, is a bassist from “Arbil City”, which has released albums and singles throughout Japan. He has supported major artists and voice actors, and has performed in opening character songs for smartphone apps, girl games, and composing ending songs. Sho also released two albums as a support base for his label artist “KentKakitsubata” after working at a DTM and a composer vocational school.

Shingo Okada, 33, started playing the drums at the age of 10 and formed a band called CLUTCH at 16. When he was 19, he made an indie debut on a television programme audition and proceeded to release albums and singles throughout Japan.

At 23, he had over 120 live shows a year, and appeared in many university festivals and adult ceremonies. By 25, he made his major debut in Avex, and was selected to perform for theme songs in anime such as “Major”, “Initial D”,
“Transformers Prime”, and “Battle Spirits”. Since then, Okada is a manager and a drummer at Ebisu BippAra, where he helps produce new artists.

For shyer guests who may not want to sing, chill and indulge in BandKara’s delicious menu; everyone can have a good time at BandKara! 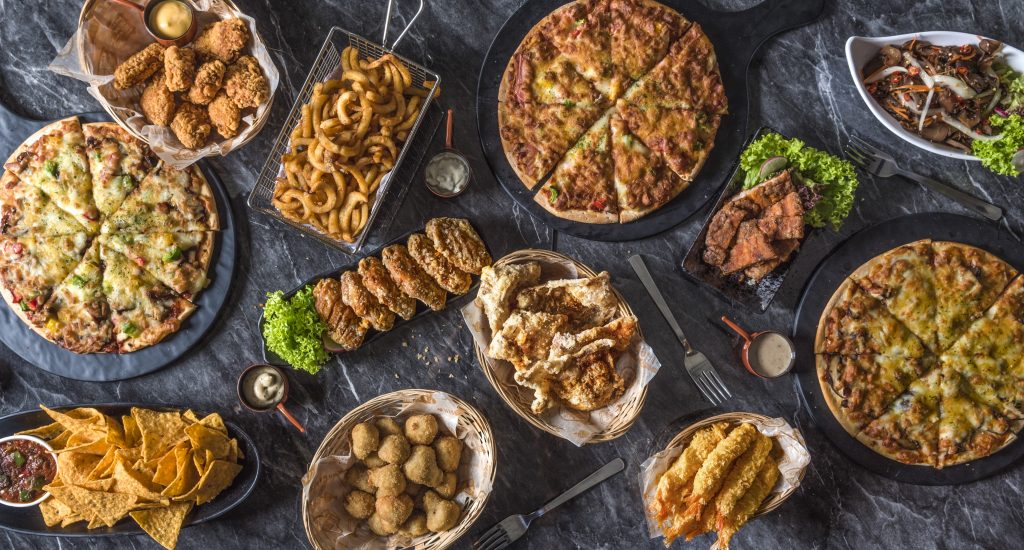 BandKara serves the Super Mario as a plate of fried buttoned mushrooms, the Japanese Chix as a plate of piping hot Chicken Teriyaki Pizza. Otherwise, try out the Curly, Curly, a mouth-watering dish of Truffle Curly Fries, or their Chicken, Prawn or Me, a classic twist of Prawn Paste Chicken. Want to try out the Hot & Sexy? What else to say, but a plate of hot and spicy mid-joints, guaranteed to leave everyone hot and maybe asking for more!

Mingle around with Hay, Hay, Hay, a plate of deep fried ebi served hot and crispy!

To pair up with such mouth-watering dishes, BandKara would highly recommend:
For the light-drinkers:

To celebrate its official opening, BandKara will be offering 1 free drink (alcohol/non-
alcohol) to its first 500 customers!

Unwind and chill at BandKara with your favorite band of friends and step on the stage to release that superstar that’s been kept in for too long!
BandKara by Bistro8 is also available for booking for private events, birthday celebrations, corporate functions; simply email [email protected] for more information.