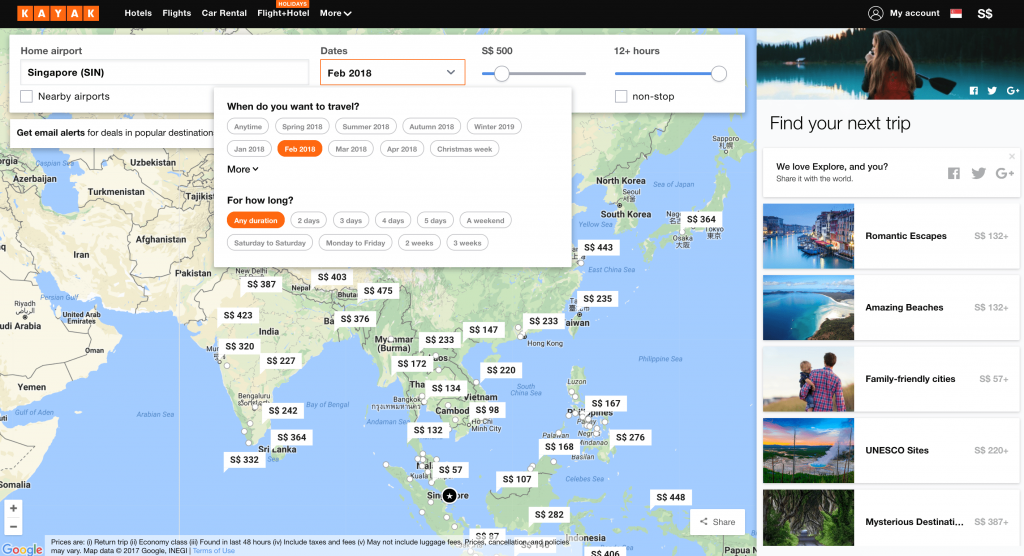 Knowing Singaporean travellers’ best interest lies in scoring the best travel deals to get the maximum from their dollar, the world’s leading travel search engine Kayak examined millions of travel searches to find out which is the best time for them to book their air tickets to top destinations.

The data and analysis cited are based on searches originating from Singapore for economy return flights made on KAYAK.sg from 1 January 2017  to 15 January 2018 for the travel period 1 January  to 31 December 2018.
Potential savings are comparing the cheapest month with the most expensive month of booking in advance to the travel date.

According to Kayak, 23 per cent of Singaporean travellers plan for their trips only one month in advance. But the good news is this does not necessarily mean overpaying for a ticket. In fact, many popular destinations may even be cheaper when booked close to the date of travel. These include Bangkok, Singaporean travellers’ top-searched destination for 2018 travel.

Best-value destinations for travellers booking one month before trip

Data is drawn from the 100 top most-searched locations with best savings in final month before travel.
All potential saving claims are based on the flight prices found for specified range of search dates and may change, varying with time.

Whey Han Tan, Kayak’s Regional Manager, South-east Asia, said: “We’ve looked into millions of travel searches to help Singaporean travellers plan their travel with confidence. Our data shows that, for many popular destinations in the region, good deals are still available just one month out. However, for many destinations further out like Los Angeles and Christchurch, travellers should really book as early as possible – up to seven months in advance to get the best return airfares.”