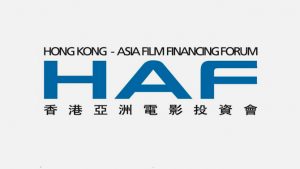 The 16th Hong Kong-Asia Film Financing Forum (HAF) announced its lineup of 25 film projects to be presented from 19 to 21 March 2018 at the Hong Kong Convention and Exhibition Centre. The projects were selected out of more than 360 submissions from 41 countries and regions, including Australia, China, Germany, Hong Kong, India, Kazakhstan, Japan, the Philippines, Singapore, South Korea, Taiwan, Thailand, the United States and Vietnam.

HAF is one of the most prominent film-financing platforms in Asia and provides a forum to connect filmmakers and their new projects with internationally established  film financiers, producers, bankers, distributors, buyers and funders for potential co-production ventures. The successful shortlisted projects come from a richly diverse field of filmmakers - young and established alike -seeking partners and funding. This year's selections also include projects from three countries that will be represented for the first time at HAF: Cambodia, Mongolia and Russia.

"As we welcome projects from all over Asia and other parts of the world, we are particularly pleased to see filmmakers from three countries new to the Hong Kong - Asia Film Financing Forum find a showcase for their works," said Jacob Wong, Curator of the Hong Kong International Film Festival Society and Director of the HAF. "In reviewing hundreds of submissions, it was encouraging to see a talented group of directors seeking to tell their stories in the universal language of film."

Five projects from Hong Kong are among this year's short list: Deadline, a suspense-drama about a group of seven secondary-school students facing exam pressures and issuing a suicide pact, from director Kiwi Chow. Chow's first feature film, A Complicated Story (2013), which was presented by the powerhouse team of producers Johnnie To and Bill Kong, was selected for the 37th Hong Kong International Film Festival. Chow also directed the "Self-immolator" segment of Ten Years (2015), which won Best Film at the 35thHong Kong Film Awards.

Director Chan Ying-wai's coming-of-age drama I Promised follows a teenage boy as he experiences desires and responsibilities, sweetness and cruelty in the aftermath of a tragic event; Yuen Han-yan's documentary Love in the Valley of Daughters explores the love story and cultural differences between a city woman and a man from a matriarchal society in China's Yunnan Province; film-industry veteran O Sing-pui's romantic comedy-drama Sex is Guilt looks at death and sex, and asks which of the two is the greatest fear? The comedy While You Were Working from director Leung Ming-kai looks at a retired Hong Kong singer and her American neighbour who help a Filipino worker prepare for a singing competition.

There are four film projects from Cambodia, Mongolia and Russia - three countries that will be represented at the event for the first time. From Cambodia, Jake Wachtel's suspense-drama In the Next Life follows a young teenage girl living in Phnom Penh's slums who investigates a boy's past-life visions and uncovers a sinister conspiracy of literal, scientific reincarnation. In Twist of Fate, director Baasanjargal Orgodol of Mongolia seeks to genuinely portray the "true reality" of nomadic Mongols in his drama about a woman who marries twin brothers and whose unconventional life leads to conflict and death.

Two projects from Russia look at love, marriage and betrayal. Set in Kyrgyzstan, Far Frontiers from director Maxim Dashkin explores the complicated relationship between faith and fidelity in his drama about the wife of a military commander who begins an affair with another officer. Tajikistan-born filmmaker Nigina Sayfullaeva's Revnost examines the motivations of a woman who suspects her husband of having an affair and exacts revenge by entering sexual relationships with other men.

Among this year's short list are five established and award-winning directors who will be presenting their latest projects. In China filmmaker Emily Tang's A Man Used to Stay at My Room, a young disabled woman seeking to break away from a loveless marriage finds fame as a poet. Tang's Perfect Life (2008) won the Tigers & Dragons Award at the Vancouver International Film Festival and the Golden Digital Award at the Hong Kong International Film Festival. Mainland director Liu Jian's third animated feature, following Piercing (2010) and Have a Nice Day (2017), is Art College, a bitter-sweet look at youth, love and school life of two art students in the 1990s.

The Big Picture, the new project from E J-yong - the critically acclaimed South Korean director of Bacchus Lady (2016), Actresses (2009) and Scandal (2003) - follows a lawyer facing a mid-life crisis and who accidentally kills a man and steals his identity to realise his failed dream to become a photographer.

Naive Melody from Taiwan-based director Arvin Chen, whose feature debut Au Revoir Taipei (2010) won the Asian Film Award at the Berlin Film Festival, is about an introverted young man who visits a brothel to lose his virginity, but instead falls into a complicated relationship with the brothel's much older mama-san. In A Mountain Splits, Japanese director Tomina Tetsuya explores the conflict and dilemma between "the visible" and "the invisible," which live in the same world yet are unable to intersect.

A trio of projects from Indonesia include Tale of the Land from Loeloe Hendra, about indigenous populations facing threats to their way of life; Vengeance is Mine, All Others Pay Cash, from Edwin, which takes aim at a society ruled by machismo and patriarchy; and Eddie Cahyono's Imah, which follows a fisherman searching for his wife's killer.

There will be a number of awards and cash prizes from several returning sponsors, including mm2 Asia Limited, which will be back for a second year after its inaugural prize in 2017. The award seeks to encourage and support Chinese-language film projects with a cash prize of HK$100,000.

HAF also unveiled the 10 shortlisted projects for the Work-in-Progress Lab (WIP Lab), an initiative to help filmmakers secure post-production funds, sales agents and film festival support. The event will take place on 19 March 2018 at the Hong Kong Convention and Exhibition Centre as part of HAF.

HAF is one of Asia's most important film-financing forums, providing a platform for projects in the pre-production or development stages. The WIP Lab further extends the services of HAF by offering a platform for late-stage projects seeking closing funds, post-production partners, distributors, sales agents, festivals and other film-industry services.

The 10 shortlisted projects, which were chosen from 141 WIP Lab submissions, are required to have completed or nearly completed shooting or production. This year's projects include five films from Asia and five from diverse countries around the world.

Two dramas from China explore families in conflict. Director Huang Zi's first feature, From Black and White to Shades of Grey, which was previously selected at HAF 2014, looks at the agonising trauma placed on a family when the father is diagnosed with cancer. In Zhai Yixiang's Mosaic Portrait, a journalist investigates the rape of a teenage girl in a remote village. The project won the Million-Dollar Grand Prize of Taipei Golden Horse Film Project Promotion in 2016.

Three Russian films take on social issues confronting the lives of ordinary people. In director Sergey Dvortsevoy's The Little One, an illegal immigrant woman from Kyrgyzstan working in Moscow attempts to find her abandoned baby. In The Pencil by Natalya Nazarova, a teacher defends her students against a gang leader. Co-directors Natalya Merkulova and Alexey Chupov offer a parable about a man who attempts to deceive death by changing his sex in The Man Who Surprised Everyone, a co-production with France and Estonia.

Two feature debuts by Asian filmmakers are also on the WIP Lab short list. Japanese director Sakahara Atushi's documentary,  The Atonement, looks at his personal experience as a victim of the sarin nerve gas attack on the Tokyo subway in 1995, which killed 13 people, injured nearly 6,000 and made headlines around the world. Bhutanese director Tashi Gyeltshen describes The Red Phallus as "about the paradox of being a human".

Bulgarian director Svetla Tsotsorkova's drama Sister tells "the story of how one girl becomes a woman," and how she learns that if one wants to stay human, sacrifices must be made. From Panama, Felix Guardia's animated feature The Sorcerer is a wild journey through the absurd and surrealist universe of Panamanian artist Julio Zachrisson.

In addition to meetings with potential partners and investors during HAF, WIP Lab shortlisted projects are also entitled to compete for three post-production awards: the Wanda WIP Lab Award presented by Wanda Media, offering a cash price of HK$100,000 to encourage the development of outstanding cinema; the G2D Post-Production Award and the White Light Post-Production Award each offering in-kind post-production services that is worth pproximately HK$117,300 each.

For the second consecutive year, HAF will collaborate with Marche du Film, Festival de Cannes, to present an important programme offering market screening and pitch opportunities for up to five projects at this year's Cannes Film Festival in May. "HAF Goes to Cannes" presents opportunities for filmmakers to look for sales agents, distributors and film festivals. Priority will be given to WIP Lab projects. Beijing Nicefilm Technology, a TV and film production company in China, will provide a travelling subsidy of HK$100,000 in total to the projects selected for "HAF Goes to Cannes".

"The increase in applications this year and the 10 selected shortlisted film projects reflect the growing interest by filmmakers in Asia and from around the world in the Hong Kong - Asia Film Financing Forum's Work-in-Progress Lab," said Jacob Wong, Curator of the Hong Kong International Film Festival Society and Director of the HAF. "These exceptional projects represent a wide variety of cultures, languages and societies, and HAF is proud to offer a platform for these filmmakers to present their works to film-industry professsionals," Wong said. "In addition, we look forward to working again with Marche du Film and offering a showcase for these independent filmmakers at Cannes this May."