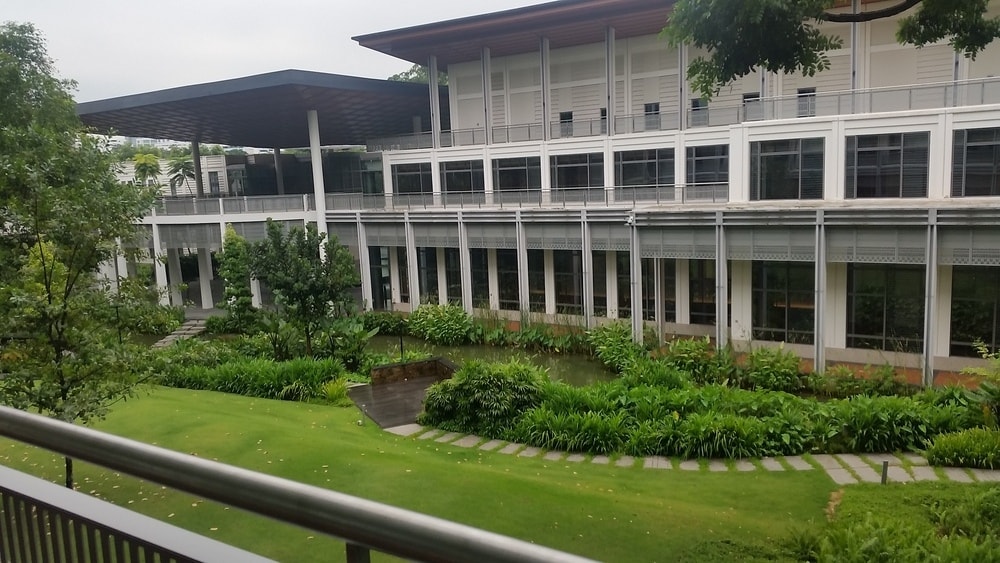 A visit to Yale-NUS College along Dover Road resulted in a unique sight: In the centre of the campus stands a towering tree, Margaritaria indica, the only one of its kind in Singapore.

This extremely rare tree, whose orange bark stands out, was discovered in 2012 when land was being cleared to shape and build the college. It was conferred a Heritage Tree status by the National Parks Board two years later.
The tree is widely seen in India, Sri Lanka, Myanmar, Thailand, north Vietnam, south China, Taiwan and North Queensland in Australia. It can grow up to 30m, is leafy and has multiple trunks.

Today it stands majestically on the grounds of the former Warren Golf Club, which was relocated to its current location at Choa Chu Kang in 2000.

Indeed the tree, the eco-pond beside it and the surrounding lush greenery add grandeur to Yale-NUS’ 64,000 square meter modern campus, which is impressive with three residential colleges, 1,000 student rooms, seminar rooms, 30 sky gardens, a black box theater, a performance hall, art studios and dining halls among other facilities.

Brilliantly designed by Pelli Clarke Pelli of the United States and Forum Architects of Singapore, nature and maximum use of natural landscape form the core of the construction of this liberal arts college.

For instance, the two-level library stands on the top of a small hill, symbolizing that the knowledge created within those environs will flow on to the rest of the campus.

It has several cosy couches and corners where students can work without any hindrance and at ease. There are many windows too which open into the picturesque Campus Green, which has different layers of plants that are cultivated to resemble a multi-layered tropical forest.

The residential colleges Saga, Elm and Cendana each has a central courtyard. On it are strategically placed trees and plants which have been selected for their botanical, historical and cultural significance. The Saga has rubber and nutmeg trees which are rooted in Singapore’s history, while Elm showcases ferns and palms which are special to this island. The Cendana is full of clove trees which contributed to the region’s economic development.

Unlike most colleges the world over, Yale-NUS exudes a calm and serene feel. For the students it must be a privilege to study in a setting that wonderfully integrates living and learning.

Lake Toba, so near now
Top 10 destinations for 2018: Scott Dunn’s travel forecast veers off the beaten track
To Top