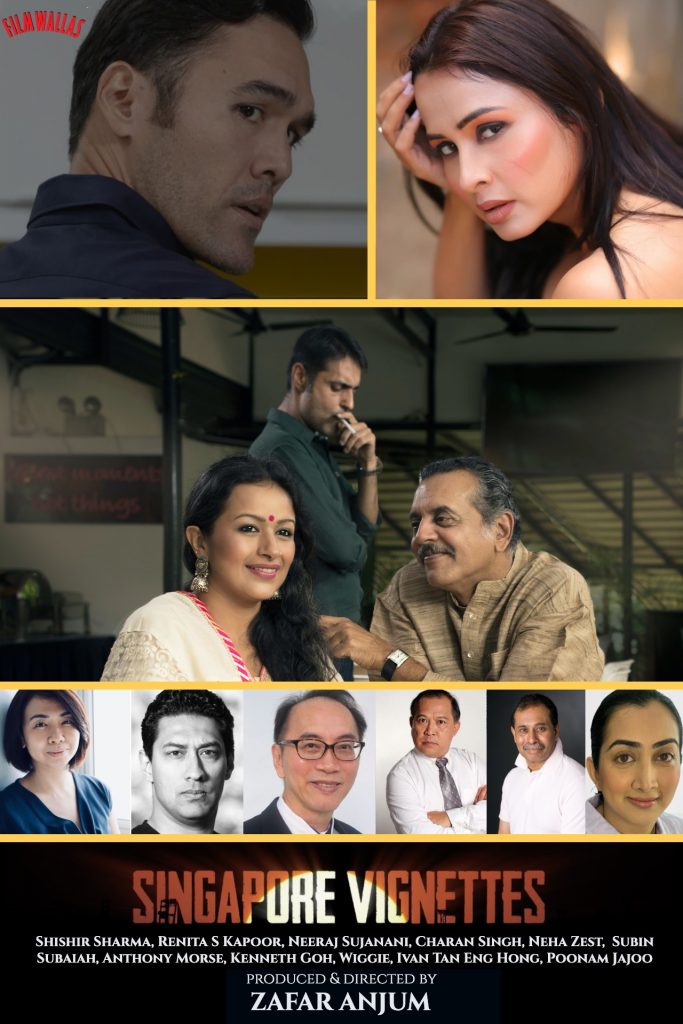 The 1 hour 7 minute effort, which features the likes of Anthony Morse, the well-known TV series show host of Hidden Cities (History Channel) and The New Silk Road (CNA, MediaCorp), and Shishir Sharma, veteran Indian film and theatre actor, is set and filmed in Singapore with local cast and crew.

Here Zafar talks to Inside Recent about why he made the film: 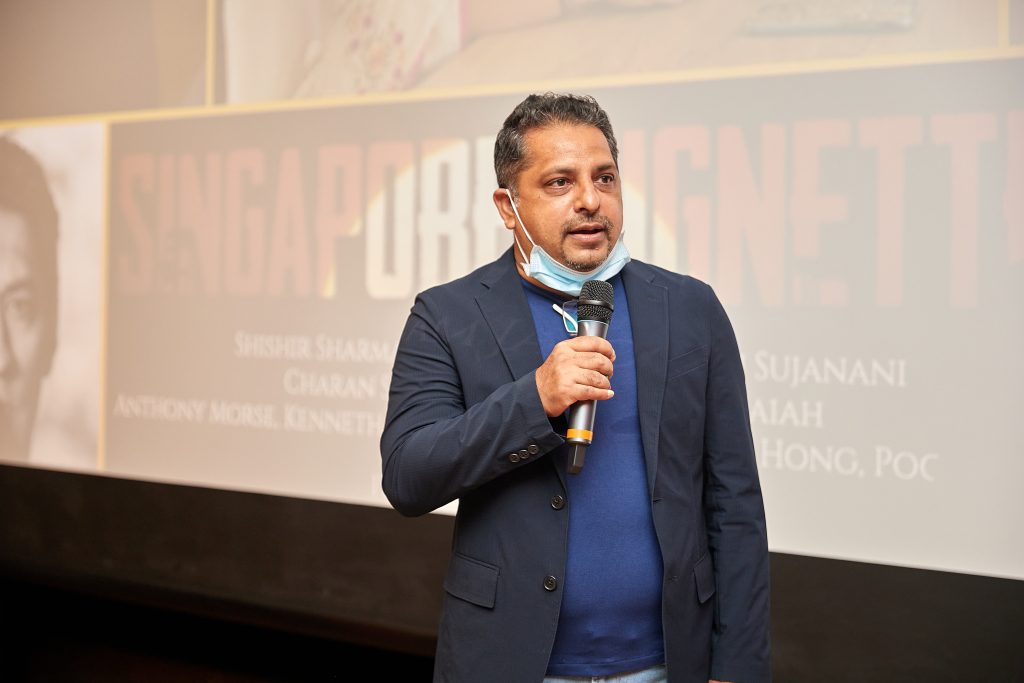 Why was it released on OTT platform?
Since it is a compendium of three short films, made on a low budget without any conventional stars, it needed to find a home on a streaming platform. When we were making these films we had no idea where they would eventually go.

In any case, ever since the Covid-19 pandemic struck the world, theatres everywhere have by and large remained shut. So, even exploring theatrical distribution was out of the question.

To be honest, I am a believer in digital and I was seeking my film’s release on a streaming platform. Streaming enables it to reach millions of people across the world and MX Player has more than 280 million users.

Why did you decide to do these films now? What is the intention?
These films have been under production for a couple of years. For example, the work on the adaptation of one of the short films, The Corporate Wolf, started in 2016. We could, however, audition actors and shoot the film only in 2018.

Similarly, More Chai Please was filmed around March 2018. Sirf Main was shot in 2019.  It was only last year that I got the time to put them together as a feature-length compendium.

The intention is to entertain people and to also present a slice of life from Singapore.

Who are the main people involved in the production?
You should see this film as an Indie production. Like they say it takes a village to raise a child, it takes many nurturing hands to make a film. When I decided to make these films, I took a leap of faith and the universe conspired to make it happen. I know it might sound cheesy and cliched but that’s what actually happened.

Many friends stepped in to help with the production. Sunita Lad Bhamray, who wrote and co-produced More Chai Please, supported the film wholeheartedly. Similarly, for Sirf Main, lead actors Shishir Sharma and Renita S Kapoor provided all kinds of support and they acted as the driving force behind the film.

For The Corporate Wolf, Anvita Gupta, who is also an actress, helped in producing the film, managing the entire production from start to end.

Documentary filmmaker Upneet Kaur-Nagpal played a similar role for More Chai Please, helping and coordinating the production. For cinematography also, many technician friends helped and I have acknowledged them all in the film’s credit.

Briefly describe the storylines.
In The Corporate Wolf, David (played by Anthony Morse), a 32-year-old, well-heeled and proud member of the elite society of Singapore, decides to adopt drastic measures to revamp his late father’s cosmetics company. He audaciously changes the company’s culture by planning to lay off his late father’s two most loyal employees, Poh (Wiggie) and Yeo (Kenneth Goh). Do Poh and Yeo take this unkind cut kindly? The Corporate Wolf is an adaptation from the prize winning Singapore Crimes Stories.

Sirf Main (Only Me) is the story of Aaarti (played by Renita S Kapoor), a middle-aged Indian woman who lives in Singapore. She is married to a wealthy businessman, Sanjeev (played by Neeraj Sujanani). When she finds out that her husband is having an affair, she is not able to live with any moral ambiguity in her life anymore. Does she leave her husband or does she choose to stay in the marriage and work on it? Her friend from her college days in India, Viren (played by Bollywood actor Shishir Sharma), who gets transferred for a job with an MNC in Singapore, helps her choose the right path. 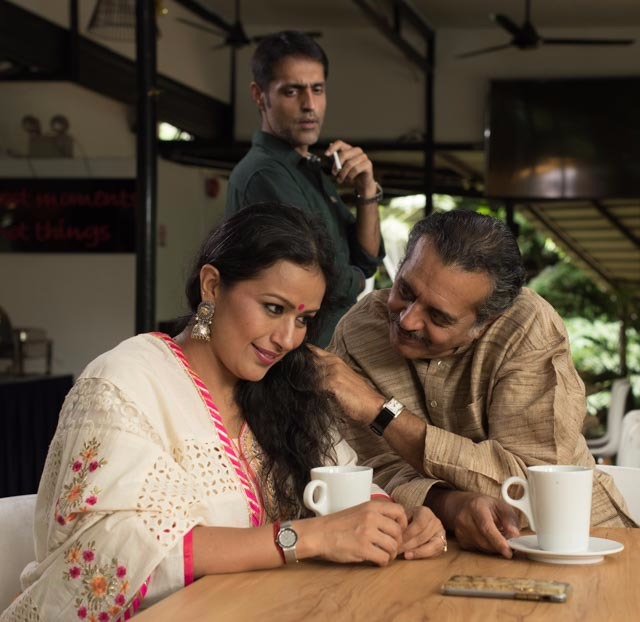 More Chai Please is about a young Muslim couple in Singapore who are about to get married. The would-be groom Salaar (played by Charan Singh) is obsessed with a tea recipe for his soon-to-be-launched café in Singapore and its search takes him to the city of Nawabs, Lucknow, India. In his absence, his fiancee Inayaa (played by Neha Zest) pines for him. Does he succeed in finding the rare recipe or does his quest lead him to discover a deeper secret about food and the finer senses? This film features veteran Singaporean theatre actor Subin Subaiah and Shishir Sharma in special appearance.

Why did you choose only locals?
We chose only locals because we wanted to promote and showcase local talent from Singapore. That has been one of my missions at Filmwallas. We were not a big budget production in any case and it made sense to keep things simple by deploying local talent.

Were the films shot in Singapore? And during Covid-19?
The films were shot entirely in Singapore. I took some transition shots in Lucknow, India, with my mobile phone when I was there for a literary festival. The shooting was completed by October 2019. We completed the editing of the last film, Sirf Main, last year during Covid-19. 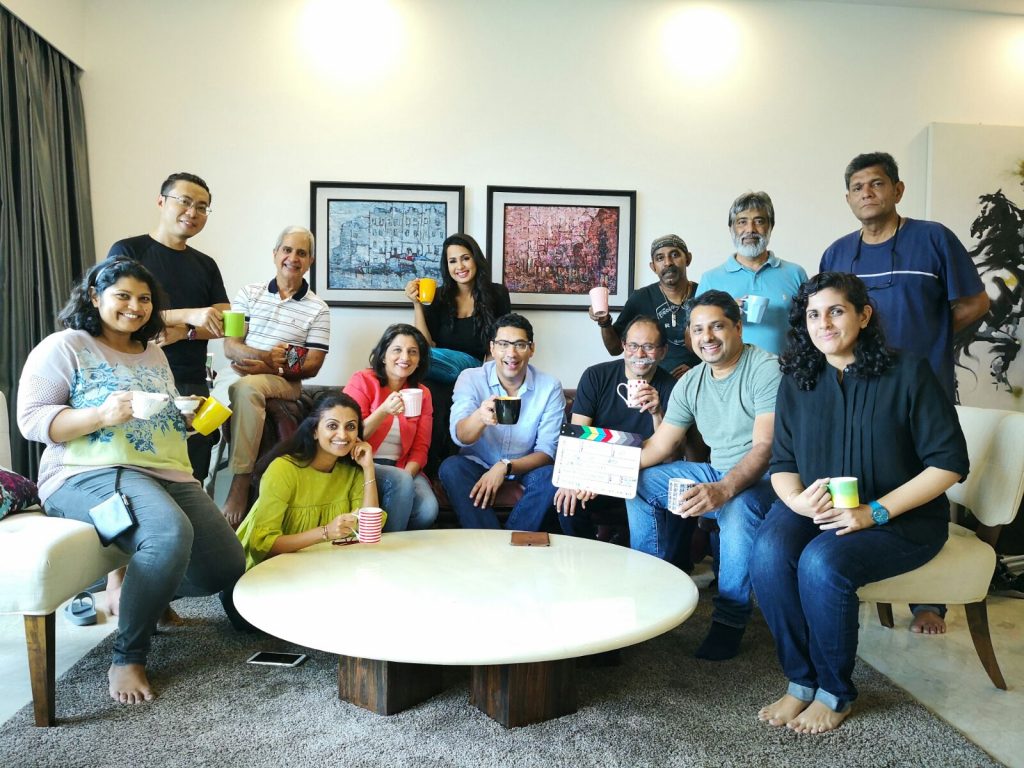 Whose idea was it to do these films?
There was no plan as such to make a film titled Singapore Vignettes. The idea sort of evolved over time. After making my first short film, The Shoes, which is almost a silent film, I wanted to adapt a story for filming. I chose The Corporate Wolfby Pranav Joshi which had been published in an anthology of crime fiction by Monsoon Books.

More Chai Please was a play by Sunita Lad Bhamray and I loved the genteel twist in the story. It was steeped in a milieu of Muslim characters who spoke Urdu and that fascinated me. You can probably say that More Chai Please is Singapore’s first Urdu short film.

I wanted to do a film with Sishir ji and Renita and that’s how Sirf Main happened. Shishir ji found a Hindi short story and sent it to me and I adapted it as a screenplay. The film has a powerful message against domestic violence and abuse and its empowering narrative appealed to me a lot. The story also had a literary lilt to it which makes it outstanding.

Why did you want to do a tribute to Singapore now?
I have been living in Singapore for over 16 years now and I always wanted to showcase Singapore the way French filmmaker Eric Rohmer used to depict Paris in his films. So, I chose stories that were set in Singapore and reflected the life of people living here. That’s why the film came to be called Singapore Vignettes. Like Rohmer’s films, the pace is sometimes slow, but it is deliberate. These films demand an immersion into their worlds.

How are the stories about the new Indian expats in Singapore distinct?
While The Corporate Wolf depicts mostly Chinese characters, the other two films show characters from the new Indian expats. The films show their ambitions and struggles on the human level even though the exterior could look slick and glossy from the outside. It gives a rare glimpse into their world.

Who are the Singaporean writers involved in the script writing?
Sunita Lad Bhamray, Mahenthiran, Angelina Pereira, Alvin Fong, and myself 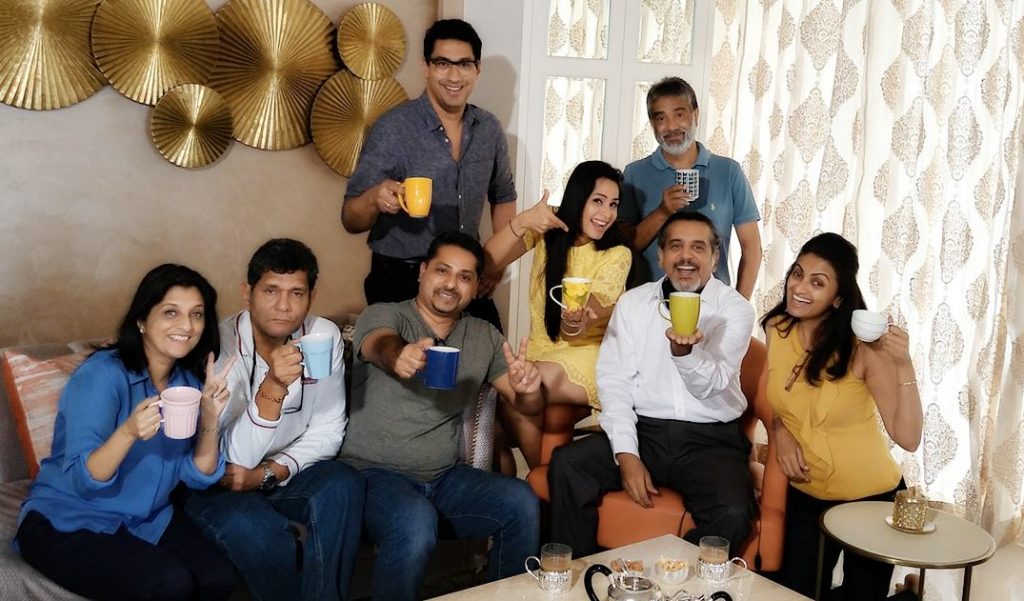 Who are the prominent actors involved?
The Corporate Wolf: Anthony Morse (the well-known TV series show host of Hidden Cities (History Channel) and The New Silk Road (CNA, MediaCorp), and Ivan Tan Eng Hong (he appears in many local ads).

What do prominent people involved in the production have to say about Singapore Vignettes?

Shishir Sharma:
“In 2017 I received a call from Zafar Anjum asking me to play a character in his short film More Chai Please. That that was the start of our friendship which also brought us together in another short film Sirf Main.

“More Chai Please was a lovely experience – working with not only Zafar bhai but also Charan Singh. It’s a very sweet and simple film bringing out the nuances of blending tea with love.

“We came together again for Sirf Main, which is a beautifully executed love story. It also shows how loneliness can actually be your friend… beautifully acted by Renita S Kapoor with support from me and Neeraj. Both the films were an experience to remember. It’s always a pleasure to collaborate with Zafar bhai and I look forward to many more films with him.” 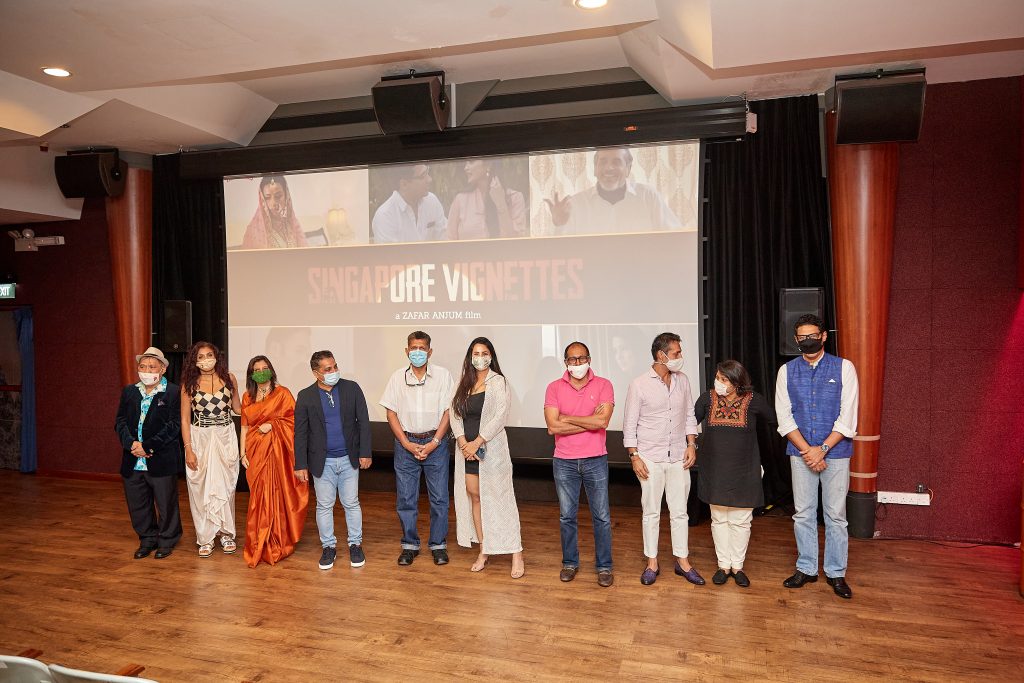 Subin Subaiah:
“The uniqueness and honesty of the Singapore Vignettes make it an endearing film. These stories connect us as a multi-faceted diaspora and showcase Singapore as the true melting pot that it is. Working with Zafar was a hugely rewarding experience. He helped me cope with the challenge of putting up a credible performance in a language, Urdu, that is extremely difficult to mouth and for that I thank him.” “Scripting a movie with a definite focus on wordplay and stylised language has always been very important to me and what better than the medium of Urdu. A lyrical and refined language, Urdu was perfect for More Chai Please.

“Furthermore, keeping in mind the theme which was related to food and food presentation, the obvious choice was to knit together the milieu of Singapore  and Lucknow. The reference to the latter, which is evocative of luxuriant feasts coupled with an old-world charm, gave the movie a unique dynamic.

“The filming, which took place entirely in Singapore was an incredible experience for me. Director Zafar Anjum was always ready for a new challenge and yet sensitive to the intricate details of the script. That gave the film its special richness. Each member of the cast was extremely talented and having them perform in this movie was an honour.

“Singapore Vignettes has showcased three stories, each of which, despite their simplicity, has attempted to honestly portray everyday life in all its quintessential vibrancy.” Why is the film not available for viewing in Singapore?

MX Player is streaming the film globally but is unfortunately not available for streaming in this region. Though in future it might become available on that platform. We will explore other platforms to put on the film too so that people in Singapore can watch the film too.

Starting with the premiere show on 11 April, we are also organising some shows in Singapore and are in talks with some charities to organise charity shows.

What’s coming on Netflix in April
Jessica Ramella wins The Apprentice: ONE Championship Edition
To Top