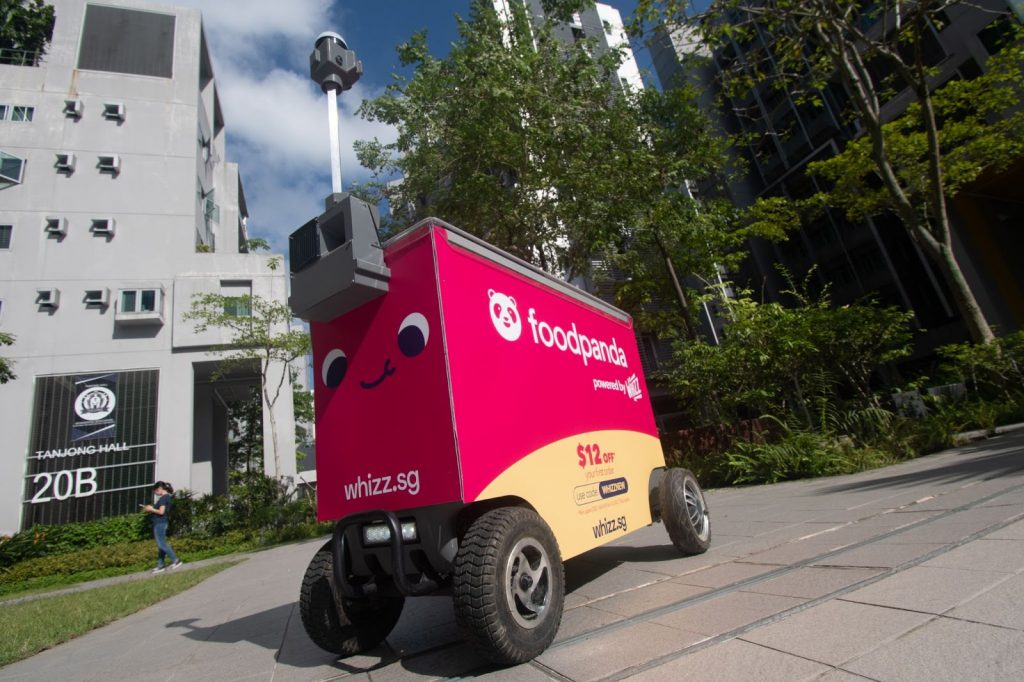 The advent of Covid-19 has led to people preferring driverless deliveries in Singapore.

This project involves parcels and groceries being delivered to the lift lobbies of seven Housing and Development Board (HDB) blocks – involving about 700 households – at Waterway Woodcress in Punggol.

“For instance, after buying groceries such as rice or diapers at a supermarket, a consumer can drop off the purchases at a concierge counter to continue shopping or dining and have them delivered to their HDB block at a time the consumer chooses,” said the Infocomm Media Development Authority (IMDA).

“Other items that could be delivered through these robot couriers include perishables such as food or flowers and even controlled items such as medicine.”

The development comes as the pandemic has pushed companies to progress toward contactless, sustainable and efficient ecosystem services.

In May, 2021, foodpanda’s rival Grab announced that it is set to pilot a robot runner service, which will help consolidate orders from several restaurants at Paya Lebar Quarter Mall in Singapore.

“These robots, which are meant to complement our riders, will allow us to increase our delivery capacity and serve more customers in a more sustainable and cost-effective way,” said a foodpanda spokesman.

The company’s autonomous delivery project began with the rollout of Whizz’s four mobility robots in May, which deliver across the entire NTU campus (across 200 hectares) in Singapore.

While the robots are self-driving, they are controlled by a back-end operator to accept orders. The trial will run until November 21, with plans to further expand within Singapore.

The company will also launch its three-month trial with Otsaw’s Camello robots in August and increase the accessibility of its services in Punggol and other areas of Singapore. For now, the robots will deliver to about 10 HDB blocks. The trial ends in October.

Meanwhile, Neolix’s autonomous vehicles, each of which can store up to 100 bento boxes, will be stocked with midday pick-me-ups such as coffee and snacks. These vehicles will be transformed into mobile convenience stores for students and staff at the National University of Singapore.

The vehicles will be trialled from July to October this year.

“The demand for delivery services is expected to increase as customers get used to the convenience that quick commerce brings,” said the foodpanda spokesman. “To ensure that we continue to offer our customers fast and affordable deliveries, we need to look at increasing efficiency by implementing the best technology into our delivery ecosystem.

“Driverless deliveries are a timely contactless delivery mode to offer our customers as it is a safer option – a demand that has grown exponentially since the pandemic.”

The striking foodpanda pink droids pick up food and other items from merchants and deliver the orders to staff and students around the NTU campus daily, from 11am to 7pm.

While the Whizz Mobility electronically-powered robots are self-driving, they are controlled by a backend operator to accept orders.

Customers who place orders will get a notification that their orders will be delivered by the robot. Merchants will then load the items into the robot. Once the robot arrives at the delivery point, customers will have to show the order proof to the camera mounted on the robot to unlock the hatch and collect their order.

OTSAW’s Camello picks up foodpanda orders from merchant partners at Punggol Oasis terrace mall and delivers them to customers in 10 surrounding HDB flats. The robot drives itself to the ground floor of the customers’ location and upon arrival sends a One-Time Pin (OTP) to the customer. Customers can then enter the OTP to open the trunk to collect their order.

Each robot weighs 80kg unloaded and is capped at “walking speeds” of about 5kmh.

When customers in NUS University Town (UTown) place their order with merchants outside, riders will pick up the orders and place them on Neolix’s autonomous vehicles at a location close to UTown. The vehicles will then deliver the order to the customer’s location.

He added: “Tapping on three different startups also allows us to take advantage of a longer trial period across different locations and to reach different demographics of foodpanda users. Of course each start up has its own unique operational model, which will enable us to evaluate which functions are more suited to our ongoing operations and future developments across our verticals.”

A Whizz Mobility spokesman said it currently employs five Foodbots in partnership with foodpanda and Cates, another food aggregator. Both partnerships operate only within NTU.

“Our foodbots are semi-autonomous, so they run on AI while being supervised by a robot supervisor,” he said. “For example, during a foodpanda delivery, the foodbot will travel on its own on straight and curved paths. However, in danger zones, like road crossings, our robot supervisor will take over until the danger zone is crossed.

Its entire team comprises 17 students. During operational hours, at least one robot supervisor and one recovery team member per shift is deployed.

“I was intrigued by the robots moving around NTU and the use of AI,” said NTU student Rakesh Agarwal. “I tried the robot out and found that it is useful in delivering food on time. Contact with other humans are also less.”

Similarly, reports suggest that OTSAW’s trial of autonomous delivery robots has benefited the residents in Punggol. Not just curious teenagers, but also the elderly are placing orders. There is now a demand to extend the trial to a wider area across the waterway in Oasis Terrace.

“The trial will assess artificial intelligence technologies for autonomous navigation, obstacle detection and avoidance, communications systems and road networks and business models for commercial viability,” said an OTSAW spokesman.
“What we have learnt from the trial is that the walkways are wide enough for Camello and humans to coexist. We are hoping to expand to more areas as Camello is capable of travelling up and down ramps.

“We are looking forward to having multiple Camello robots serving more people in Singapore and have been communicating with the relevant authorities on this.”

“This multi-sensor suction sensing enables the autonomous vehicle to ‘see’ the surroundings (objects and obstacles) and drive itself without human intervention,” said a company spokesman. “Also, the vehicle relies on the GPS signal for localisation to ensure centimetre-level positioning accuracy.

“Finally, the self-driving performance is based on deep learning to provide decision planning for the autonomous vehicle.”
The modular container box design of the Neolix autonomous vehicle enables it to be adapted for various functionalities and to accommodate multiple consumption scenarios, such as food delivery, parcel logistics, food cart, security patrol and vending machine.

Hundreds of Neolix autonomous vehicles have been deployed for delivery operations in China, particularly in partnerships with global F&B brands such as KFC, Pizza Hut and Yoshinoya.

In all, more than 400 Neolix autonomous vehicles have been deployed globally, in eight countries and 30 cities, across 100 scenarios.

“Neolix will be expanding its autonomous vehicle fleet operation in Singapore,” said the spokesman. “We are targeting to expand to over 100 vehicles within the next few years.

Given that Covid-19 is likely to linger for many more years, autonomous vehicles will shape the new way of life for future smart cities, in which they will be the mobile service platform to serve as intelligent food carts and retail stores for consumers.

“Employing technology to explore alternate and innovative modes of delivery is one way Singapore builds a world-class urban logistics system that also enhances land and labour productivity,” he said.