Embark on a seamless journey through Singapore’s heritage and culture with one easy-to-use-website.

The National Heritage Board (NHB) has relaunched its heritage portal, Roots.gov.sg, as a one-stop digital concierge, with a cultural ontology that brings together digital resources from across Singapore’s arts and culture scene, including the National Library Board’s Infopedia and the Esplanade – Theatres on the Bay’s Offstage.

After its first major revamp since its launch in 2016, Roots.gov.sg will offer fresh content and more features and keep up with current digital trends.

The AI-powered search also provides more opportunities to explore lesser-known stories of Singapore’s history and heritage by suggesting exploratory routes based on individual users’ interests. Casual visitors can use these suggested paths to delve deeper into Singapore’s heritage, while researchers will benefit from more effective and efficient information gathering.

For example, visitors reading about the history of the Sultan Mosque will also find recommended articles about the features of Islamic architecture and places around the mosque. Its cultural ontology of resources will also allow visitors seeking to learn about renowned composer Zubir Said, for example, to tap into the Esplanade’s Offstage website and view the content of performers associated with him.

In conjunction with the relaunch, NHB will be staging Roots.gov.sg’s first virtual treasure hunt, titled Heritage Hunter, from 12 to 31 March 2021. Participants will have to solve clues and trawl the pages of Roots.gov.sg for hidden coins for a chance to win exciting prizes, including a tablet worth $1,099.

Heritage Hunter will take participants on a journey through different eras and aspects of Singapore’s rich history and heritage. For more information, visit NHB’s Facebook page.

The AI-powered search prompts visitors to explore topics that are of interest to them more deeply, by offering quick links to related stories and other collections. This makes it even easier to trawl through the website, which is home to over 100,000 artefacts and multimedia resources from the National Collection which have been digitalised and are easily accessible to all. Learn About Our Intangible Cultural Heritage

Visitors exploring Intangible Cultural Heritage (ICH) will also find suggestions of artefacts, places and people
related to particular ICH elements, creating a seamless link between Our Cultures, Our Treasures, Our Places and Our Communities.

Roots.gov.sg hosts a treasure trove of Singapore’s ICH, where visitors can learn more about living expressions inherited from our forefathers and passed down the generations. The ICH inventory seeks to identify and document the diverse elements of intangible cultural heritage that are practised in multicultural Singapore and is grouped into six categories: Social practices, rituals and festival events; knowledge and practices concerning nature and the universe; oral traditions and expressions; performing arts; traditional craftsmanship; and food heritage.

Here are some of the latest additions to Singapore’s ICH inventory, which now consists of 97 elements:

Zapin
Upbeat and expressive, zapin is one of the most popular dance and musical forms in traditional Malay performing arts. Elegant dance movements are choreographed to lively melodies, which are performed using musical instruments such as the gambus (short-necked lute), accordion and rebana. 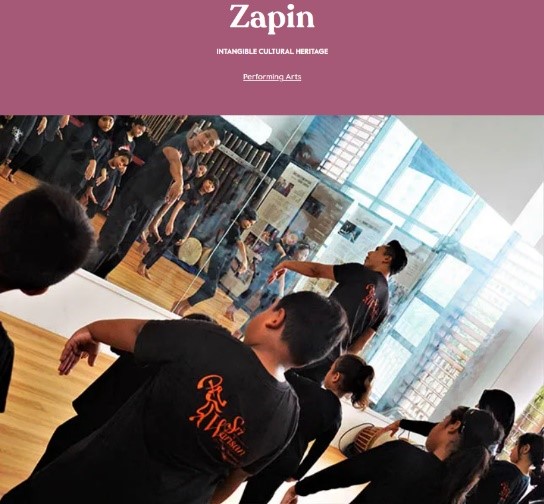 Making of Chinese Signboards
Traditionally, signboards are hung above the entrances and doors of Chinese temples, clan associations, businesses, schools and even private homes. Skilled Chinese migrants brought the ancient craft of signboard making to Singapore when they arrived from China in the 19th century.

In the 1960s, most traditional signboard makers were found on Pekin Street (presently a glass-covered walkway), a thoroughfare connecting China Street and Telok Ayer Street where woodworkers and carpenters once congregated. Today, only one traditional signboard maker remains active in Singapore. Find out more here: https://www.roots.gov.sg/ich-landing/ich/making-of-chinese-signboards

Making of Flower Garlands
Flowers play a central role in Hindu religious and cultural practices and significant life events. Whether in temples or at home, flower garlands are frequently used in worship, which is also known as puja (“worship” in Sanskrit). Garlands of various flowers and leaves are offered to deities and adorn their statues or images. In other religious, cultural and secular functions, flower garlands are used for decorative purposes and also presented to people as a sign of blessing and honour. The demand for flower garlands remains high in Singapore, particularly during Hindu religious festive periods. While there are concerns about the declining industry due to few from the younger generation taking up the craft, and imported pre-packed garlands in the market, some entrepreneurial business owners have made attempts to stay current by bringing their flower garland-making businesses onto digital platforms. Find out more here: https://www.roots.gov.sg/ich-landing/ich/making-of-flower-garlands

Roots.gov.sg is now integrated with Google Maps for seamless navigation, online and on the ground. Visitors can also filter places of heritage interest according to categories that include archaeological sites, places of worship, historic site markers and more.

Hougang Heritage Trail
Did you know that “Au Kang” means “at the back of the river” in both Teochew and Hokkien? The name is a reference to Sungei Serangoon at the end of Upper Serangoon Road, around which many Teochew-speaking inhabitants settled. Hougang is the Mandarin version of the phrase, introduced in 1980 for the new residential town which was being built at the time.

While the old Teochew pronunciation has endured and the Teochew community continues to have a strong presence in the area, much has changed. A diverse mix of other communities and cultures has also flourished and continues to accentuate the colourful character of one of Singapore’s oldest towns. From tales of crocodile and pirate attacks, to Singapore’s first fast food restaurant in a housing estate, the Hougang Heritage Trail, consisting of 18 heritage sites with 10 trail markers, uncovers a treasure trove of lesser-known stories of an area steeped in history, over three thematic trail routes:
* Landmarks of Hougang
* Institutions of Service
* Architectural Gems

Pasir Ris Heritage Trail
Before Wild Wild Wet and Downtown East, many Singaporeans were already flocking to the east to unwind at the Golden Palace Holiday Resort, one of the many recreational options in Pasir Ris. With its sea views, sandy beaches and laid-back vibe, Pasir Ris has a long history as a destination for leisure and play that stretches back to the late 1800s. The name “Pasir Ris” is believed to be derived from the Malay words pasir and hiris, which mean “sand” and “to slice or shred” respectively. Consisting of 23 heritage sites with seven trail markers, the Pasir Ris Heritage Trail will show how the area’s history is inextricably linked to its coastline and proximity to the sea.Visitors can explore Pasir Ris over three thematic routes:
* Coastal Heritage
* Play @ Pasir Ris
* Architectural Highlights

Roots.gov.sg’s integration with Google Maps enables fuss-free exploration of the National Monuments by enabling easy navigation on the ground and online previews through Google Street View. Visitors can learn about the National Monuments online before exploring them on-site or virtually discover those that are not fully accessible to the public.

National Monuments are buildings and sites that are accorded the highest level of protection in Singapore and are an integral part of our built heritage. Spread across the island, the 73 National Monuments have many rich, fascinating stories. Here are a few that you may not be familiar with: * The Tanjong Pagar Railway Station used to be a passenger station for trains run by Malaysian rail operator Keretapi Tanah Melayu (KTM).
* The three-storey station was designed by Serbian architect D S Petrovitch of architectural firm Swan & Maclaren, who drew upon a range of influences
including the Art Deco, neoclassical and local styles of design.
* The station was closed officially in July 2011, when the Sultan of Johor Ibrahim Iskandar piloted the last train’s departure from the station to Johor Baru
Sentral in a ceremony witnessed by a large crowd.
*For more than 60 years, the upper floors of the station housed a 34-room hotel operated by Lim Jit Chin and his family. In 1992, Lim received a letter from the Guinness Book of World Records acknowledging him as the second-longest serving hotel manager in the world.
* Date of gazette as a National Monument: April 2011 * Standing atop a little hill, the church was originally constructed for the spiritual needs of the Hokkien-speaking Catholics living in the town area, and
testifies to the growth of the local Chinese Catholic community in the early twentieth century.
* The Church of Saint Teresa is the only Catholic building in Singapore built in the Romano-Byzantine style, which is defined by the extensive use of grand
domes, cupolas and arches.
* The church sheltered many stranded Caucasians during the 1950 Maria Hertogh riots; gave relief and shelter to the people made homeless by the Bukit
Ho Swee fire in 1961, the biggest fire in Singapore to date; and has provided educational and social welfare services over the years.
* Date of gazette as a National Monument: 2009

Former Nagore Dargah
* An actual shrine (or dargah) to the Tamil Sufi holy man Shahul Hamid is located in a town in Tamil Nadu called Nagore. To continue their tradition of venerating their beloved saint even when they were away from home, the Chulia pioneers from the Coromandel Coast in South India built a shrine on Telok Ayer Street and named it Shahul Hamid Dargah.
* Although the shrine, later renamed Nagore Dargah, commemorates Shahul Hamid, bodily relics of the Sufi saint are not enshrined there.
* Besides minarets and crescent-and-star motifs commonly found in mosques, the building also features fluted Corinthian and Doric pilasters on the façades, as well as Doric columns and arches inside, which are western design features.
* Date of gazette as a National Monument: November 1974.