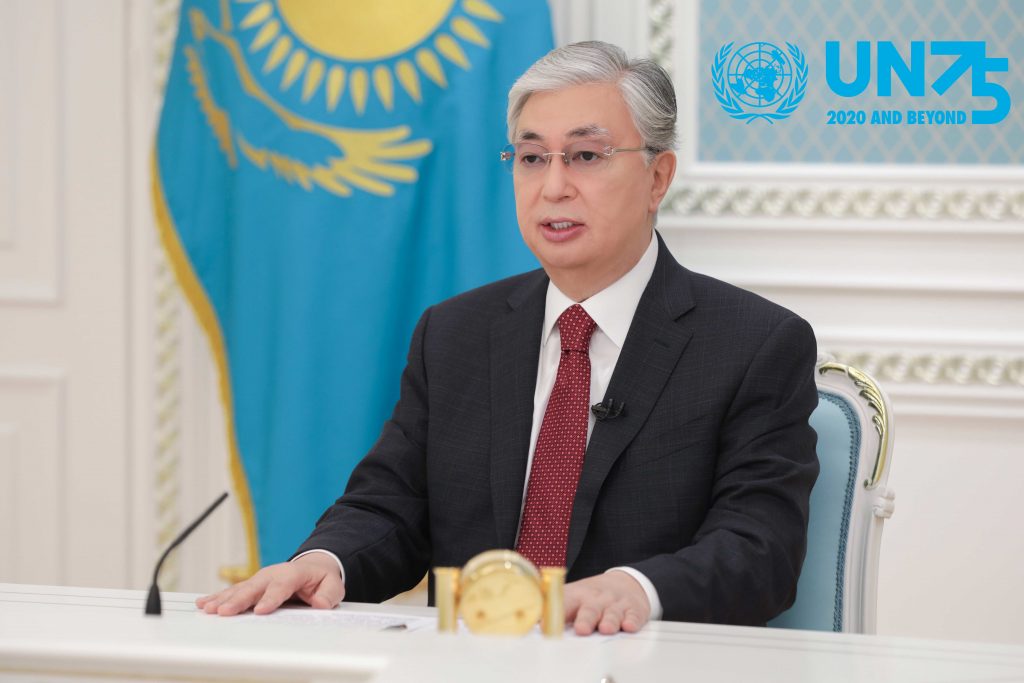 Kazakhstan President Kassym-Jomart Tokayev (above) addressed the General Debate at the anniversary session of the UN General Assembly through a pre-recorded video message.

He said that the 75th anniversary of the UN is taking place in a dramatic and critical time. According to the President, the greatest challenge remains the coronavirus pandemic, which is causing deep suffering among the people around the world and has seriously affected the global economy.

“In the wake of this unprecedented human tragedy, on behalf of the people of my country, I extend our profound gratitude to all medical professionals and frontline staff who work very hard to protect us,” the President said.

Mr Tokayev believes that the growth of trade protectionism and political nationalism has caused critical collapse of global cooperation and led to “global dysfunction”, which in turn undermines the prospects and hopes for a better world.

He called for reflection on the moral obligation to build a “New World” and expressed the opinion that humanity has now reached a make-or-break moment.

A symbolic moment in the President’s speech was him quoting in the Kazakh language the famous statement of the great Kazakh poet and philosopher Abai Kunanbayuly, who proposed his own formula on global interaction.

The President said the international community needs to do more to combat the pandemic.

To build a strong global health system, priority must be given to upgrading national health institutions through timely and coordinated support from developed countries and UN agencies.

He said that it is important to take politics out of vaccine development, noting the need for a comprehensive international agreement on trade and investment that would protect global production of the COVID-19 vaccine and supply chains.

The Head of State believes that it may be necessary to revise the International Health Regulations to increase the World Health Organisation’s capacity and to develop national capabilities in preventing and responding to diseases.

Mr Tokayev also suggested closely examining the idea of creating a network of Regional Centres for Disease Control and Biosafety under the UN auspices. The President expressed readiness to host such a regional centre in Kazakhstan.

Kazakhstan’s President also noted the urgency to develop and launch a biological weapons control system and proposed the establishment of a special multilateral body – the International Agency for Biological Safety.

He shared his vision for global economic recovery and joined UN Secretary-General António Guterres’s call for a rescue package amounting to 10% of the world economy. He supported Mr Guterres’s view that the response to the pandemic should be based on a New Global Deal to create equal and broader opportunities for all.

In his speech, Mr Tokayev also touched on issues related to the implementation of the 2030 Agenda. He said the very basic target is zero hunger to be provided unconditionally on the planet.

He announced the readiness of the Islamic Organisation for Food Security, initiated by Kazakhstan, to assist the international humanitarian campaign through the creation of food reserves.

At the same time, Mr Tokayev noted the contribution of volunteers, which this year demonstrated numerous examples of inspiring, strong solidarity around the world.

“To acknowledge the role of volunteers, I propose the United Nations to proclaim an International Year of Mobilising Volunteers for Development,” the Kazakhstan President said.

Mr Tokayev pointed to the ongoing nuclear non-proliferation and disarmament crisis. He expressed the hope that all Member States will join the appeal to nuclear powers to take necessary and urgent measures to save the humankind from a nuclear disaster.

He urged all P5 countries to ratify the respective Protocols to the Nuclear-Weapon-Free-Zone Treaties, including Semipalatinsk Treaty.

The Head of State also focused on environmental issues, especially climate change, which, in his opinion, is a sort of “threat multiplier”.

He reaffirmed Kazakhstan’s strong commitment to developing a decarbonised economy, despite its high dependence on fossil fuels.

“We will reduce our greenhouse gas emissions by 15% by 2030 through economic overhaul and industrial modernisation. And in the next five years we will plant more than two billion trees,” the Kazakhstan President emphasised.

President Tokayev said that in order to address these global crises we need to restore an atmosphere of trust between Member States and strengthen multilateral institutions.

“Lack of trust between nations has become toxic for international relations. It is a moral duty to demonstrate our commitment to the basic purposes and principles of the UN Charter,” he said.

Mr Tokayev recalled the need to create a unified coalition to counter international terrorism and invited all countries to join the Code of Conduct for Achieving a World Free of Terrorism.

Speaking about the causes of global challenges and threats, the President expressed the opinion that each of these are in fact a governance challenge.

“To achieve truly just and people-centreed world, measures at the international stage should be accompanied by the dedicated efforts at the national level,” he said.

In this context, the Head of State said that Kazakhstan is determined to build an economically strong, democratically advanced and human-oriented “Listening State”.

Mr Tokayev touched upon the issue of strengthening regional cooperation in Central Asia, expressing confidence that a prosperous, strong and united Central Asia is beneficial both for regional and global stakeholders.

The President also proposed creating a regional water and energy consortium, activities of which will be aimed at the rational use of trans-boundary water resources.

He also announced his intention to institutionalise a UN-led regional SDGs Center in Almaty to coordinate the development agenda in Central Asia.

Concluding his speech, President Tokayev stressed that Kazakhstan will always remain a strong supporter of the UN and will actively participate in fulfilling our collective aspiration for a better and happier future.